Leave house. Walk through ginnel at end of road.

Wander down deserted path to the bridge, breathing fumes from the many BBQs:

No need to carry a case of beer with me today!

'Ahoy there, me hearties', as BG would say following his brain transplant. This used to be a smart looking place. Perhaps some of us didn't stop there often enough. Curiously, it's a good half mile from the nearest water.

Whilst Her Majesty is sunning herself in Sulawesi on the pretence of testing the waterproof cover for her Canon G9, I am left to stroll around in the Cheshire sunshine.  It's a pleasant diversion during one of those periods when illnesses and funerals of friends and relatives have been at the forefront of the mind.

This entry is a minor indulgence, so if you aren't interested in my rather mundane observations and very average images taken with the failing S70, you should skip this, though you will find a mouth watering kit summary somewhere below!

Let me take you on this short rural excursion:

We start in Highfield Road, Lymm (SJ 673 868), a 20 minute drive from Timperley.  A snicket opposite the junction with Hardy Road leads immediately into lush Cheshire countryside and a field of wheat.

Well, it was a field of wheat!

Reaching Booth's Lane we bear right to join Massey Brook Lane.  Heading left down here, we soon go under the M6.  The bridge frames the quiet Cheshire lane quite nicely.

Passing Massey Brook Farm and Thelwall Grange, we pause to admire the Hedge Bindweed (Calystegia sepium)  and the familiar fruit of the Bramble  with its succulent scientific name - Rubus fruticosus.

Highfields Farm is by the junction of Massey Brook Lane, Halfacre Lane and Weaste Lane.  We turn left down an unnamed bridleway that those 'in the know' call Cinder Lane.

A young collared dove coos from its overhead perch, reluctant to move from this sunny spot.

After a while the main A50 road is reached.  Turning right down the welcome footpath, the view of this pond is much better than that of the road.  We look for servicemen, and weird people testing stoves, but they have not reached these parts yet.

One Big Disappointment today:
No butterflies!

After 10 minutes, well past some noisy kennels, a broken footpath sign points us right, beside a pleasant hedgerow.  There's some fading Meadow Thistle here, and the hedge is positively dripping with the bright red berries of Hawthorn (Crataegus monogyna).

Passing through another snicket between houses, we reach Weaste Lane, where we turn right for a few yards before going left to cross a field.   Hogweed (Heracleum sphondylium) is still in full bloom here, as is White Dead-nettle and strongly scented Chamomile (Chamaemelum nobile).

After a few minutes Pickering's Bridge, spanning the Bridgewater Canal (a historic waterway dating from 1759), is reached.  Here's the view from the bridge - quite a few barges are on manoeuvres.

We've been walking for nearly an hour now.  The sun has been beating down (doesn't it always?) and some refreshment is needed.  Time to settle down for lunch.  Here's the kit:

A gear review won't go amiss here.  The base weight of all this kit is 1400 grammes, which is just about manageable.  In addition we have the weight of the butties (but not for long - if we don't eat them, the mallards will make short work of them).  We could of (sic) brought one of our 57 varieties of cooking stove, but the flask is quick and reliable, and eminently suitable for a stroll of this arduosity.  In today's heat, though, the tea takes rather longer than we would of (sic) liked to cool down to a drinkable temperature.  Perhaps we should of (sic) brought a case of beer instead, but carrying that without a Slow Man to act as a porter can be oh so exhausting!

The map and compass are there to keep us on the straight and narrow, and the whistle is for seeking help when we stray from that course.  When things get really bad, we can of course use the penknife to construct a shelter whilst we ponder 'why didn't we ever get one of those wonderful 'Spot' gadgets?'

The specs come out after the shelter has been constructed and usually give rise to a completely different interpretation of the map. This can be useful.

Since we may be misplaced for some time, and want to record images of our surroundings, the spare camera battery is obviously essential, as is the sun/rain hat which quadruples as a full set of waterproofs and, if darkness were to fall, a tarp.

All this fits neatly into the old MEC bag.

Anyway, if you've followed these route instructions, you shouldn't be lost.  This walk is actually suitable for novice hillwalkers, and with its altitude gain and loss of 50 metres (mainly crossing bridges) it is suitable for those from the Flat Lands to the south and the east.  So don't be put off by the long list of gear - it's due to our 'double safety margin' approach.

Replete from lunch (there is a bench about 200 metres down the canal to the west) we continue along the path after crossing the bridge, and after a few yards reach the Warrington-Altrincham rail link.  This dates from 1853 but now has no trains, so it is safe to turn right down the wheelchair ramp (yes, this walk is - mostly - suitable for wheelchair users) onto the path known as the Trans Pennine Trail that links Southport with Hornsea.

The trees today are laden with lush green leaves, so the path is dark under this late summer canopy.  Jays flutter in the branches, wood pigeons clatter around, and kestrels hover over nearby fields.  Huge wands of berry laden branches strive to get a view of the bright sunshine.

Others have given up that quest and are tinged with the first signs of autumn.

Red Clover lines the track, and the hedges are filled with dark red rose hips.  Here's a particularly succulent specimen.

Most people who have listened to motorway traffic news will have heard of the dreaded 'Thelwall Viaduct' on the M6.  It's about 400 metres away at this point, but largely unseen and unheard.  A minor road does pass over our path though.  Local people hereabouts are quite 'horsey', and have wisely provided a headache avoidance kit.

Whilst Hawkweed is also abundant beside the old railway, and Himalayan Balsam is rampant in the wet woodland below the embankments, Rosebay Willowherb (Epilobium angustifolium) reigns supreme today, with silky plumes attached to its seeds, ready to spread its influence far and wide.

Some is still in flower.

Having walked under the M6, we leave the quiet sanctity of the old railway at the first footbridge.  A left turn to a hostelry may be your choice at this point, but today we turn right over the bridge and take a last glance at the old trackless track - trying to conjure images of steamy, whistling engines from the past.

The path bends tightly in front of some pretty cottages before leading back to the canal, whence a right turn leads to a cobbled ramp up to the main A56 road.  Turn left, cross with care, and Highfield Road is the second turn on the right.  The car should have been safe up here, whilst we enjoyed the 7.5 km stroll, which has  taken us 1.5 to 2 hours.

Then, back at home, it's time to raid the apple tree

I've noticed that the G10 was announced yesterday. It should be available in the UK in November, though the staff in Wildings, Manchester, had not heard the news yesterday and told me that 'even if it is announced today' (it was) 'it will take until February or March to reach the UK'.

However, Park Cameras and Amazon both expect to have it, for £449, on 31 October, but note that the 'release date' is subject to change.

I would hope to get one from my local retailer, who is always on hand to provide help and advice, and offers prices that compete with the internet and include a 3 year guarantee.

I've been quoted nearly £90 for the repair to my old Powershot S70, so will probably soldier on with it in its broken condition (I have to hold the lens cover very firmly open to make the camera work, as the retaining spring has broken) unless I can get a cheap repair, until I can get my hands on a G10. I already have a brand new CCS protective case for it, thanks to Peewiglet's Plog, and RK Photographic.

I'm tempted to get a DSLR camera, but the bulk and weight - and the excellence of the Powershot range - leads me to favour the latter. The G10 will be more than adequate for my limited skills at taking snapshots. It's the journey I like; the photographic record is an incidental, albeit enjoyable, by-product - not an objective in its own right.

The cheapest I have found is £337 at Digitalrev (unknown provenance) - possibly around £400 when card and warranty, etc are added.

Here is the original photo - it's a picture of Schlegeisspeicher in the Zillertal Alps, taken last year. 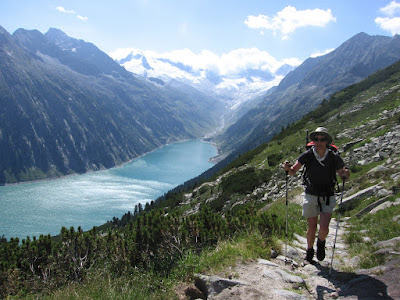 Here is the same image as that loaded by Windows Live Writer in the previous blog. Live Writer loaded it in 10 seconds and reduced the size from 90 Kb to 59 Kb. 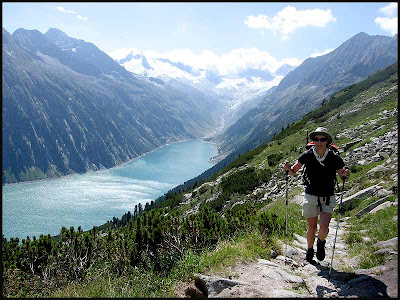 Curiously, blogger has converted this smaller image to 27 KB (actually 26,755 bytes) - exactly the same size as the conversion of the much larger original image. It took 3 seconds to load.

So assuming uploading results in no further changes, it seems that the image uploaded using Windows Live Writer (see below) is more than twice the size than the images loaded directly to Blogger. I wonder if there is any discernible difference in quality?

I suppose this also means the camera being used to produce images for blogging does not necessarily have to be very powerful, its shooting functions and flexibility (not to mention the skill of the operator - both with the camera and subsequently with any computer driven adjustments) being more important.

Here's an image that was adjusted slightly and reduced to 90Kb before being loaded here.

The following blog will explain more.