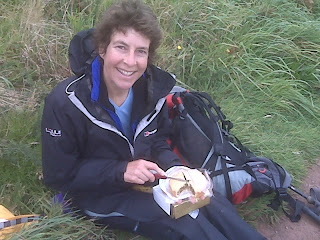 An exciting hour lurching down narrow Devon lanes on the top deck of a bus was just one of several modes of transport today.

The SWCP encounters several estuaries hereabouts, and some ferries have already stopped for the winter.

Forecast rain appeared only in brief flurries, and with a following wind we 'stormed' along.

Long refreshment stops at Monty's in Plymouth and the Old Mill in Wembury restrained us to within 45 minutes of our taxi rendezvous. Dolphin and whale rescues, and 3 vessels in trouble, proved a distraction but turned out to be training/hoaxes.

A hedge provided shelter before the taxi arrived 30 minutes early.

Sue, at Cellars B&B, kindly lifted us to The Ship in Noss Mayo, where we contributed to the upkeep of the owners' Bentley and Range Rover. Then it was back to our 'house in the garden' of this B&B, which itself is one third of the 'summer house' built in 1882 for the Lady of the Manor.

For what seems like many years, a group of us have been traipsing our way around the South West Coast Path (SWCP). It has provided a most enjoyable interlude every late May Bank Holiday. Last year it was a bit of a rush to leave Montrose after the TGO Challenge and start walking in Devon the following day, so this year we have delayed our SWCP trip until now.

Having completed the north Devon and Cornish sections, today we are off to stay in Exeter before making our way to Plymouth to walk to Torcross over the next four days, staying in B&Bs.

It will be a sociable trip. My challenge is to send just one picture a day and limit the posting to 200 words. A true 'Postcard' indeed. You may even get one from Nallo Lady.

This blog enjoyed its first birthday on 1 October.

The purpose has I think been achieved, principally on our two long trips.  Firstly 7 weeks in New Zealand, when regular visits to internet cafés kept us in touch with home, then in the Alps when a new 'phone and the wonderful Italian telecommunication facilities kept us in daily contact with the UK.  In the meantime, the TGO Challenge proved an excellent trip on which to test 'mobile blogging', and many happy hours have been spent behind this desk in Timperley.

The blog has enjoyed about 18,000 page loads over the year.  That comprises mainly returning 'visitors' who 'follow' the blog.  A new Google widget has provided these with a means of identification, and 4 people admit to being 'followers'.  There are currently a further 17 'subscribers' - more or less the same thing.   In the context of 'outdoor blogs' this makes the Outdoor Activities a very minor player in comparison with people like Lighthiker, who has over 200 subscribers for his popular treatises on lightweight gear and his adventures with that gear.  Lighthiker (Roman - from Munich) also demonstrates the lack of geographical frontiers when it comes to blogging.  He writes very well in English, as shown yesterday in his observations regarding blogging as a new form of journalism.

I don't regard this as journalism.  No way!  But the blog can be a useful resource to others.  Any posting regarding gear tends to receive a disproportionate amount of attention.  So entries relating to gear should be carefully and truthfully constructed.  Poetic licence should be saved for other topics!  Incidentally, I can't see who is viewing the blog, but the statcounter widget does provide a record of the last 500 page loads - the identities of the pages the visitors have looked at, and various other information including the geographical location of their server.  Thus I know that the page most regularly viewed - Il-Quccija - A Maltese Celebration has nothing to do with the outdoors - it's just something obscure that I wrote about, that Maltese people with young children find a need to learn about on almost a daily basis.

I know I found some useful blogs with current information when I (very briefly) did a bit of research for our Alps trip.  I don't think the postings here provide very much useful information about the detail of such trips, but I hope they give a feel for what might be expected from such things as a visit to New Zealand, an Alpine backpack, the TGO Challenge, etc.  I plan to create some further 'resource' entries, perhaps by way of separate blogs - this seems to me to have the advantage in some respects over regular web pages, in that a blog has the capacity for comments to be made in a 'forum' style, thus providing a dynamic, interactive means of communication rather than a 'timeless' web page.  But I accept that even the interactive blogs could soon get out of date.  Fun to produce though.

Outdoors bloggers are a growing breed.  Since I started a year ago there have been numerous newcomers, and my list of 'some outdoors bloggers' becomes ever greater.

I need to add a few more names to that list - it's always good when newcomers like Mike Knipe  (pictured), with northern pies appear on the scene with their own brand of posting.  I owe Mike an apology - I promised a caving entry today - but have run out of time; he appears to be away for a while anyway.

Time to stop rambling, but not before:
1. Wishing Nick all the very best in his new job at Columbia's Shanghai office.  Those people who may get bored with postings about short local walks and other mundane events should bear in mind that one of this blog's principal raisons d' être is to keep in touch with people like Nick and a number of other 'foreign correspondents' and give them a picture from someone they know in the UK.
2. Saying "hello mum" to my most important reader.
3. Reminding folk that Sue and I also have a website, on which some of our future trips are noted on the programme, and archive pages have details of numerous past trips.  Outdoors bloggers are most welcome to join us - direct e-mail contact is easy via that website.
4. Finally, thank you to all readers of this blog, in particular to those who provide the comments and other feedback that make the whole process more enjoyable.  You know who you are.  Thank you.

View from the summit of Eccles Pike, towards Kinder Scout

It's a landmark day - the 5th anniversary of my giving up full time work. Tradition dictates a (ever shortening) walk.

It's also the first birthday of this blog, but more of that some other time. Here's my first entry, posted a year ago, when Darren was to be my first reader.

Today, setting off from the Navigation Inn at Buxworth at 12.30 meant that my lunch kit was soon on display. Together with 'winter' boots triggered by showery weather.

This view across to Chinley Churn was fine and bright though, and the sun even made a brief appearance.

Soon I was in yet another Estate owned by the National Trust.

A short, steep climb brought me to the red-rock summit of Eccles Pike, some 360 metres above sea level, with views stretching from Kinder to the north (see above), west down the lower Goyt valley, south across Coombs Moss, and east towards the limestone hills of the White Peak. There's an intricate orientation point, from which this image is a small detail.

Whilst the paths were quite boggy and I was glad of the waterproof boots, the signs were very posh. The path signed below heads across the field in the direction indicated by the arrow. Coombs Reservoir is in the distance. The lush green grass showed little sign of having been trampled. I saw just a few casual dog walkers today.

"Do Not Stray From The Path" or some such utterance, was the sign that greeted me on this section of the walk at Tunstead Milton!

The fence soon disappeared and the path led through Himalayan Balsam, and a marsh, up to Coombs Reservoir, which appeared to be full. A fleet of sailing boats lingered, inactive, on the far shore whilst ducks quacked in the foreground.

After Tunstead Farm an indistinct path led to a boggy hollow before descending pleasantly through fields to join the old Cromford and High Peak Railway. A memorial plaque commemorates the railway's incorporation in 1825.

A section of road through Whaley Bridge led me to the much renovated Peak Forest Canal and an easy walk back to the start, just avoiding a deluge.

Here's the 10 km route, with 350 metres of ascent, which took me nearly 3 hours at a very leisurely pace, including my lunch stop.

On display today were Ragwort, thistles, bright yellow gorse, tormentil and even harebells. Carrion crows outnumbered the jays and magpies, whilst various birds of prey kept a greater distance and blackbirds and grey squirrels scurried in the undergrowth.

I left the old Canon S70 with them for a while and returned to find it repaired sufficiently for the lens to stay out all by itself. "The parts are very worn", I was told. So the repair won't last all that long, but at least the camera is now functioning reasonably normally for a modest outlay of £20.

The shop has masses of 'Real Cameras'. But they offered only a fiver for my old
EOS 300, so I'll hang onto that for the time being. They do seem to be enthusiasts, and may well be able to help for minor repairs, as in the case of my S70.

Jem can be contacted at [email protected]

What to do with all the old cameras???

Nick joined Sue, freshly recovered from jet lag and the excitement of Singapore's F1 circus, and me for our regular stroll around Alderley Edge from the Drum and Monkey.  This walk features on earlier postings from 7 October 2007 and 28 October 2007, since when my entries seem to have become increasingly verbose and picture-laden.

I offer no excuses, I'm afraid, but I'll try not to repeat the content of those early postings.

Here are Nick and Sue at the entrance to the National Trust owned woods of Alderley Edge.

Near the wizard's well, a rock is inscribed:
"Drink of this and take thy fill from the waterfall by the wizard's well"
There was early mist and the first signs of autumn, but still a good tree canopy for numerous tits and scurrying squirrels.

After passing the site of the Armada Beacon and the cliff top mine entrances, we dropped down to the edge of the woods and this mine entrance.

Lots of fungi were on display.  I think this one may be the inedible Common Ink Cap (Coprinus altramentarius).

As the cloud cleared, the sun began to beam down through the mature woodland.

The picture below is more or less the site of a hamlet that was demolished in the 1950s, so the trees here are relatively young.

Jodrell Bank's radio telescope appeared on the horizon across sunlit fields.  Three circling buzzards mewed in the distance.  They are very common hereabouts.

The wild flowers are fading, though herb robert is still flourishing.
Most of the gardens hereabouts, in this area inhabited by millionaire footballers, are well out of sight to casual meanderers like us.  But here's an exception.

We paused to collect some luscious blackberries below ivy clad garden walls that are changing colour.

As are the maple trees.

Other trees are laden with berries.

Here's a Red Admiral.  Just for you, Darren, but not up to your standard, I'm afraid.

Thanks go to Nick for providing footwear, hastily grabbed from Nike on his last day there.  Best wishes, Nick, we hope you enjoy your Shanghai challenge with Columbia - we will of course be happy to carry out any testing you may require in UK conditions - our 'year of constant summer' must end sometime!
Here's the route - it's about 8 km (5 miles) with 290 metres of ascent, and takes 2 to 2½ hours to stroll.