SWCP slideshow
at 23:13 No comments: Links to this post

Click here* for a slideshow of our recent South West Coast Path trip. (It's the first time I've tried this - any feedback would be appreciated - I know most of the photos are already on the previous posting, but hey...)
*The first screen gives you the Picasa thumbnail images; if you then click on 'slideshow' you can adjust the speed by pressing + or - either side of the word 'seconds', and you can hide the captions if you wish. Pressing pauses the slideshow, after which press again to restart, or manually move from slide to slide using the arrows.

The area in which we walked (Plymouth to Torcross) is shown below - apologies for the poor resolution, but it gives you the general idea.... 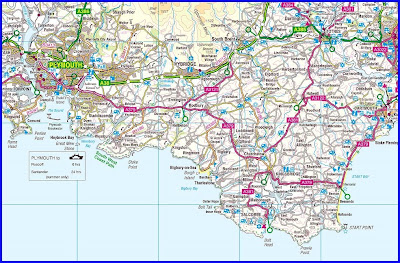 Here are a few images and additional observations and links, to supplement the postings made during this four day trip.

The photos are mainly from Sue's Canon G9, as my old Canon S70 finally died at the end of the first day, despite last week's repair.

Roll on the G10!  Images until then will depend on my borrowing the G9.

Anyone planning to walk on the South West Coast Path (SWCP) would benefit from the SWCP Association's Guide Book. This is updated every year and was £8 well spent even for our 4 days on the route that is divided into nearly 80 sections.

Our stroll started in Plymouth.

We tried unsuccessfully to get into the Mount Batten Tower.

This 30 foot high gun tower guarding the southern approach to Plymouth harbour was built in 1652 across the water from Plymouth Fort (now the Citadel). It was designed to accommodate 10 guns on its roof and was in use during the Second World War with two Quick Firing guns.

We soon had the route ahead in view as we strolled south beside Batten Bay.

After we had ignored a cafe at Bovisand Bay, lunch featured excellent nut cake from Markus Petter's fine food parcel.

On to Warren Point, with boats in the Yealm estuary.  We negotiated that by taxi.

Cellars B&B had a summer house with this lichen encrusted bench.

On the beach below, a £1m package of powder had recently been washed up.  Smuggling and piracy remains a feature of the under life around here!

The rain stopped as we started, but was still clouding our horizon.

The sun was shining by the time we reached St Peter the Poor Fisherman's church at Revelstoke, a rugged mediaeval church of Saxon origin set dramatically on a cliff above Stoke Bay.  It has a monastic air. The aisle and the porch have finely carved wagon roofs of the late Middle Ages, but much of the rest is roofless. Abandoned around 1870 in favour of the new church built at Noss, dilapidation followed until rescue by the Trust a century later with support from a local group of Friends.

From Beacon Hill the route ahead appeared clear.

The sheep encountered on this trip were very clean (freshly washed) and some had even been freshly shorn - reminding us that this is one of the warmest parts of the UK.


Butcher's Cove is full of rocks.

The River Erme presented a formidable barrier.  Thick brown water flowing fast from Dartmoor made the crossing quite interesting!

Much of this coastal corridor along which the finely constructed and maintained SWCP runs is now owned by The National Trust.


Happily we survived, and today's destination, Bigbury-on-Sea, is visible in the distance beyond Andrew.  The iconic Burgh Island Hotel, was unfortunately out of our price range.

We were soon on our way past the Sloop Inn and the lovely row of thatched houses beyond it.

We turned sharply south after passing this boathouse.

This arched rock was prominent for some considerable time before we reached the haven of Hope Cove.

Today ships were silhouetted on the steely blue water and the Eddystone Lighthouse loomed large on the horizon, about 18 miles away, with views extending to the coastline around Mevagissey - around 35 miles away in Cornwall.  A 30 mile kayaking event to the lighthouse and back was being advertised.  A tough challenge!

The view ahead shows the excellent path towards Bolt Head, beyond which the haven of Salcombe beckoned.

The superb path Sue and I followed to Prawle Point was totally deserted.

The coastwatch station at the Point was being assiduously manned by volunteers.


We were relieved that we didn't meet the giant ants that built these!

Here's the rough way ahead to Sleaden Rocks, on the way to Start Point.

This adder was only about 6 inches long.

On a stormy night in January 1917 the fishing village of Hallsands collapsed into the sea. Today only these ruins remain. Natural disaster or political conspiracy?  Find out more here.


One of the commonest and most colourful of the many flowers seen on this trip was Common Toadflax.

Our journey, for the time being, ended in Torcross, just beyond this strangely named hostelry, where WG Grace appears to be slogging into the sea.

Considering the time of year, the wildlife was abundant, with Martins and Swifts gathering for migration, little egrets in the Erme estuary, Red Admiral butterflies, stonechats and wheatears beside the paths, and oyster catchers and many gulls, cormorants and shags on the beaches and coastal rocks.
We noted about 30 bird species and 40 common flowers during our wanderings. 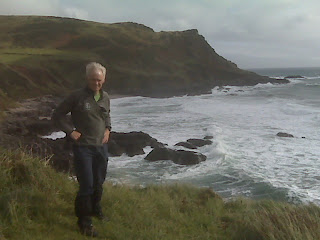 The rain lashed down all night and rapped against the windows as we tucked in to our full English breakfasts.

We took turns at guessing when the rain would stop:

"8.50" I hazarded, that being the estimated time of departure.

"10.53" said Andrew. He was planning on walking to Kingsbridge, only 8 km away, and I assume he planned to drink coffee and read the papers in the Salcombe Coffee House until 10.53.

Sue found the question too hard!

Anyway, we set off at 8.50, and the wettest we got all day was from the salty spray slapping our faces on the ferry to East Portlemouth - the sea was rough and the ferry is a rowing boat with a small motor.

The path led through lovely sheltered woods before dumping us above the huge swell and the waves that were crashing into the coast line all the way to Prawle Point.

Even at a height of 40 metres the foamy spray was blowing past our faces.

It was a lovely bracing walk on deserted paths to Start Point. Beyond here we saw just a few people, and the sea was much calmer to the north of the Point.

There had been no mobile signal until we turned north towards Torcross, then Andrew reappeared on our radar. He'd had an eventful journey to Kingsbridge, including incidents with a farmer, a large and bouncy herd of cows, and some rather sharp barbed wire. However, he'd managed to recover the car and get to Torcross. So Sue and I continued happily onwards on a lovely afternoon, past the ruins of Hallsands village, swept into the sea by a storm in 1917, before a jolly rendezvous and the long journey home.

The above photo was taken before lunch, looking towards Start Point.

I'll add some more images from the trip in the next posting. 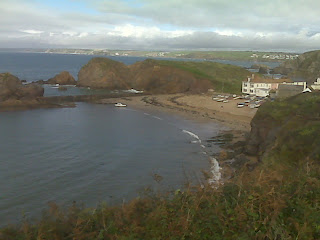 A wholesome breakfast in front of a warm Aga set us up for another windy but dry day.

Muddy farm tracks led to Bantham village, with its Sloop Inn and row of thatched fishermen's cottages, plus a picturesque boathouse just beyond.

Already surfers were plying the waves in the bay.

Luckily there were no stray balls from Thurlestone golf course, but we were nearly knocked flying by a three-legged bearded collie. Its owner was more courteous and recommended tonight's restaurant!

After a blustery walk along Cathole Cliff, the relative shelter of Soar Mill Cove made for a suitable lunch spot, midway between the geographical extremities of Bolt Tail and Bolt Head.

More high cliffs preceded a turn north towards Salcombe, where ancient woodland coloured by blue hydrangeas provided shelter from the wind. Apparently this is a frost free zone, with one of the warmest climates in the UK.

Some hilly road walking brought us into the village, where the local surf shop was closed, displaying a handwritten note - 'Gone surfing'. Luckily the tea shop staff had not gone surfing and served delicious scones with rich Devonshire clotted cream.

A steep climb to our B&B, Rocarno, was rewarded with more tea provided by our genial hosts, Anne and Roger.

We were expected at the highly recommended Boatswain's Brasserie, having bumped into the owner earlier in the village. The food was excellent - a fishy evening involving (between us) crab, squid, scallops, brill and monkfish. A jolly place with banter between the tables and the staff, and fine food washed down with Pinot Grigio. 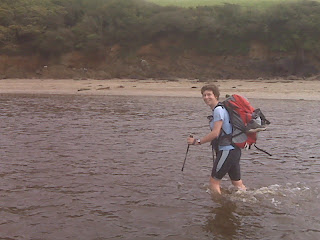 Rain lashed down all night. It was still raging as we dashed through the garden to the main house for breakfast. An excellent, leisurely affair.

Fully clad in the latest waterproof gear, we stepped bravely out onto the SWCP.

The rain stopped. The barometer and the thermometer raced each other up the scales. Our morning stroll started along a fine old carriage track fit for a king. "King George" we were told.

On to lunch beside the River Erme.

Nobody was on hand to provide guidance by crossing before us.

So it was on with the Crocs for Andrew, and bare feet for me and Sue. We chose the widest spot and had luckily timed our crossing to coincide with low tide. Deep Brown Water from last night's deluge over Dartmoor soon engulfed us. It was Fast Flowing. Thigh High. Walking poles were deployed. Short Steps....

But we made it!

On we tramped in lovely sunshine. A white-haired man with a gaudy rucksack appeared at Westcombe Beach. Colin, with unfamiliar gear that has skipped a century!

"The old stuff still works fine" he insisted, having perhaps donated it to a museum.

On to Bigbury-on-Sea. The hotel at Burgh Island is too pricey for us, and we've missed the ferry. But Vida, from Aune Cross Lodge in Bantham, is on hand to zoom us around to her excellent B&B, from where it's a short lurch in front of a lovely sunset to the Sloop Inn for another dose of Dartmoor Ale and a substantial nosh.