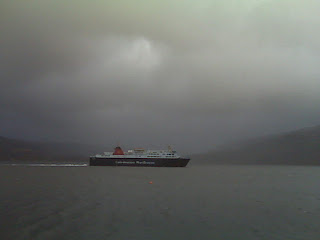 On the road again, for 10 hours, but well worth it. We are at a favourite spot. It's called Tigh na Mara. Occasional showers and spectacular rainbows accompanied us today, with sun specs being needed for most of the time.

We chased Andrew, Rosemary and Lucy, who are installed nearby, and Ken and Anne, whose luxurious quarters are called Hallival. Our own 'house mates' will arrive tomorrow.

Ken and Anne cooked us a lovely meal, then R+A arrived to polish off the wine. They needed something after appearing in a very bedraggled state due to slightly inclement meteorological conditions.

Today's postcard was taken on arrival here, from the same place as the header that adorns this blog. Today's conditions on Loch Broom were somewhat different less photogenic!

Sent using BlackBerry® from Orange
at 23:00 4 comments: Links to this post 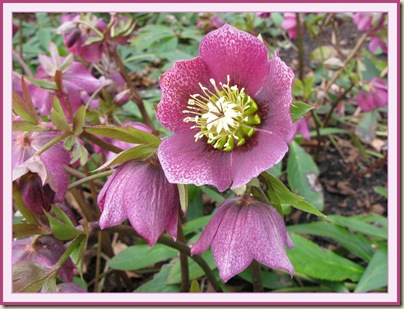 We have become frequent visitors to the new Winter Garden at Dunham Massey.

Now it’s spring, lots of stuff is ‘springing’ to life.  Apart from what the harsh winter and temperatures of –15C to –20C has killed off, that is.  This winter was a bit of a surprise to the gardeners, given the Mediterranean nature of recent such seasons.

The above picture was taken by Sue on Tuesday.  The garden really was most colourful, with swathes of daffodils as well as some more unusual varieties.

We’ll be back there soon, but first we head north.  So it’ll be a return to ‘mobile blogging’ for the next week or so. 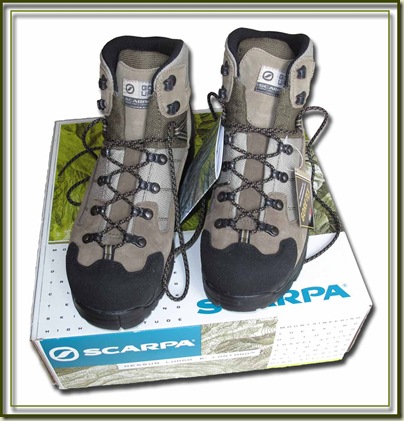 My old Asolo Fugitives* having seen better days, I took a trip on Wednesday to the Alpenstock emporium in .  Their boot selection isn’t as extensive as that at Outside in Hathersage, my usual source of footwear, but the Infinity seemed to fit, so I bought the pair and saved myself a wet drive to Hathersage.  They are very similar to the Fugitives, and at 1475 gm (size 43) are virtually the same weight.  Thanks to Hugh and Jose at Alpenstock for their patience during my lengthy visit.

The boot quest had become a little urgent, as I could do with these boots for some upcoming trips.  Whether I can break them in in time remains to be seen, but tonight (Thursday) they got their first outing – a 6 km jaunt around Alderley Edge with Andrew.  We were the only ones daft enough to turn out for this scheduled evening walk.  It was dry and comfy in the Drum and Monkey; not so outside.  The boots were ‘well muddied’ so there’s no chance of them going back.  They were ‘reasonably’ comfy, and should be ok so long as the ankles don’t rub my tendons, a problem that I’ve encountered in the past (but not with the Asolos).  So a few short walks with these new boots will be needed to break them in.  This is a slight problem, as some longer walks are on the cards for next week; it looks as if I’ll be carrying a spare pair in the bag!

The walk started just as the overhead tap was turned on, but the rain did ease from time to time, with the moon even coming out for a while.  Despite the rain and the canopy of trees, the ambient light (Andrew theorised that it all emanated from the local footballers’ security systems) meant there was no need for torches.  This didn’t prevent my esteemed companion from taking a bum slide down a boggy path, causing him to reject any idea of re-entering the pub after the walk; and my muddied new boots – the only footwear I had – probably wouldn’t have been appreciated either. So it was home to an early bath!

Hopefully our forthcoming evening jaunts will be better attended.  All are welcome, of course.

Scarpa Infinity report as at March 2014:

A second pair of boots was soon acquired as Alpenstock offered a very good deal on them (£99). They were comfortable from the start and hardly needed any breaking in.

The first pair is still keeping the water out and has covered over 2,400 km (1,500 miles), including two TGO Challenges, the Dales High Way, a trip to Turkey, backpacking in the Maritime Alps, and a week along Markus Petter’s Caledonian Trail route. They have been superb.

The second pair was used, as was the first, for numerous day walks, and for one TGO Challenge and a couple of weeks in the . Their biggest trip was 2013’s 950 km GR10 trek, at the end of which they were showing serious signs of wear. So, knowing that the other pair was in better condition, I abandoned this fine pair of boots after just 2,200 km, on the outskirts of Banyuls-sur-Mer.

Excellent boots. I hope that the Mustangs that succeed them will be as good.

*The Fugitives bought in October 2008 have now (March 2010) done about 1000 km and are in good condition but leaked after only a few (albeit very wet) km.  The ones bought in 2007 leaked after less than 500 km, and are now starting to disintegrate after over 2000 km of use.  Both pairs have been extremely comfortable. 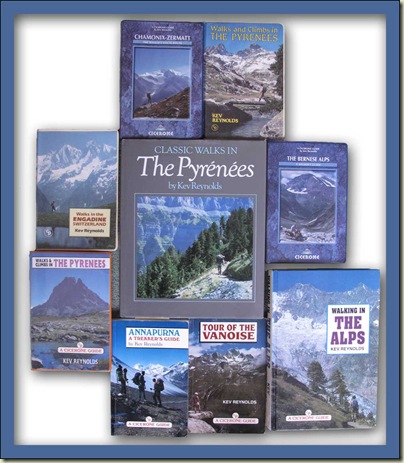 Sue and I escaped to the Alps for an hour and a half last night, courtesy of Stockport Walking & Outdoor Group, who had booked Kev Reynolds for the evening.

Kev’s lecture, one of many in his repertoire, was excellent, transporting his seventy strong audience to the playgrounds of the Alps that Sue and I so much enjoy visiting (that may be obvious from sight of the little bundle of books I pulled off our shelves for today’s postcard).

“Over a period of more than 30 years Kev Reynolds has walked and climbed in many different parts of the Alps; has lived and worked there, written more than a dozen guidebooks to specific regions, as well as Walking in the Alps - a comprehensive guide to the whole alpine range, from the Alpes Maritime to the Julians of former Yugoslavia. In this talk some of Europe's most dramatic scenery, plus its flowers, animals and villages will be displayed.”

It’s good to know that such enthusiasts as Kev are willing to travel long distances to talk about the things they love, for modest fees within the budget of smalls clubs like this Stockport one.  The landlord of ‘The Grapes’ looked quite pleased as well, with such a huge influx of unexpected customers after the talk had finished.

If you run a small walking group, you could do worse than book this inveterate climber, walker and guide book writer to inject a dose of infective enthusiasm into a cold winter’s evening.

Saturday 20 and Sunday 21 March 2010 – RentaHostel at Fellside, near Caldbeck 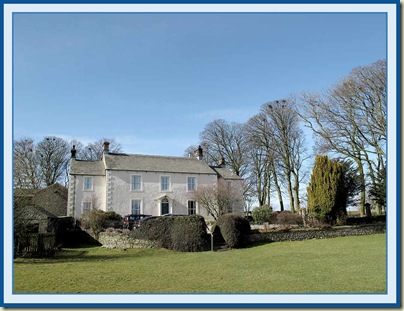 This was home to the 26 attendees of this weekend – the YHA’s Fellside Centre, near Caldbeck.  A ‘virtual tour’ of this Georgian shooting lodge is here.

As is customary on weekends organised by Sue W, we woke on Saturday morning to rain, so whilst one group chose to head into the cloud that cloaked the fells to the north of Skiddaw, eleven of us set off on a 21 km circuit contrived by Notchy to pass by a number of hostelries.

It was ‘dreich’ as we observed various becklets heading down the slopes to give Caldbeck a good wash. 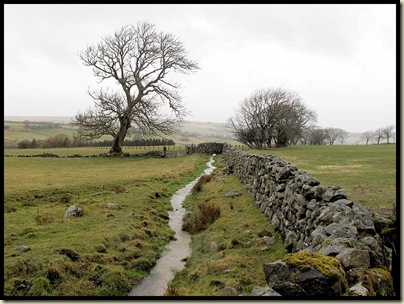 Farm tracks, bridleways, and this flooded road led us on the anticlockwise circuit towards the fleshpot of Hesket Newmarket. 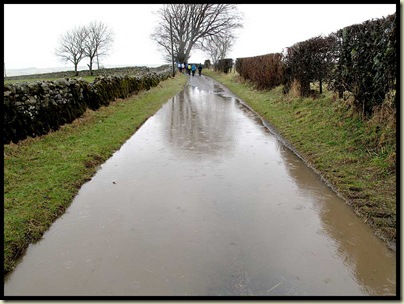 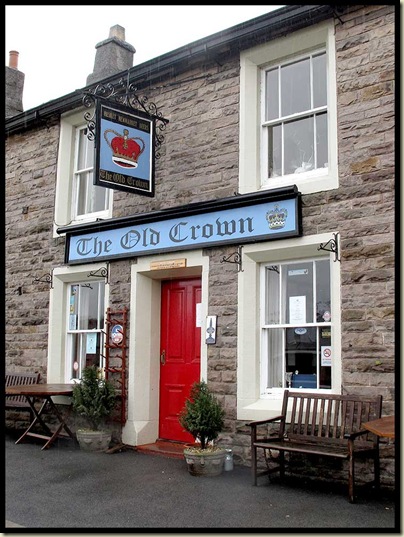 The Old Crown pronounced itself ‘open’, but not for us, as we trailed past in the wake of our over-enthusiastic leader.  This was all too much for Sue and Martin S, who elected to amble back along the riverside via Caldbeck. 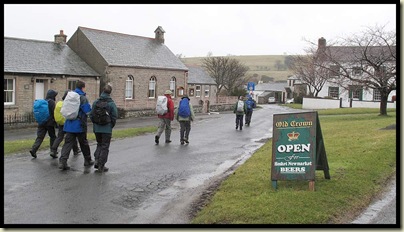 Notchy led the remaining nine of us past boxing hares into this quagmire at Hall Field, before taking us alongside a quarry, beside which dire warnings encouraged us to keep to the path. 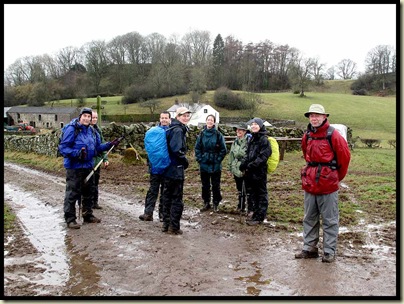 As we approached another haven from the rain, coal tits twittered in the hedge, and a small tsunami just missed us as a vehicle tore past on the flooded road. 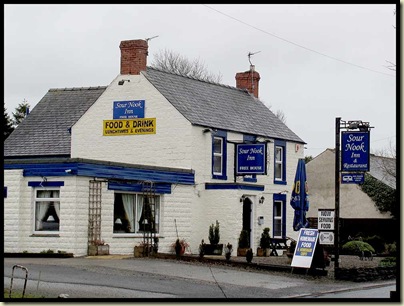 The Sour Nook Inn didn’t suit Notchy, who dragged us on to a church yard in Sebergham, where he could hold court without fear of repercussions, though Ken and Anne rebelled. 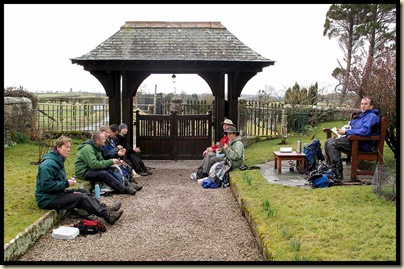 The gentle route of the Cumbria Way drew us through a pleasant wooded valley beside Cald Beck, in improving weather, leading to yet another hostelry. 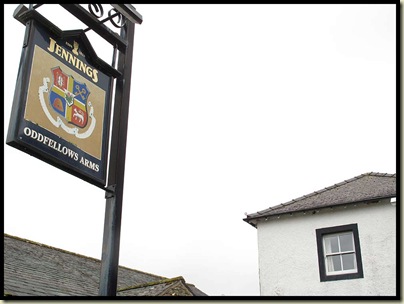 “We went there last night”, asserted the Boss, who led us instead into The Old Smithy, for pots of tea and coffee for 92p each.  It turned out that various members of our party occupied this place continuously for over four hours in a sort of relay! 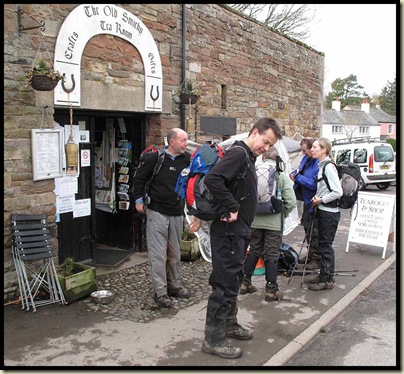 With tea sloshing around his interior, and his predilection to cramping up on the top of ladder stiles, Notchy took to the easy roads for his return to Fellside.  He retained just two disciples, letting the remaining six off the leash.  We strode purposely towards the heights of High Pike, steaming in the afternoon sun. 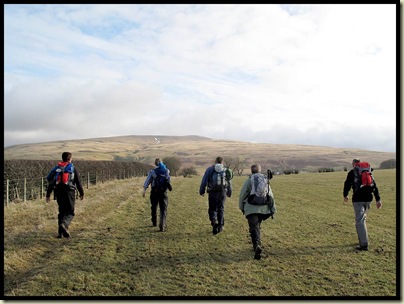 Leaving that particular summit for the morrow, we soon turned west towards our destination, pausing frequently to look back across the pleasantly sunlit landscape. 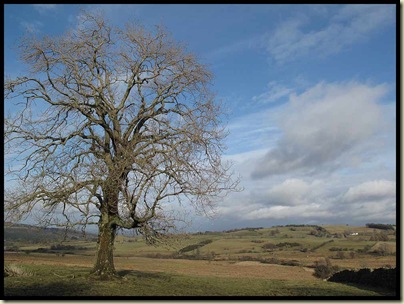 This was a gentle 21km, 6.5 hour stroll, including numerous halts and less than 500 metres ascent, along the thin blue line shown below. 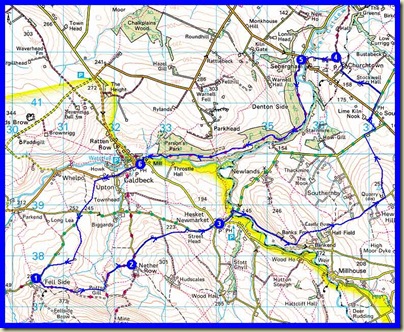 Sunday dawned clear and sunny.  Whilst others embarked on a longer traverse of the peaks at the back of Skiddaw, six of us chose a short morning stroll up High Pike, which at 658 metres towers high above Fellside.

Various groups of children were embarking on their D of E Award training.  Jenny was keen to follow them as (she said) our leader, pictured in the distance below, seemed unable to haul his vast bulk up the gentle slope extreme incline at anything like a reasonable pace.  Anyway, as it turned out, the children couldn’t keep up with either Notchy’s blistering speed, or our supersonic pace.

It was quite cool and breezy, so elevenses were taken in the lee of the summit.  We probably needed to stop anyway, to draw breath and for Notchy to attend to his blisters. 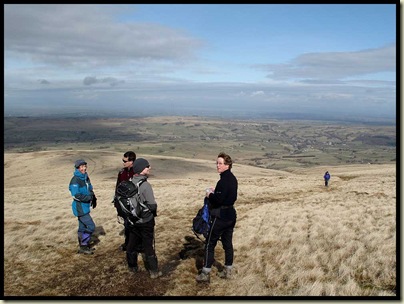 A sign at the summit tried to tell us that London was visible, over 200 miles away, but all we could see was Carrock Fell, with the Peak District beyond that blocking any chance of seeing London in today’s atmospheric conditions. 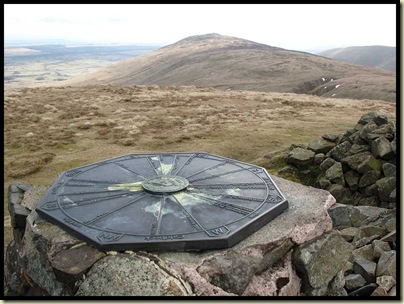 Richard and Jenny tried their x-ray specs, but they couldn’t even see Carrock Fell.  We look happy enough, though… 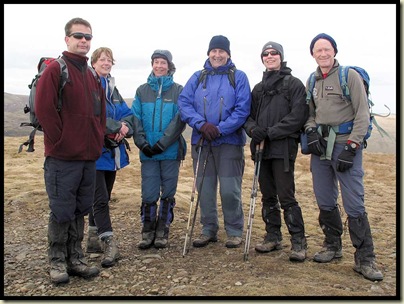 We descended by a similar route under hungry buzzards, observing groups of milling children, lolloping lurchers and sunny vistas. 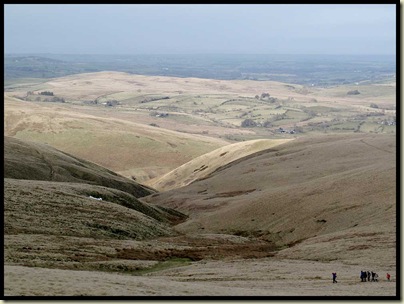 And finally to Fellside, where, locked out after our sojourn had ended on Sunday morning, we enjoyed a picnic lunch on the….picnic bench. 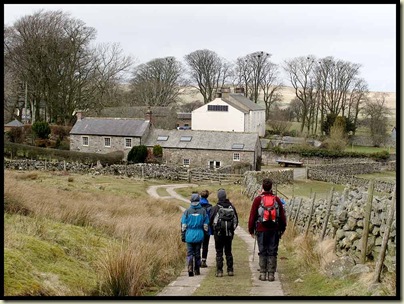 Here’s our 7km route, taking just over 2 hours and involving an energy sapping 385 metres of ascent according to Mr Anquet. 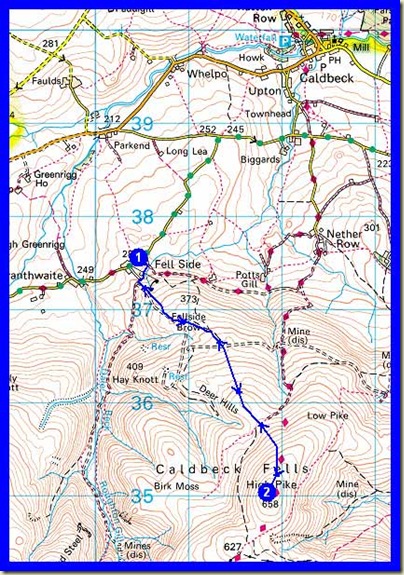 As in some previous years (latterly in 2007) Sue and I catered for this weekend, the Saturday evening menu for which, for record purposes, is shown below.  I’ll upload any recipes that anyone may like to have – in fact I may upload them anyway when I have the time.  The links will be indicated by the usual underlining.

Main Courses
Salmon and fennel fish pie, or
Lentil and tomato moussaka (V), or
Venison and beef with port and apricots*, or
Coq au vin*
accompanied by Great British Mash* and Petit Pois

Coffee and After Eight Mints

All washed down with Cape Chardonnay and Cape Shiraz Cabernet Sauvignon

Thank you to all who helped with kitchen duties, and especially to Ken, who cooked the breakfasts.  As usual, one of the hardest jobs was that of returning various implements and containers to their places in our own kitchen, and so far all that seems to have gone missing is our large Teflon cooking mat.  A mystery, as we searched Fellside for it.  Ah well!
Also for the record, the luxury ingredients for two breakfasts and Saturday dinner worked out at £18 a head for the 26 strong group.