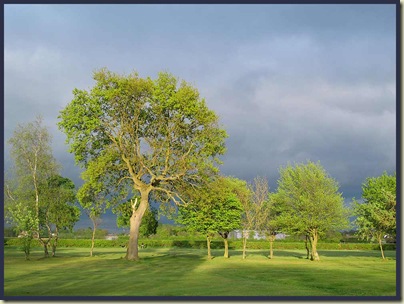 Thursday evening saw Sue and I setting out from Altrincham station at 7.30pm on another evening walk, without Andrew on this occasion as he has absconded to Lochinver.

Turning right down Stamford New Road, we soon reached the footbridge by Barrington’s Hotel.  Over here, then down Oakfield Street, beyond which a ginnel leads into a large area of municipal parkland, including the sizeable King George V pond.

It’s pleasing to be able to walk straight into open countryside from the centre of a town, but we were soon having to concentrate hard to dodge the golf balls as we crossed an assortment of fairways, heading roughly south east along paths to the south of Timperley Brook.

This is Hale Moss and Heath, now a golf course and cultivated farm land dotted with ponds, spinneys and drainage ditches.  It was much larger until the late C19, when gorse and turf were cut by locals for use as fuels, and part of it was used as a race course.  One of the country’s earliest gasworks was built here in 1847, but only in the early C20 was the Moss and Heath largely drained and reclaimed, as the swampy stagnant pools had become a risk to both humans and grazing animals.

Paths led us past the north end of a garden centre and then on through Cheshire countryside to Davenport Green, where we joined Brooks Drive by an impressive mansion - ‘DGH’ – Davenport Green Hall – the oldest surviving secular building in the area.  It may occupy part of the site of the ‘lost’ village of Arleton, mentioned in the Domesday Book but abandoned at or soon after the time of the Black Death (1348).

Heading south towards Hale Barns, past exclusive residencies that remind me of a street of embassies in a place like Cairo, we reached the main Hale road and crossed it to bimble our way through the ginnels of Hale Barns, slowly wending our way towards the Bollin valley.

Our original plan was to go down to the Bollin before cutting back up to Hale, but given the fading light we enjoyed a more direct route via suburban streets and narrow ginnels, reaching the fleshpots of Hale village, where, on the evening of the election, various parties were in progress.  Judging by the array of vehicles parked in the streets, many costing more than the average house, these were not ‘election’ parties, perhaps more a sign of the end of the football season.  This is premier division footballers’ country.

Such local walks have much to commend them.  It’s good to explore local paths, albeit they sometimes do present an urban aspect. 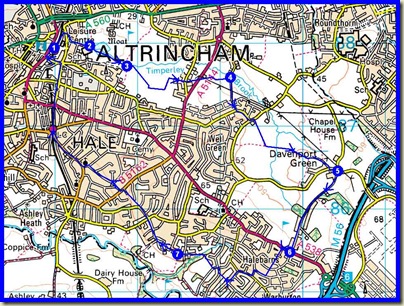 It’s all a bit quiet here, just now.  My new role as a decorator leaves little time to get out and about, so readers can take a deep breath and wait for the TGO Challenge to start on Friday 14 May.

Meanwhile, the Winter Garden at Dunham Massey is currently a riot of colour.  Do get down there if you have a chance. 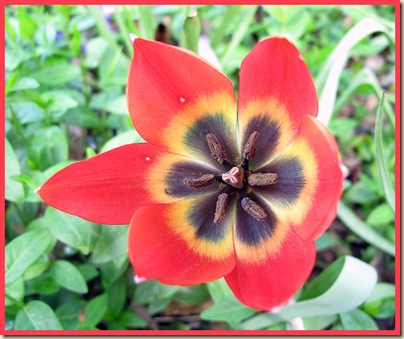 And here’s an early evening snap taken today in Lymm, where everything is greening up nicely, subject to some delicate splashes of orange. 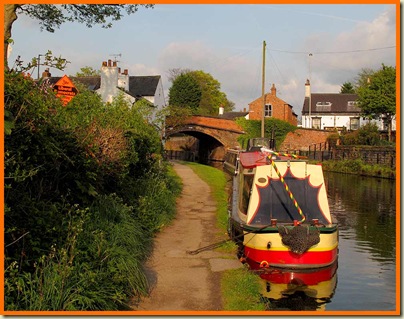