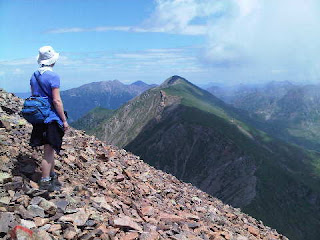 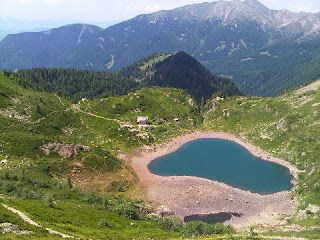 A fierce debate raged on into the night. At first Hotel Ideal's manager, Fernando, asserted that it was just a 40 minute walk up to Vetriolo! With 15kg and an ascent of 1000 metres? I questioned his reckoning. We showed him our day's route. "That's quite long" he agreed, and explained how we could get a bus to Palu, beyond the end of our planned day. "That's not the point" we asserted, and eventually compromised by booking a taxi up to Chalet Panarotta, a little beyond Vetriolo, and slightly off the E5 route, but a comfortable 1250 metres above Levico, bringing our ascent for the day to a more acceptable 1000 or so metres.

The day was warm and sunny, with any sign of a storm on a distant horizon. Still quite hazy in the heat, but we weren't complaining.

The taxi duly arrived at 9.45 and took us fairly smoothly (it only broke down once) up to Chalet Panarotta at 1770 metres. So we completed this 1250 metre ascent part of the journey in a taxi for €35.

It was worth every cent, as it positioned us ideally for the day's high level walk over two alpine summits, Cima Fravort (2347m) and Monte Gronlait (2383m).

Being Sunday there were lots of people about today in this popular area where summits can be reached without difficulty. The terrain was quite like a version on a grander scale of that in the English Lake District, but the views down the valleys were another matter - they stretched to distant towns a good 2000 metres below us.

There's still a considerable haze, so distant views were just a little difficult to bring into focus, but fine views from both summits (the one from near Cima Fravort is pictured) drew our eyes back to the route we had travelled so far, and on towards the higher Dolomite massifs, with Bolzano hiding somewhere to the north.

We spent several hours traversing mountain ridges, culminating in an interesting section between Passo Portella and Passo del Lago where care was needed and a few wires and boards had been strategically placed to aid our passage.

After this* it was a simple descent to join the Sunday crowds at Lago Erdemolo (pictured from above), where the rifugio sadly remains closed. It would have done a roaring trade today; perhaps its former 'cantankerous' owners were better than none at all! The path was quite crowded, with people returning home from their sunny weekends, to the extent that one little boy grabbed Sue's hand, thinking she was his mum. "So you have an Inglese mother" his siblings later teased him.

Down at Frotten, the best part of an hour's walk from Erdemolo, the nice people at Agritur Scalzerhof were anything but cantankerous. But they did have a problem when we arrived at 4.30. A coach load of walkers had just descended on them, the 'boss' of which group - a short, officious gentleman wearing a t-shirt from Nepal - was very concerned as to their welfare. So we waited patiently for 30 minutes for our beer and tea. Andrea, whose family run this excellent place, was very apologetic, and we were very understanding.

We've enjoyed an excellent dinner, featuring a local speciality, cuccalar, a chapatti like bread made from special flours that is served as an antipasta together with a selection of meats and cheeses. It seemed more like a main course than a 'pre-starter'!

It's a lovely clear evening: the storms are currently elsewhere.

Anonymous - as the bike was parked outside Gino's house, we assume it is his. We didn't see him again after receiving your comment. He is very sprightly for an 86 year old and uses a push bike for local trips. The 'Benetti Mystery' continues!

Alan R - transport here is much as in the UK actually, probably a bit easier. I should have checked the bus times in advance, but it was clear from the timetable at the bus stops that the bus to Vetriolo only runs on weekdays. Did you take a day trip to Florida?

Data:
8 July 2012
30 mins in taxi to Chalet Panarotta, then 17km in 6 hours with 1000m ascent
Other E5 walkers - none in evidence
Flower of the Day - Spotted Gentian (we are moving into 'Gentian country')

* There's an option here to carry on along an 'E5 Alp' route over various further summits to Rif Sette Selle, rejoining the main route the following day at Regnana. It's clearly marked on the Kompass 121 strip map. It looks excellent. I'm slightly annoyed at not spotting it at the planning stage, not that there's anything wrong with our standard route.

It might well have been Florida Martin. We had a hot and humid weekend here. Sadly it’s back to raining again now.

I have been following your blog and sounds like you are having a great time ! You are lucky to be out of the UK -weather here is wet and miserable !
Enjoy - loved the look of the alpine concert,continue to devour all that delicious Italian food and keep us armchair hikers drooling with your adventures and pics !!