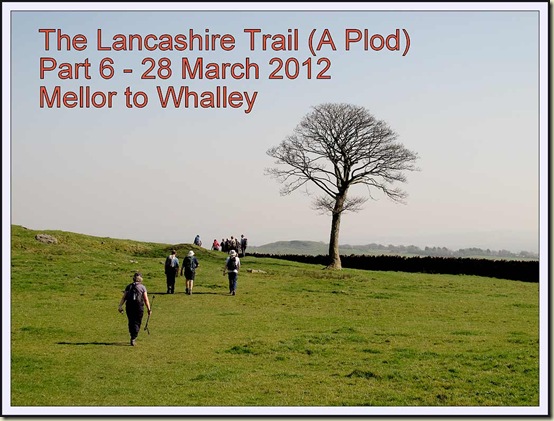 On a lovely sunny March morning some 16 Plodders and Maude congregated at Springwood Picnic Area in Whalley, before transferring to Mellor and setting off from the point at which we arrived in the rain on 22 February. 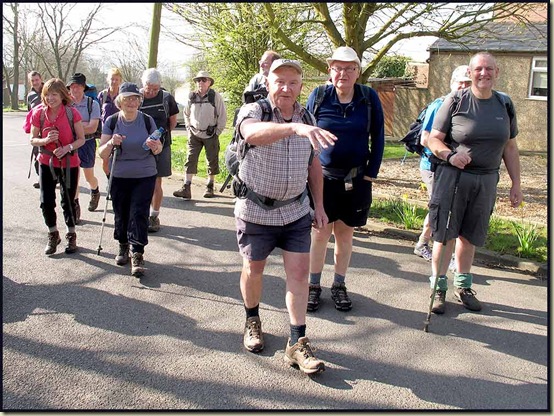 We soon reached an orientation point at 223 metres on Mellor Moor, the site of an Underground Nuclear Monitoring Post, now sealed.

Pendle Hill lurked almost unseen on the horizon, through the March heat haze, as we passed by Midge Hall and the course of an obscure Roman Road, before reaching the site of Norman’s latest addition to his property empire, foolishly purchased on the basis of an agent's particulars. 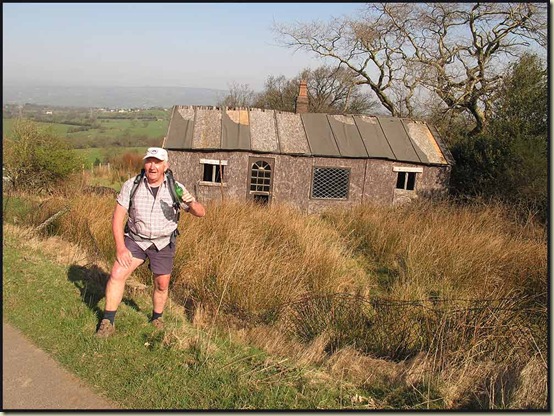 Norman toasted his success and proudly offered the property as a base for club weekends.

A capped reservoir was passed, so well fortified and equipped with security cameras, that we decided it must be a fuel store rather than a ‘water store’.

A very pleasant descent led to the village of Wilpshire, from where a hot rise to the golf course had everyone gasping, and annoyed some golfers who had to wait for all sixteen of us to cross through their line of fire.  Grumpy old men, they should have appreciated the break, on such a hot day.

It was time for lunch, taken from a hollow in the grass (Roger), or a comfy bench (Reg), and much in between.

From there, good turf led towards Snodworth, and the approach to Dean Clough Reservoir. 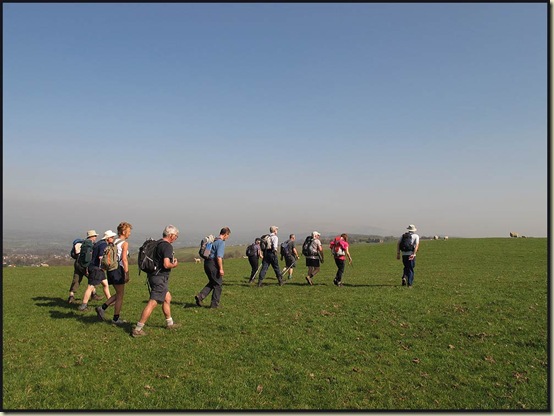 Reg skilfully guided everyone past the reservoir and through a dense forest of gorse, before lingering at the rear with Norman as a sort of test to see what would happen next. 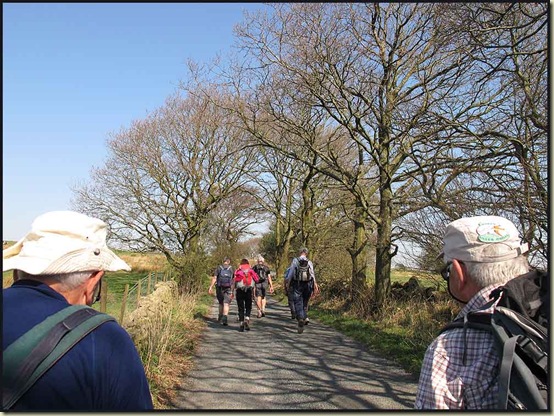 It's best to stay behind Reg and Norman - they usually know the route.

Luckily for the rest of the group, as soon as a decision had to be made, Roger collapsed like a Granny’s jelly, preventing the need for any guesswork before our esteemed leader arrived on the scene.  Reg (‘The Butcher’) started to salivate at the sight of Roger’s collapse, but the victim suddenly revived at the sight of the scalpel.

The foothills of Pendle Hill loomed ahead – perhaps that had caused some to falter, but after reassurance that we would not be going much further today, everyone ambled gently down to the pleasant village of Whalley, and the River Calder.

There’s a fine viaduct here, but we by-passed the village by taking a ginnel to a riverside path. 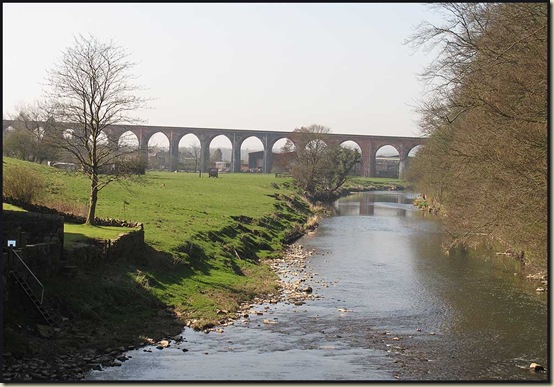 Norman performed some of his usual antics in the weir, as illustrated in Episode 2 of this report (which being more timely may be more accurate than this poorly recalled Episode 1). 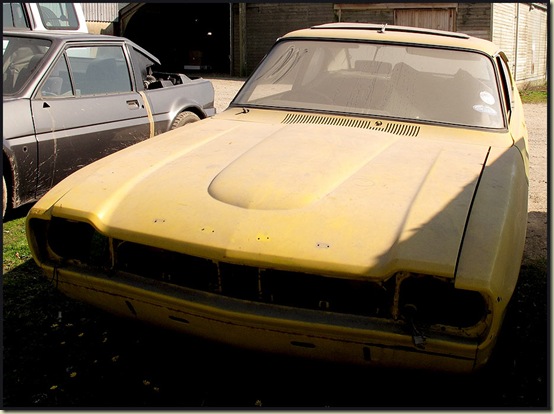 Having made it back to Springwood picnic area, just beyond Whalley, we then returned to Mellor to pick up transport and enjoy a beer and a planning session. 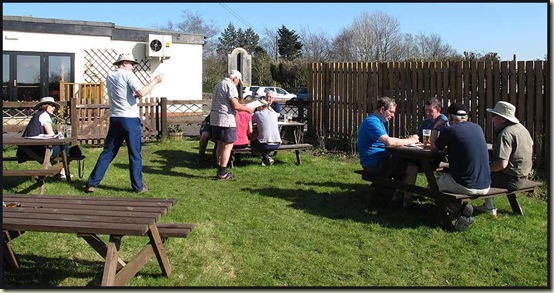 Thanks as always go to Reg for organising the 'Plod', and to Norman for his excellent 'clown' impersonations. 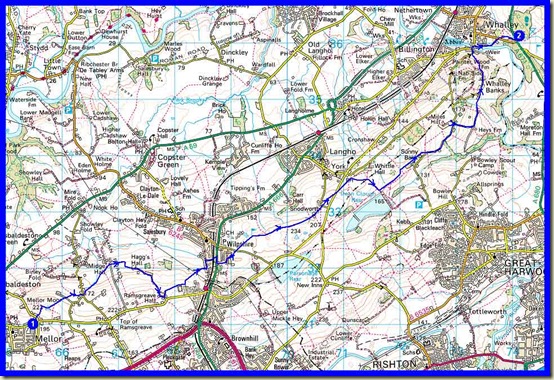 Reg’s (more accurate as always) report is on this page, and I’ve uploaded a few more images here.

Back to Lancashire Trail Index 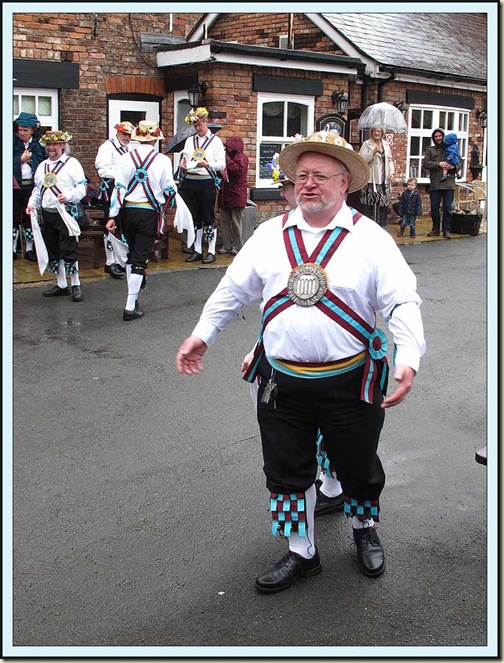 “Where can we go to show my parents some local culture?” asked Sue’s Italian teacher.

“I don’t know”, replied Sue, “I shall have to seek advice from my ‘Culture Secretary’”.

And so it was that I found myself ambling along the Bridgewater Canal on a wet Easter Monday in search of ‘culture’, as recommended by Sue’s unlikely choice of personnel, her ‘Culture Secretary’.

Passing through Broadheath, I noticed with sadness that ‘Malbo Joe’ hadn’t quite made it to the party in Timperley. 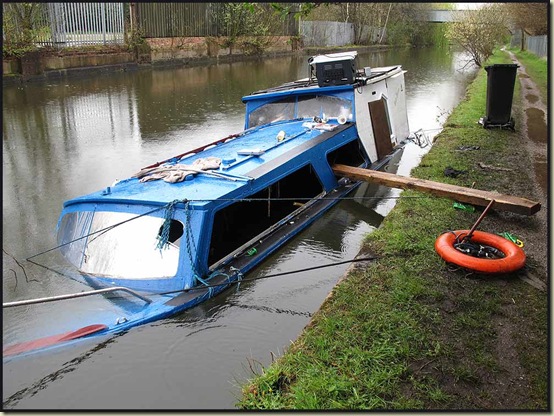 “Is the party in Timperley still raving on?” asked the lady with the dog on a boat.  “No, you need to turn around” I replied “a ‘Culture Secretary’ says it has moved to ‘The Swan’.”

By and by I reached the Swan, just late enough for Sue (who chose a more sensible mode of transport) to have done the honours at the bar, in the company of a jolly band of Thelwall Morris Dancers.  Sadly, neither Sue’s Italian teacher and her family nor Sue’s ‘Culture Secretary’ had been able to make it, so the audience for the Morris Men was, shall we say, ‘limited’. 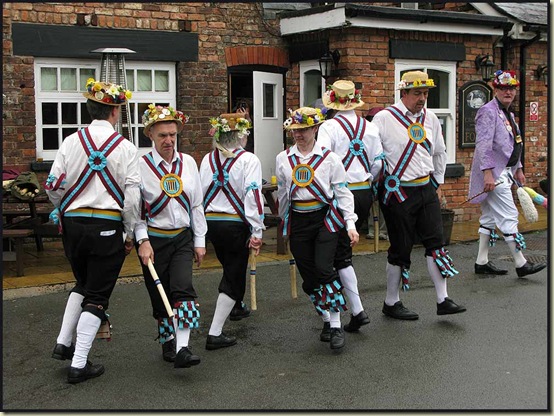 “We blame you for making us do this” spluttered the drenched dancers after Sue had told them she had come specially to see them.  Despite encouragement from the jolly chap at the top of this posting, the diners in the pub couldn’t be persuaded away from their beef dripping and chips.

JJ had put on an ingenious face mask and stilts today, but there was no doubting that this was he, scouting for Italian tourists whilst modeling his new TGO Challenge hat. 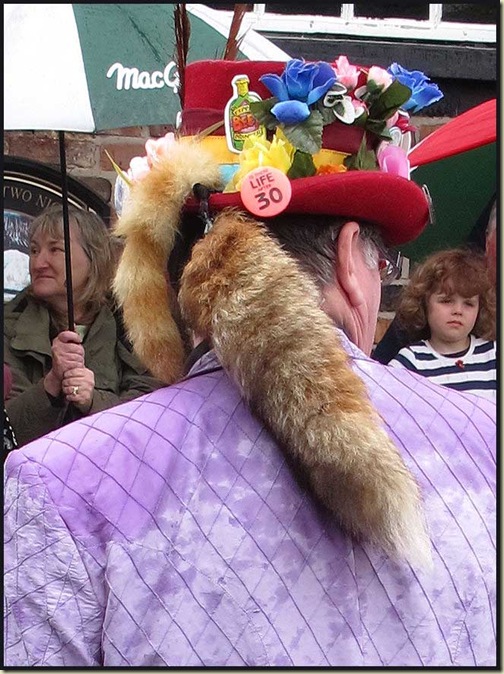 The dancing continued.  The dancers got soggier. 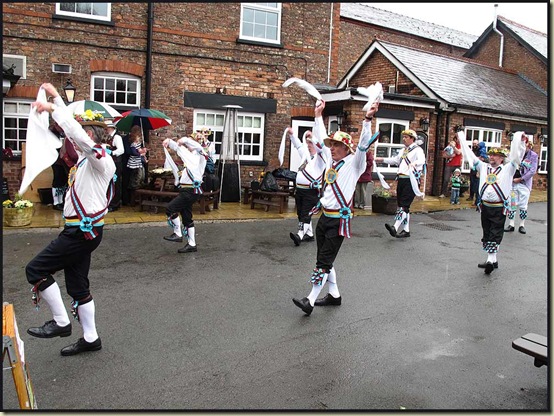 There were glum looks from below the masks as beer glasses were slowly diluted by the persistent rain. 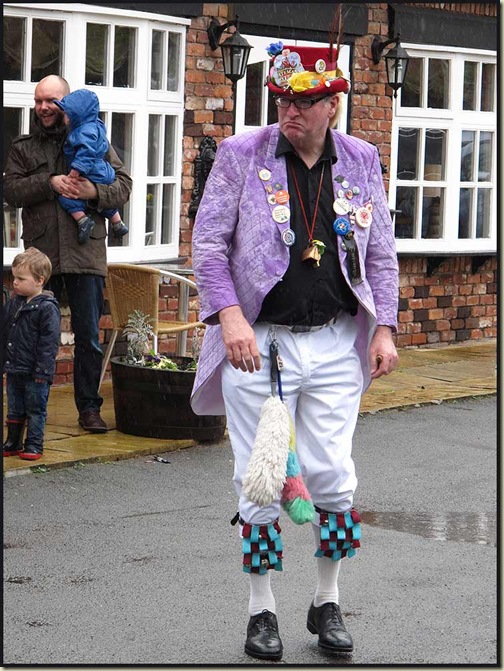 Sue took a video that will no doubt zoom up YouTube’s chart lists.  Or not.

After the third dance the men cleverly diverted their efforts to the bar, where in the absence of JJ her ‘Culture Secretary’ Sue thanked them for their efforts.

It was still raining, the Swan’s picnic tables were deserted. 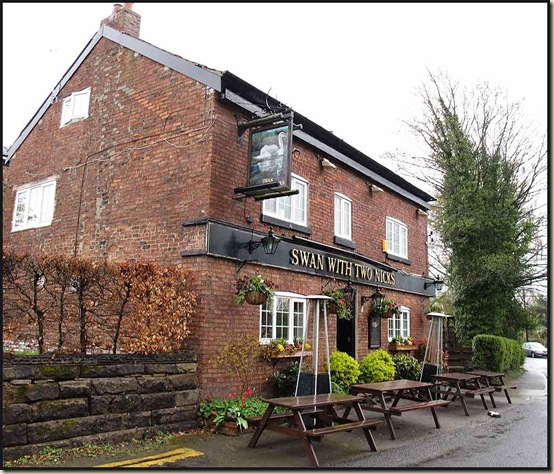 Whilst Sue zoomed off on ‘Essential Business’ I tottered back down the slithery towpath, where at least the Forget-me-nots were enjoying the rain. 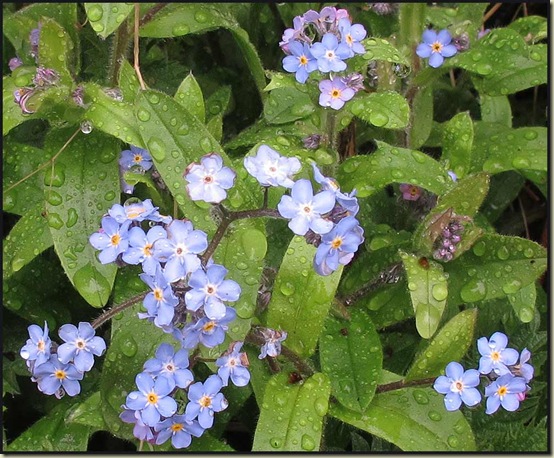 There was hardly anyone else about on this normally very popular stretch of towpath, just three very muddy ‘mountain’ (sic) bikers and a puzzled looking drenched family that looked as if it has been deposited by an alien spaceship.

I’ve not yet seen any swallows or martins, and it’ll be weeks before the swifts return to share our home for a while, but the mallards have been busy…

“Hello” quacked mum “I’ve heard there’s a party at Malbo Joe’s – is it far away?” 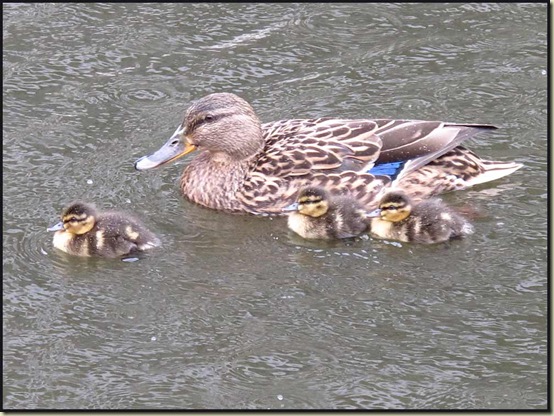 “Not far at all” I whistled, casting my eye a few metres down the canal in the direction of Broadheath. 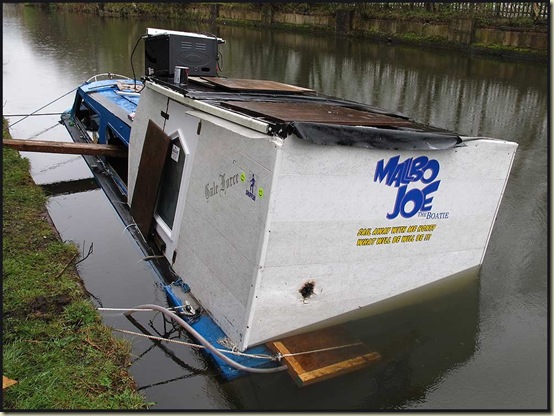 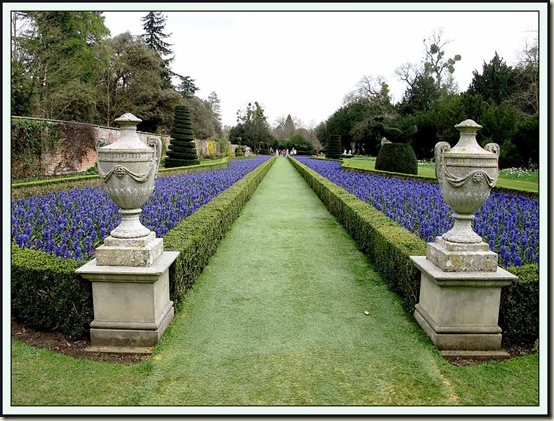 It takes us less than a day to return home from Ottawa.  Why then should it take two and a half days to return from Kent?

After some last photos of Water’s Edge and a long chat with Gemma and Ed about the ups and downs of renting out a cottage in your own garden, we reluctantly departed the lovely cottage that had been our home for the past week. 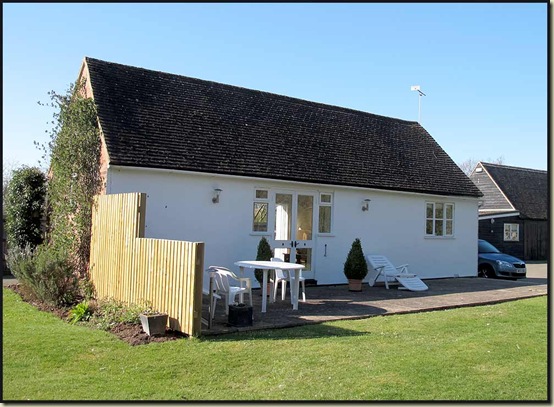 Several hours on the M25 later, and our butties were finally unwrapped in the delightful gardens at Cliveden, another National Trust property.  We’ve certainly got full value from our National Trust membership this week! 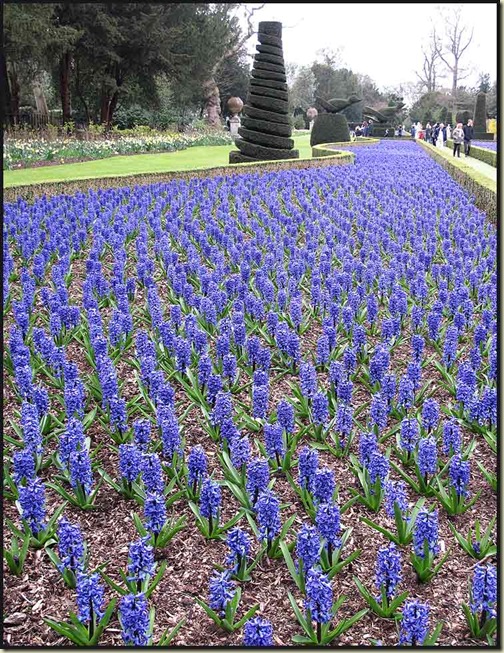 Whilst the gardens are fully open to the Public, the house at Cliveden is a posh hotel, a place of history, mystery, intrigue and scandal for over 350 years. 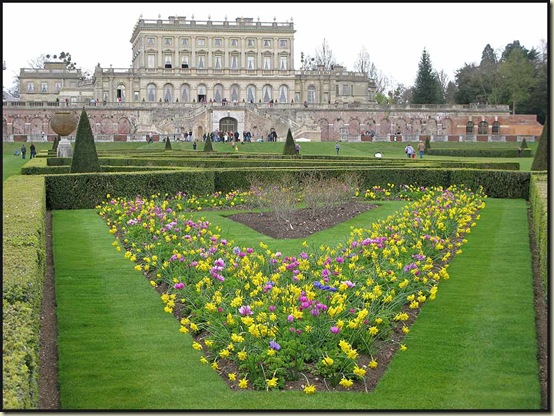 The current house dates from 1851, previous incarnations having been destroyed by fire, and the most notorious scandal involving the house was the Profumo Affair, which my contemporaries will no doubt remember – here’s an extract from the Wikipedia entry about that:

In the early 1960s, Profumo was the Secretary of State for War in Harold Macmillan's Conservative government and was married to actress Valerie Hobson. In 1961, Profumo met Christine Keeler, a London call girl, at a house party at Cliveden, the Buckinghamshire mansion owned by Lord Astor. Many years later Profumo would claim, in discussion with his son, David, that he had met Keeler previously at a night club in London called Murray's and "probably had a drink with her." Also present at the Cliveden party were Profumo's wife and the fashionable osteopath, Dr Stephen Ward, a long-standing acquaintance of Keeler. The relationship with Keeler lasted only a few weeks before Profumo ended it. However, rumours about the affair became public in 1962, as did the allegation that Keeler had also had a relationship with Yevgeny "Eugene" Ivanov, a senior naval attaché at the Soviet embassy in London. Given Profumo's position in the government and with the Cold War at its height, the potential ramifications in terms of national security were grave, and this, along with the adulterous nature of Profumo's relationship with Keeler, quickly elevated the affair into a public scandal.

Our journey continued uneventfully over the next two days, via Solihull where I took part in the Saturday morning Parkrun, (‘parkjog’ in my case) the first time I’d tried jogging for over a month, due to a pulled calf muscle – luckily it stood up to the test.  The runners here are much quicker than those I usually jog along with at Wythenshawe, with a turnout of 160 people, many of them club runners, whereas Wythenshawe – a newer event – usually gets fewer than 100 participants.

Finally, a visit to Dot, on her 87th birthday, concluded our holiday.  It was good to see her continuing to recover, albeit slowly, from her hip replacement that got infected.  Hopefully the antibiotics she needs to take for the next 2-3 months will get rid of the infection and obviate the need to go through the whole process again…

Here we are with her last Christmas Eve. 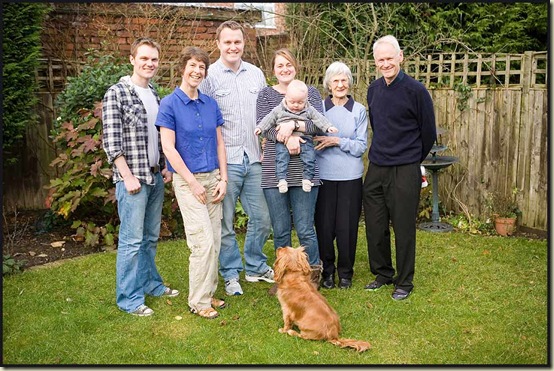