It will be my ninth ‘Challenge’, this year with Sue who will be making her fourth crossing of Scotland by foot (and in a boat across Loch Ness).

I booked some luxurious accommodation a couple of weeks ago and have now managed to link the ‘dots’. We go from Dornie > Cannich > Drumnadrochit > Aviemore > Braemar > Tarfside > North Water Bridge > Nether Woodston, so it’s a short and sociable route this time.

Anquet says 324 km (202 miles) with 11,500 metres ascent, but there’s every chance that the ascent will be much less if we avoid some of the high points we are I am aspiring to (Sue hasn’t been told yet) but will probably avoid.

I know various other bloggers are signed up for this year’s stroll, and Sue and I are looking forward to meeting some of you as well as many old and no doubt new friends, albeit Sue will probably be chatting whilst I bang away at the keyboard… I’ll try to be brief this year; there can’t be too much new to say!

You can click on the above picture to get a bigger version.

Hopefully it will be t-shirt weather again, as it was on much of last year’s Challenge. Here’s a random picture from – ascending Sgurr Mhurlagain on a sunny afternoon. 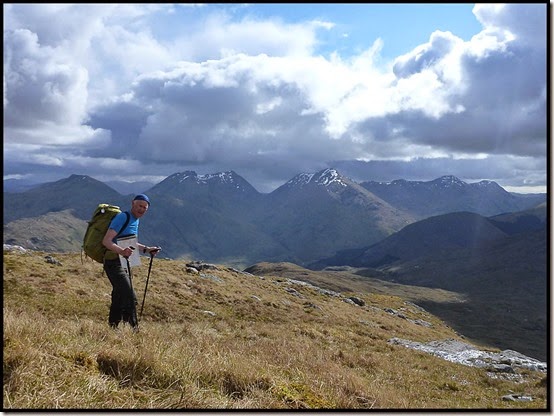 I must get round to doing something with last year’s TGOC pictures! 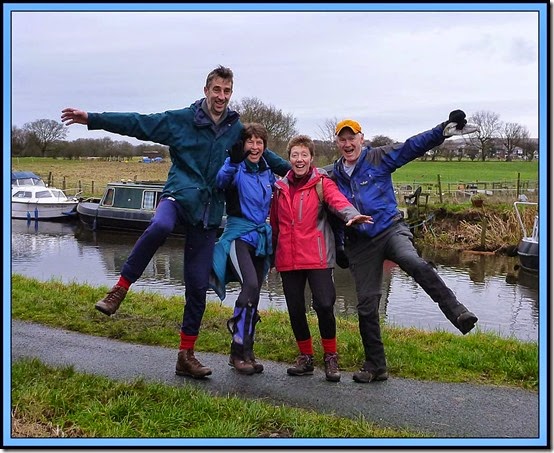 Here we are, Robert, Sue, Lyn and me, enjoying New Year’s Day on the Leeds and Liverpool Canal towpath in Adlington. It was to be Lyn’s longest walk since her disastrous arthroscopies over ten years ago.

Louise had joined us for the previous evening, but sadly had to miss the walk on account of being sent going to Coventry. 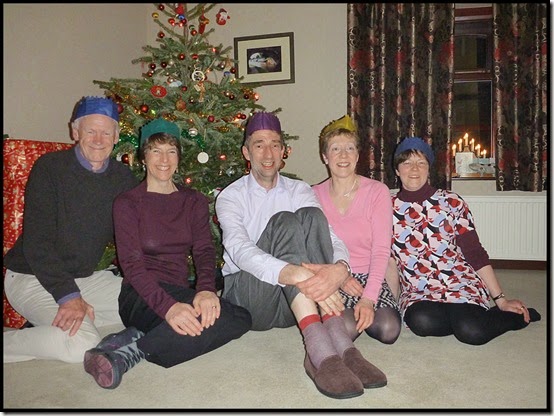 Instead of spending the last afternoon of the year looking for her boots, Lyn compiled this impressive menu. 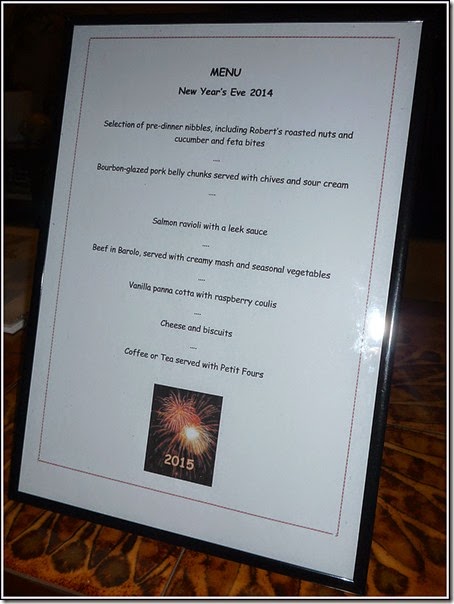 On our arrival - thankfully we were armed with panna cotta of the prescribed flavour - we were greeted by Robert’s whispered whimpers over a pan full of belly pork along the lines “how do you want my nuts roasting, Lyn?” followed by Lyn’s sputtered gasp of worried confusion.

Anyway, the evening went very well. The food was delicious and before we knew it Robert had embarked on a ten minute wrestling match with a cathode ray tube in an effort to find an official countdown to the New Year. At least he was more successful than the officials in Manchester’s Piccadilly, whose countdown lasted an additional four minutes due to a tram inadvertently parking itself next to the fireworks.

After a comfy night on a new mattress (thanks Lyn) we enjoyed a lavish breakfast and set off at 10.30 on an Adlington Adventure.

Readers should by now have realised that this is Adlington near Chorley, not the one in Cheshire. Our first landmark was White Bear Marina, one of the very first clients I visited as an auditor when I started work as an articled clerk with Thornton Baker in 1971. I think I’ve aged rather more than the Marina. 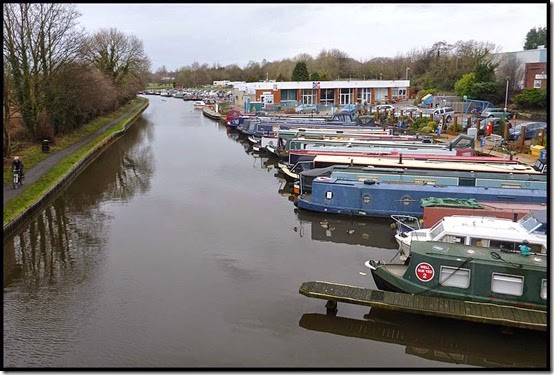 Given this reminiscence, and the time of year, ‘The Thief of Time’ seemed an appropriate name over which to ponder. 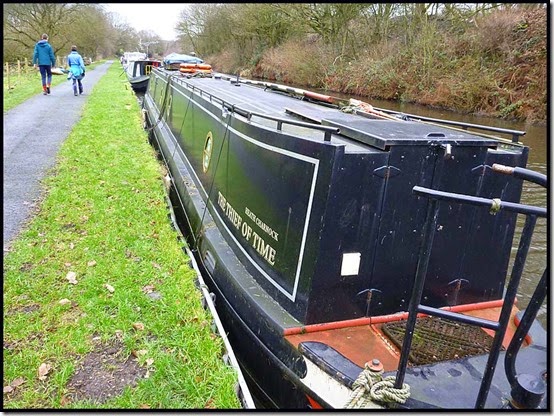 We soon reached the following sign, confirming that we were ‘on track’. We could hardly go wrong given half an eye on the yellow signs marking the route. 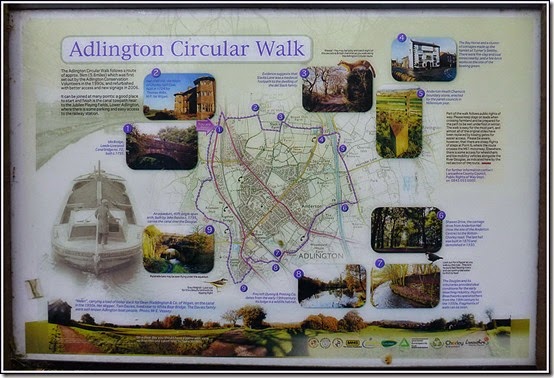 From the above sign, you have this view of Idle Bridge – bridge number 72 on the Leeds and Liverpool Canal. The bridge dates from 1795. 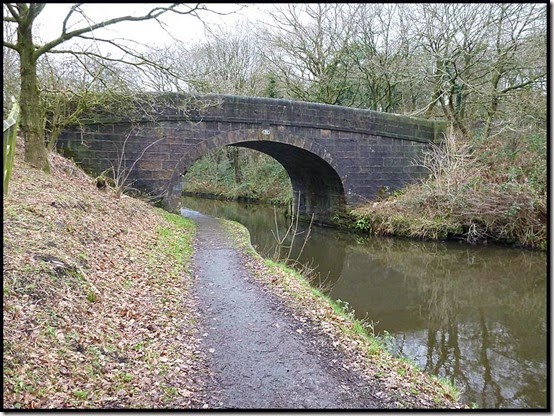 The route deserts the canal at Idle Bridge and heads uphill past some major railway bridge works on the Manchester to Preston line, as all the bridges need to be raised for electrification of the line. A huge project with much local disruption.

Onwards we marched, in the direction of Winter Hill, our first Marilyn sighting of the year (only geeks will understand; non geeks can say they have seen a Marilyn, but their friends will just offer looks of bemusement). 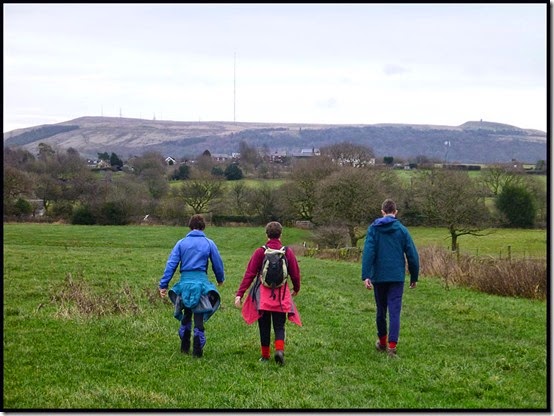 The M61 motorway, busy as ever, was crossed and re-crossed. 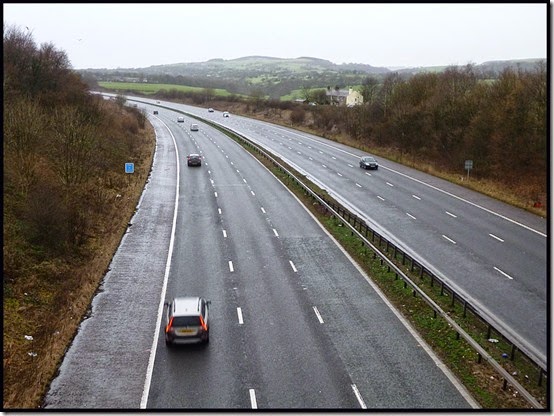 Then we found ourselves on a path through ‘The Shawes’ which turns out to be the carriage drive from Anderton Hall to the Bolton to Chorley road. Apparently the last hall was built in 1870 and demolished in 1930; I have doubts about this but I can’t find anything to support either the above dates or my doubts.

The carriage drive remains a good path, from which there were signs of life in a nearby giant bird box. Our eyes were glued to it. Eventually a grey squirrel emerged and ran up the tree. 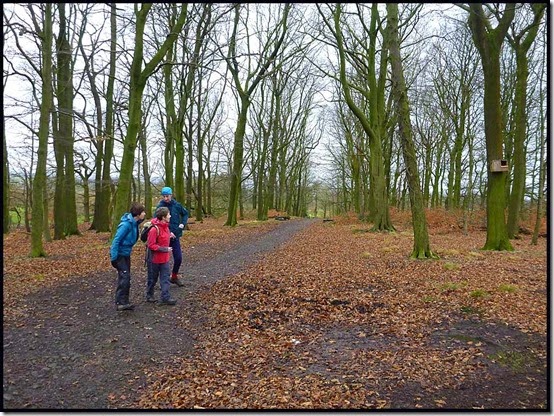 I’ve already commented on the well marked route. Perhaps it is a little too well marked in places! 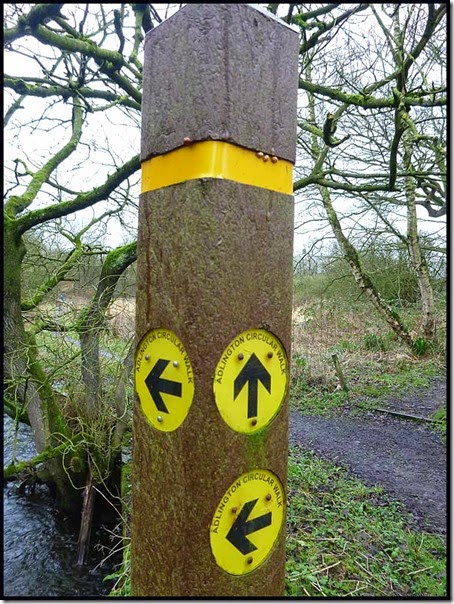 After crossing the Bolton to Chorley road, the route follows a thin footpath all the way to the Adlington to Blackrod road. The River Douglas is encountered, with numerous bricked remnants of the old bleach works that operated here from the nineteenth century until the 1950s. 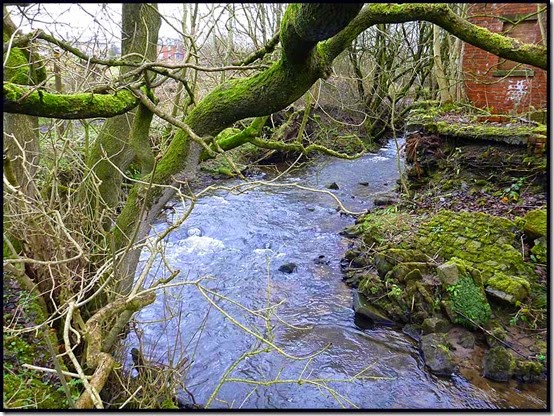 The pleasant path is literally yards from the centre of the village. 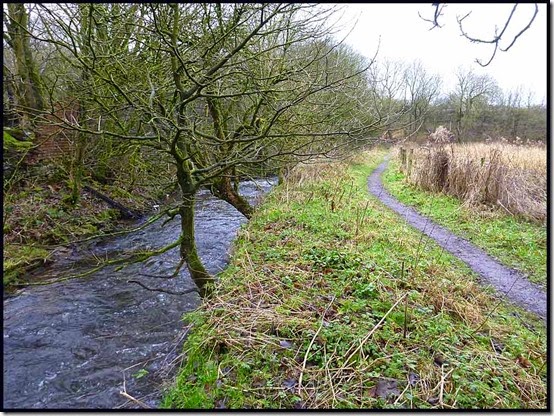 Some of the old fences seem to have succumbed to ‘ingrowing trees’, some of which have recently been felled. The stumps are studded with plastic vials from which chemicals might perhaps leach into the stumps and prevent further growth that might seriously erode the river bank and give rise to flooding. 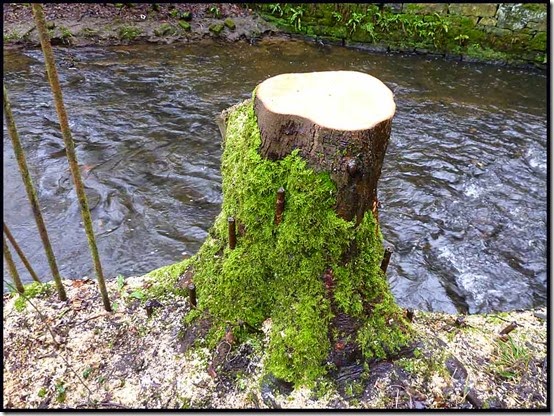 In the following image, the fence appears to have been granted victory over this particular tree. 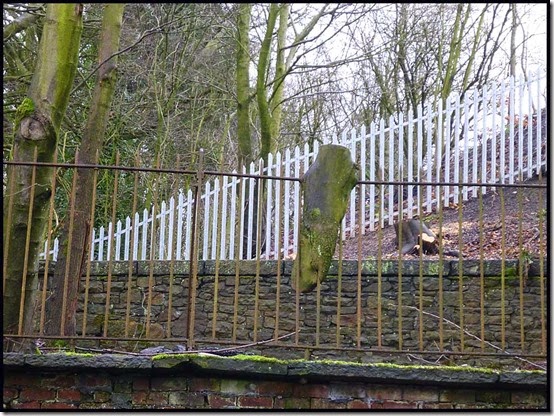 Sue didn’t know what to make of it all… 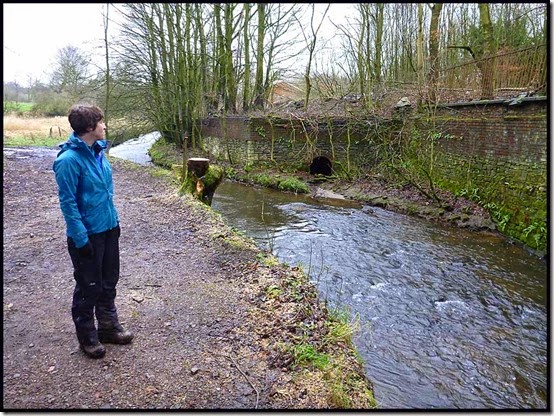 The following picture was taken just a few metres further along the path, which has now passed under the railway arch. The small object just below the parapet is another tree that appears to be growing in the bricks of the viaduct. Did the early Victorian engineers use fertiliser in their construction activities in the late 1830s? 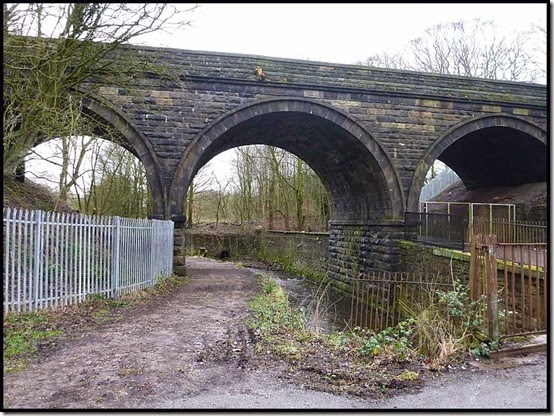 The locals in Adlington have certainly been very busy with their signs for walkers. Well done them! 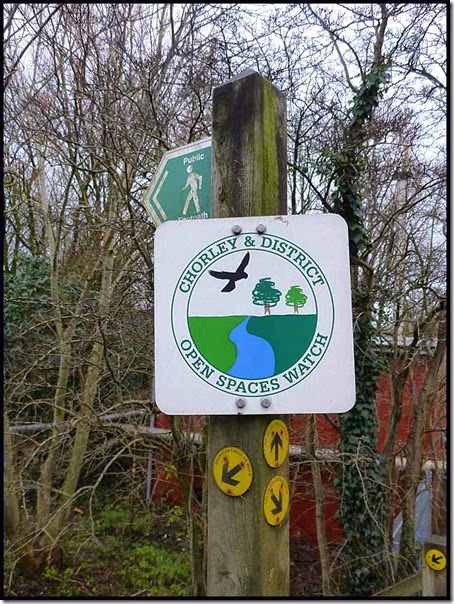 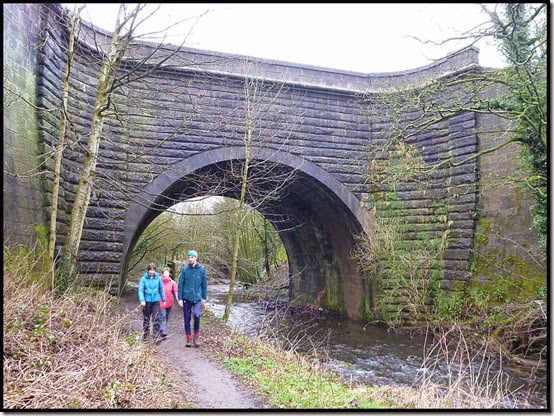 Our circuit ended back on the towpath for the short stroll back to White Bear Marina, then to Lyn’s house for lunch, just as the heavens opened for the rest of the day. 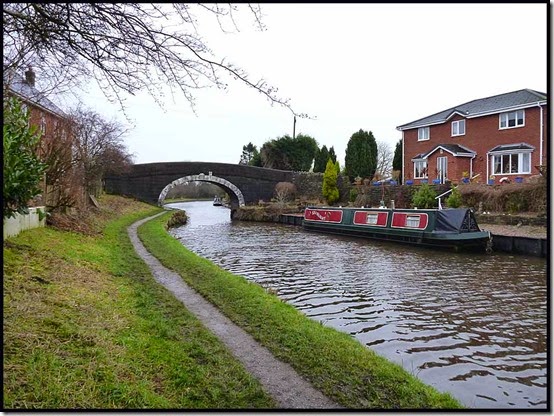 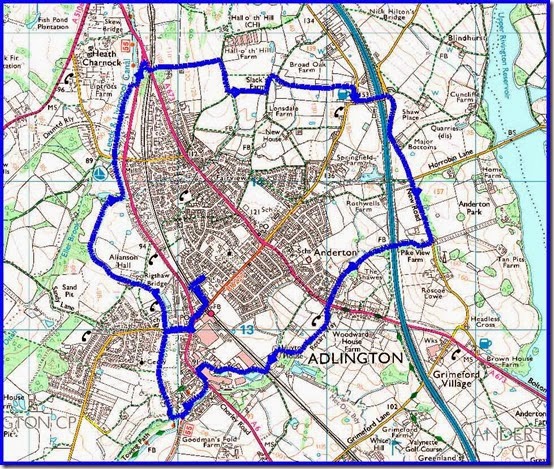