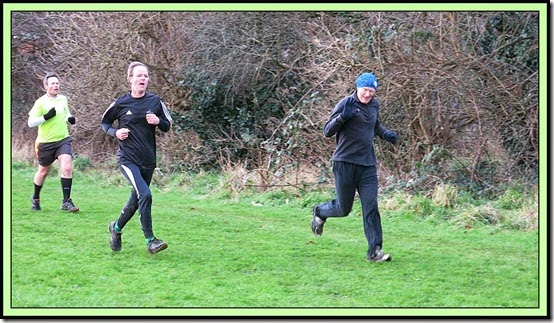 Sue and I turned out for today’s Parkrun in fairly benign conditions, though in order to avoid further destruction of the northern touchlines, Andy and Co had devised a route to the south of the football pitches. I hope we didn’t do too much damage.

We started in a different place to usual, resulting in a little congestion in ‘Holloway’s Bog’, but nobody got too badly trampled.

As Sue had pulled a muscle in between getting out of bed and being handed her early morning cuppa, she helped to marshall at a distant part of the course, and took the opportunity to snap a few of us – 18 pictures that can be viewed .

There were just two of us in my age group. I passed Michael on the first lap, accusing him of being an old timer (he’s a couple of weeks older than me), which he told me afterwards had given him the impetus to make an adrenaline fuelled spurt on the second lap which left me for dead. Well done, Michael.

The route, which is probably about 5.1 km (Parkrun ‘wet weather’ routes are always a little longer than the normal routes) was two laps of the course shown below. Everyone seemed quite happy with it, so well done ‘management’ on coming up with this after having to cancel the run last week for fear of damaging the pitches. 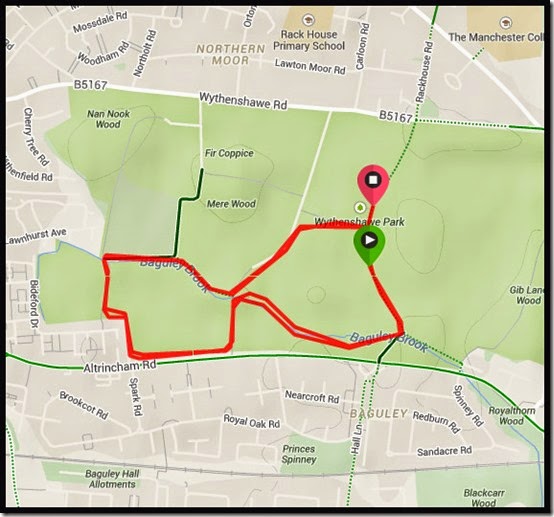 Today’s 183 ‘runners’ included 77 females, a good proportion, and everyone finished within an hour, in some cases only just within an hour, which makes me think that they either had a major incident, or did they perhaps walk? “Parkwalk?”

Anyway that made for a very sociable interlude in the cafe whilst the marshalls swept up the last of the runners and collected all the signage. In fact we’ve come to spend more time in the cafe than we do on the run – that’s to some extent the nature of Parkrun.

PS Sunday morning had me puzzling over a photo published on Wythenshawe Parkrun’s Facebook page, taken by volunteer Bea Holloway, one of the younger members of the Holloway dynasty. I couldn’t resist including it below – Wythenshawe Park at its best on a Saturday morning. Well done Bea, I hope you don’t mind me using your little piece of magic. 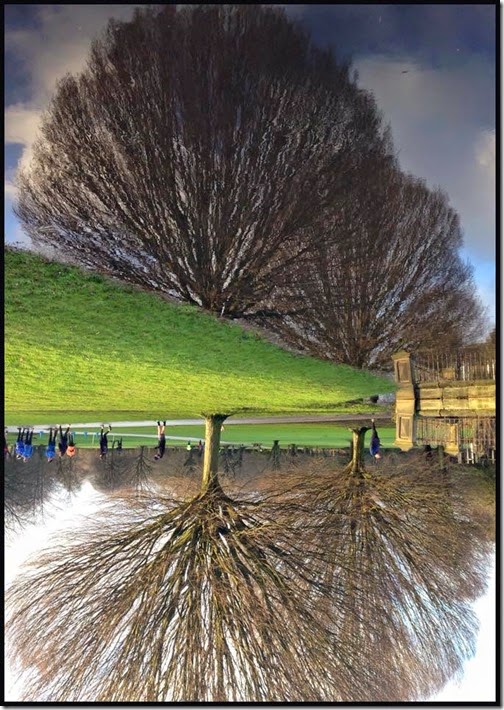 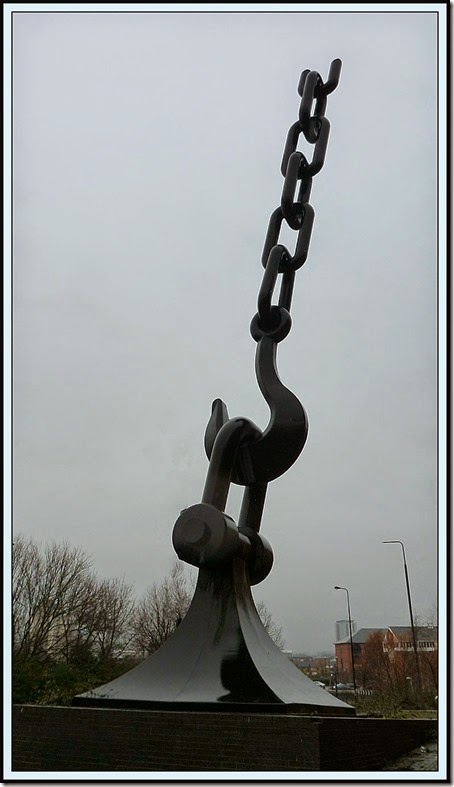 Don’s flier for this walk also included a route description:

A City United by Canals

We will catch the Metrolink Tram to Stretford, where we will join the Bridgewater Canal and walk towards Manchester passing Old Trafford and onwards past Pomona Docks to join the Cheshire Ring through the City Centre and the Gay Village to pick up the Rochdale Canal for a short time and then join the Ashton Canal where we will walk to the Etihad Stadium.

At the Etihad Stadium we shall walk down Joe Mercer Way to Philips Park where we will cross the River Medlock and enter the Jewish Cemetery and then a bit of road walking to re-join the Rochdale Canal at Newton Heath and walk back to the City Centre to catch the Metrolink Tram home from Shudehill.

On a rainy morning the Timperley contingent made the short trip to Stretford, walked there and back to the A56 bridge, then shivered under the bridge next to the sculpture whilst Don and his disciples made their way to these ‘foreign parts’ from their rendezvous point in Radcliffe.

What a rabble! ‘Plodder’ numbers seem to be on the increase, with 16 turning up for this towpath ramble. Much to the annoyance of the cyclists, Canadian Geese and small children in push chairs who got booted into the canal by the unruly hikers. Well, perhaps they would have been if they’d ventured out into the rain to confront this bunch of miscreants.

The newly surfaced towpath now leads past Watersmeet and all the way to the long-standing diversion around some construction work in Old Trafford.

The diversion afforded us the opportunity to admire the two "Skyhook" sculptures that were unveiled in 1995 as part of the regeneration of the Trafford Park Industrial Estate.  "Skyhooks" was commissioned from Brian Fell who actually produced two 17-metres high hooks and chains. The first is pictured below at the entrance to the Park, and the second one, pictured above, is located on the other side of the old Telephone Exchange near Wharf End. 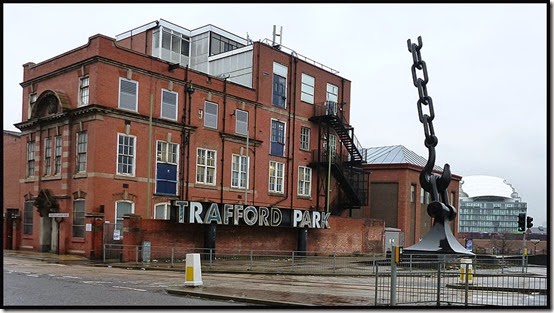 Don’s well researched route passed some convenient picnic benches in Castlefield where the rain eased for a while as we tucked into our jam butties. 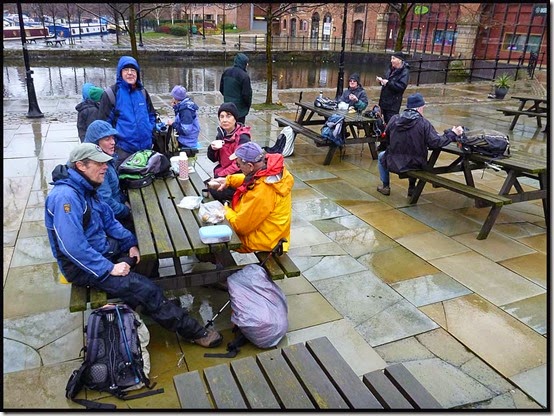 Luckily, there were exactly 16 portions of , with which to bribe the assembled entourage into a self-timed attendance record. 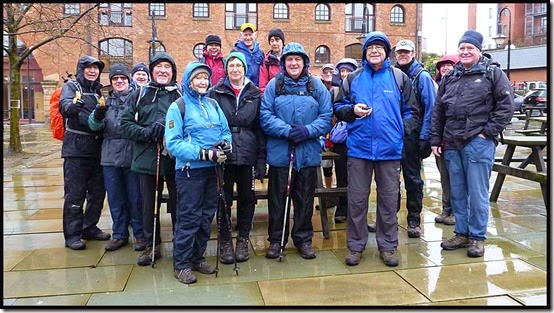 Soon it was time to leave – heading into the complexity of the canal system at Castlefield. Looking back, that’s the Wharf pub – an excellent place that despite the lack of custom gained from our party graciously allowed the rabble to use their ‘facilities’. 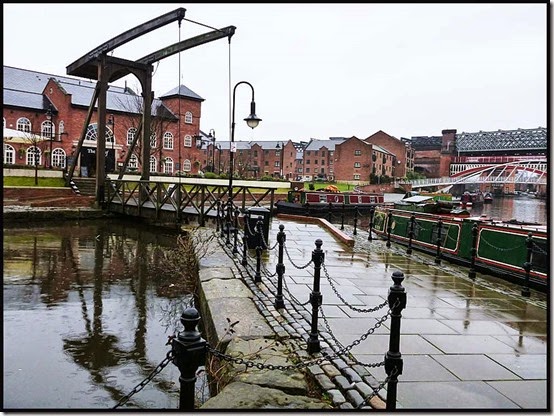 The Beetham Tower loomed in front of us through the gloom of the rainy January day. 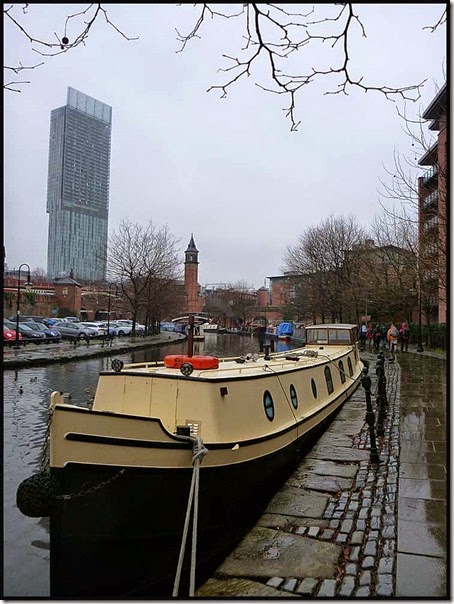 Can you spot the bird box? We saw lots today. 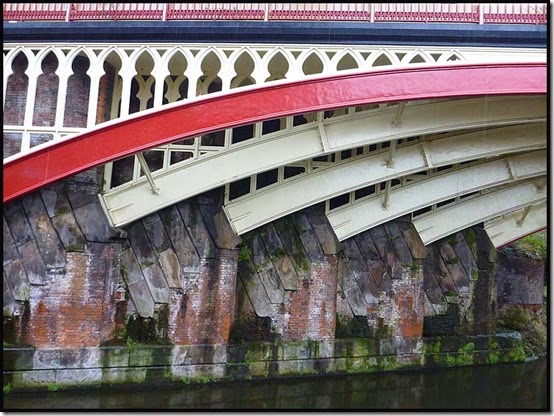 Mike needed a hand to cross this lock, but all except one of the party managed to cross without incident. 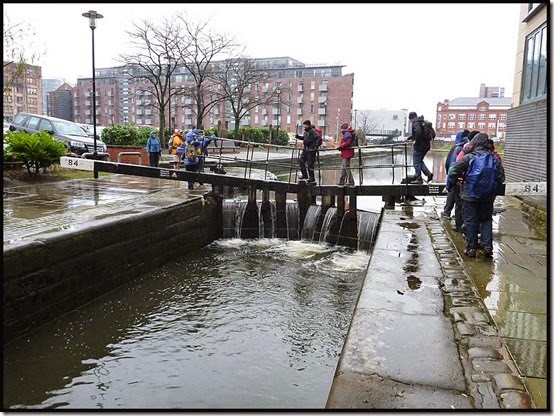 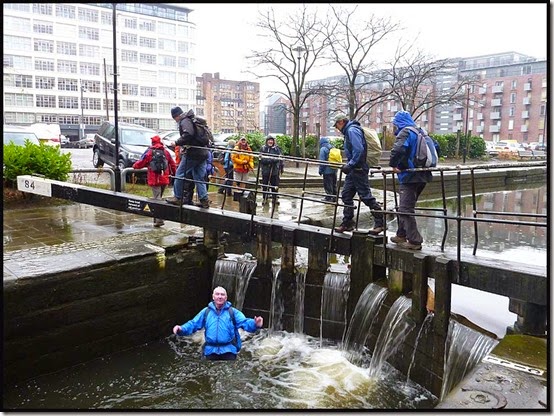 “We’ve lost one, Don” shouted Ken after a discreet shove had seen off an elite poser.

After rubbing him down (Barbara did that) and sending him home, the rest of us continued to a ‘light blue zone’ that had some members of the party drooling inanely over something like Ardwick Association FC, and others running for cover. 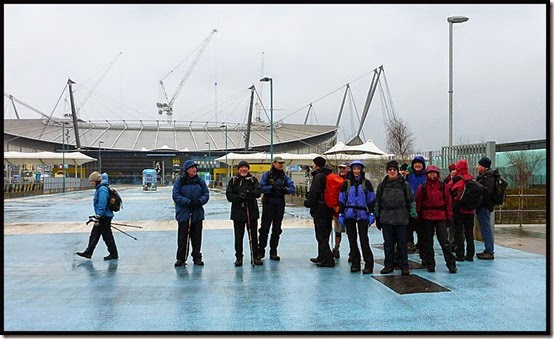 Following the route so adequately provided by Don above, we soon made it to Philips Park, where Don produced his second instalment of jam butties and announced a second lunch break.

It didn’t last very long, as unaware of this ‘Plodder’ tradition, most of us had eaten all we had at the first opportunity in Castlefield.

Not to worry, it was a good spot to pause for a cuppa before heading across the River Medlock and into the Jewish Cemetery. 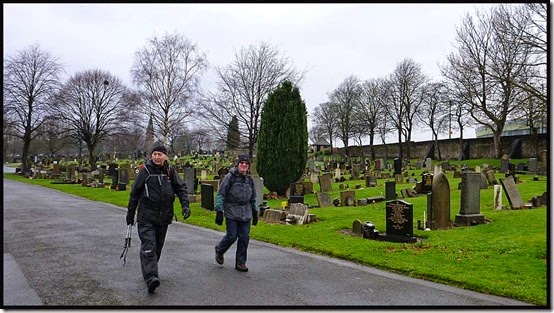 We soon found ourselves heading back into Manchester along the Rochdale Canal on a route oft described on these pages. In fact, there’s nothing new about any of this walk, apart from some of Don’s clever jinks through Castlefield, hence the introduction of a fictional element. (I can confirm that no children, cyclists or old men were drowned by thugs during this walk.)

Here’s the route which, including our there and back to Stretford stroll at the start, amounted to some 20 km, with minimal ascent, and took a shade over four and a half hours. 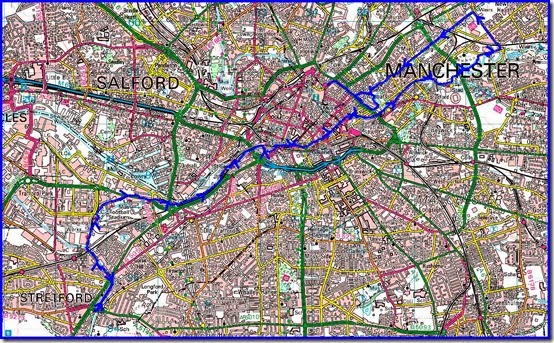 Thanks go to Don for organising this and for so charismatically gaining a record turnout in rainy Manchester when anyone with any sense was out playing in the snow that currently graces our surrounding countryside. 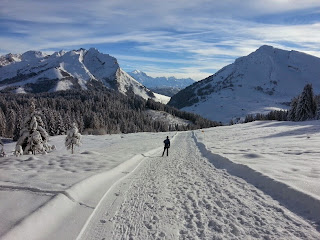 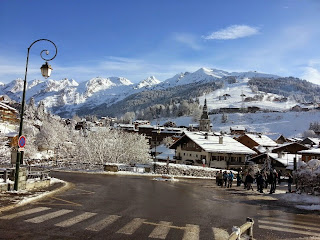 Last night's concert at the Salle des Fêtes de Thônes (a nearby village) was excellent. Billed as the 'Concert du Nouvel An' it comprised performances from a number of local orchestras, including at least one of Yolaine's family, a little drummer boy with long hair and a blue shirt. Ginger Baker would have been impressed! Numerous relatives and friends were in attendance (Yolaine has 32 cousins) and we were made to feel part of the family.

Today we rose to a crisp blue sky day that saw La Clusaz and its surroundings full to capacity. With limited time available we drove up to La Croix Fry and enjoyed a walk along the path towards the Beauregard Plateau, admiring the snow laden trees and the views towards Mont Blanc as we went. Sue is pictured on a piste facing the latter, and today's other picture is a parting shot of La Clusaz as we left the village that has been our home for the last week.

Our apologies go to P and Y for not spending as much time as we should have done cleaning the apartment, I'm sure that given the superb weather you can understand why we left that job to Shawn. Thank you for having us and we hope to see you all again soon.

Sent from The Far North (aka Timperley).
at 19:07 2 comments: Links to this post