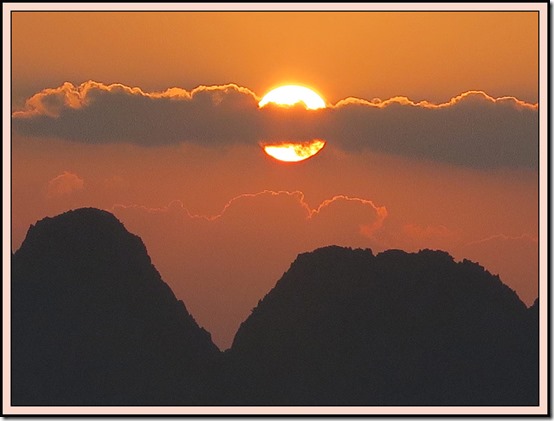 I have well over 2000 pictures from my walk across the Pyrenees earlier this summer. It was therefore quite a struggle to cull them to a manageable number to show to Stockport Walking and Outdoors Group (SWOG) last night.

It was worth the effort though, as well over 30 folk turned up despite the competing attraction of a baking show that saw 14.5 million people tuned in to the most watched TV programme of the year.

With standing room only at Hazel Grove Civic Hall it was great to have such a good turnout. Thanks in particular to a contingent of friends who are not members of SWOG but who made a special effort to attend. It’s the first time I’ve given this slideshow and it did slightly run over the hour that I was supposed to take. I hope that didn’t upset anyone. It was still impossible to include everything I wanted to say, but hey, if you would like more you could always purchase a copy of my new book – ‘Another Pyrenean Adventure’, of which a few copies are being printed next week. It’s a companion volume to my 2013 ‘A Pyrenean Adventure’ book, of which I still have a few copies in stock. Both are available (basically at cost) for £10 including P&P for those in the UK, a little more if you are overseas .

It was a great walk, but I won’t be doing it again! 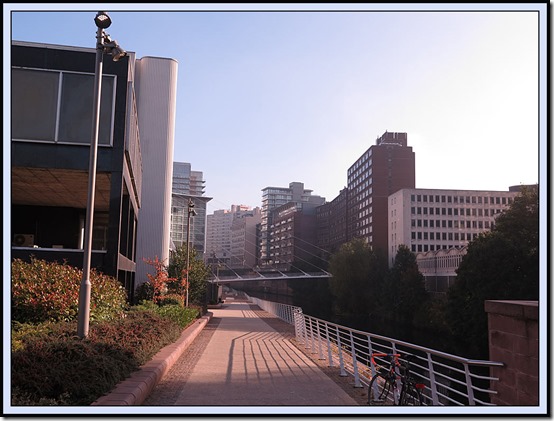 This was a ‘curry walk’. With no curry! A curry-free curry walk.

Most of us met at Deansgate Metro Station, where security for the Conservative Party Conference was getting into position. Phil arrived later, on the approach to Radcliffe.

We first headed down to the River Irwell where it morphs into the Manchester Ship Canal. Here, there’s a statue of (1783 to 1857). He was Salford’s first MP, a vegetarian, and opposer of slavery and of the death penalty. 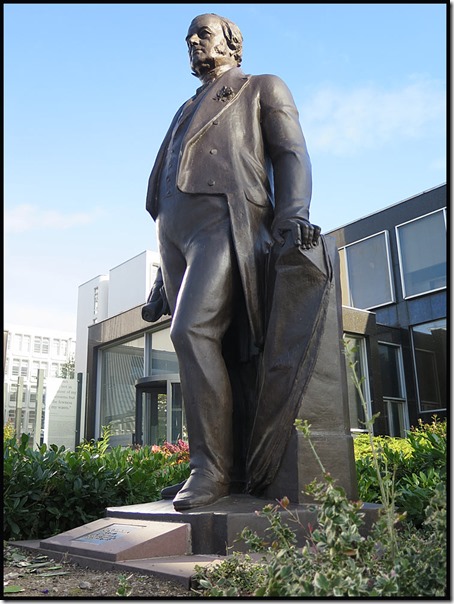 Across the road, Manchester city centre continues to ring the changes. 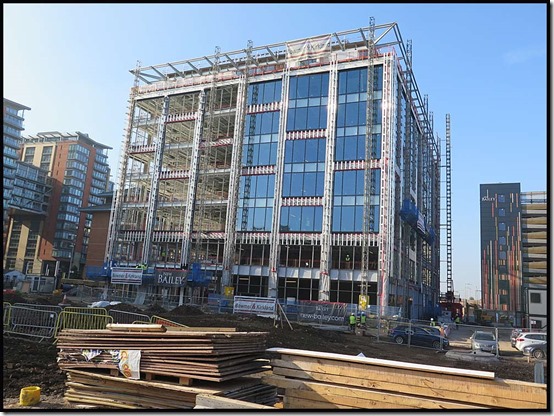 Across the border in Salford, times are hard. The Church Inn is one of several derelict hostelries that line Chapel Street. 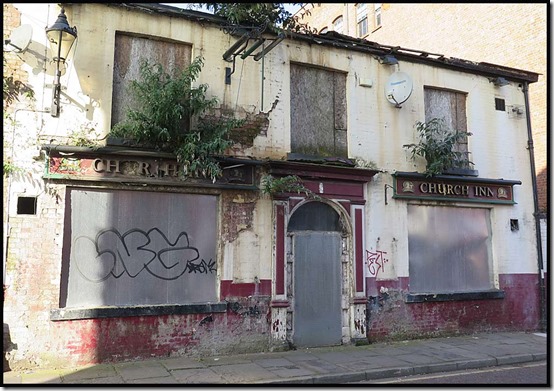 St Philip's Church does provide an iconic bright spot, as well as other buildings in Salford. 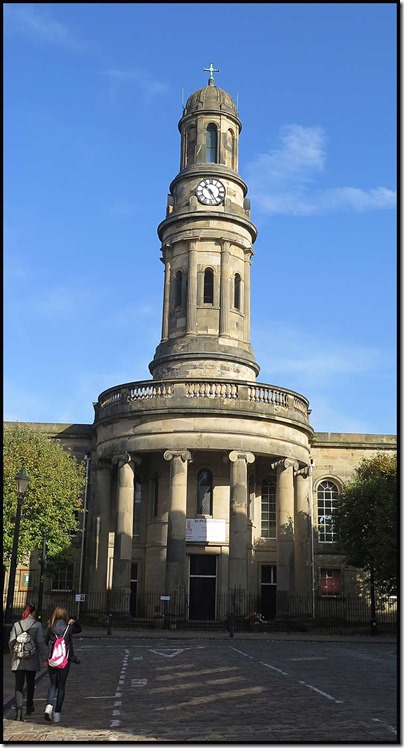 Our route left the streets before Salford University, and we headed through Peel Park - one of Brotherton's heirlooms. 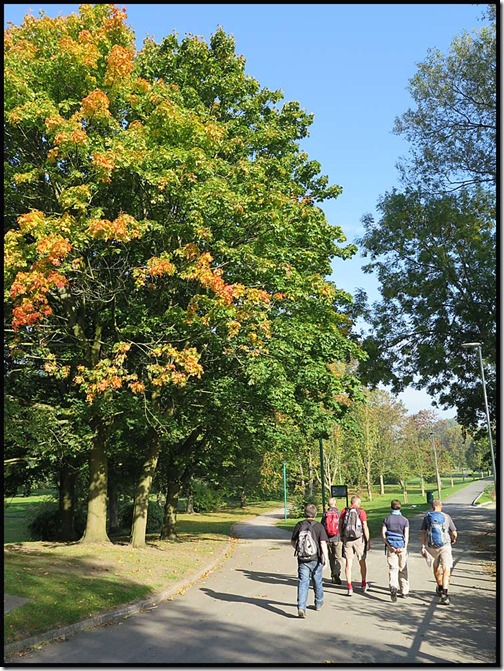 Some of the trees are just starting to turn. This is the start of the , which we followed all morning.

There are numerous footbridges and road bridges across the River Irwell. Some sport decorations that wouldn’t be found on more modern constructions. 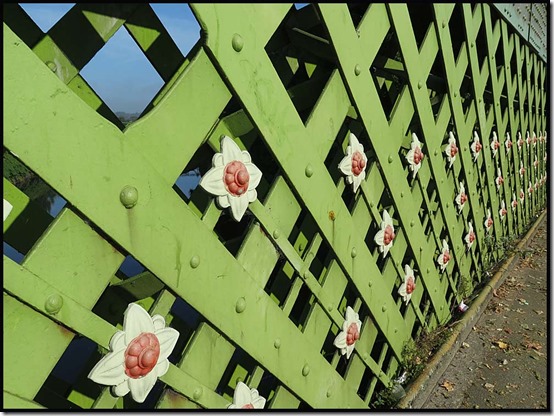 In the vicinity of this weir there were many swans, as well as Goosanders, Little Grebes, Great Crested Grebes and Mallards. 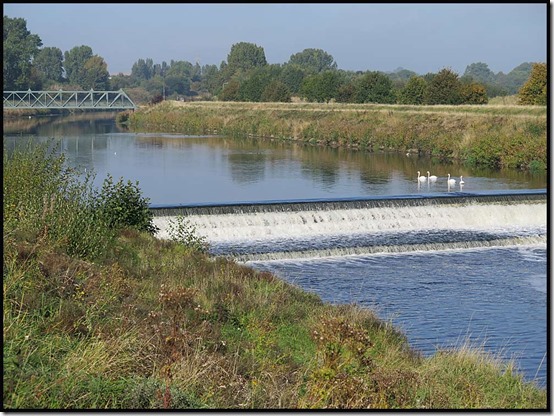 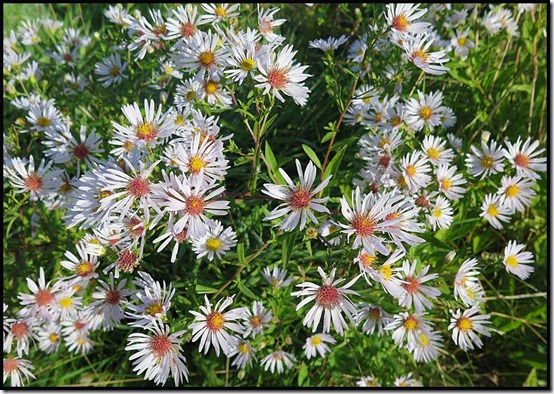 This bridge at Agecroft, erected in 1832, carries the Thirlmere Aqueduct to the storage facility in Heaton Park. 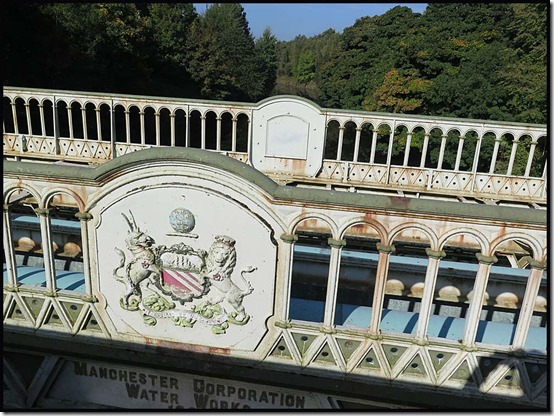 Here’s our team for this sunny stroll - Martin, Sue, JJ, John B, Rick and Rob (we were later joined by Phil). 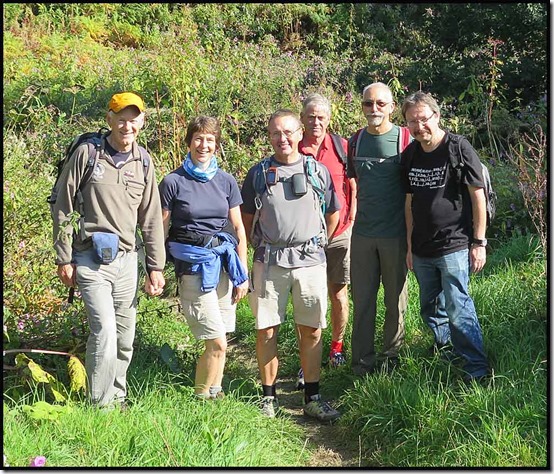 A nearby disused viaduct carried the link line between Clifton and Radcliffe. Our path led to the old railway track, past Himalayan Balsam, whose invasion goes unchecked around here. 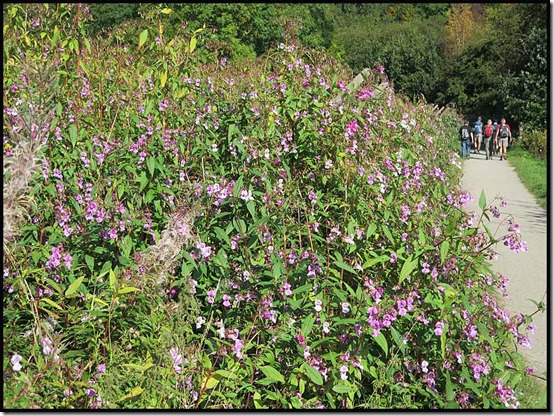 We passed a short tunnel leading to Philips Park in Prestwich.

Soon afterwards, a footbridge led us over the M60, after which we followed the course of the old link line that had led over the tunnel.

and a tea break proved most welcome, albeit a bit late to be described as ‘elevenses’.

This is the first sculpture we noticed - Trinity, which focuses on the period the railway line was constructed, the deaths of many of the 'navvies' involved in the digging of the Outwood cutting, and the pre-railway history of the site. The flowers' names hint at the loss of these unknown workers and are a memorial to them and reflect the woodlands that surround the site. Harebell = Grief, Snowdrop = Consolation, Rosemary = Remembrance. 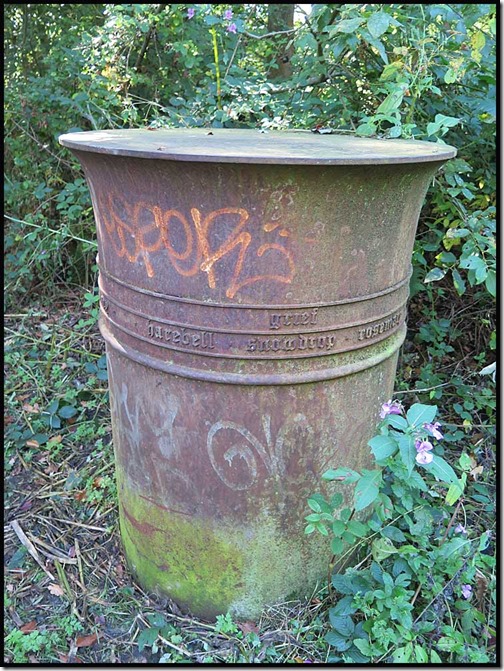 After a long spell of dry weather, even normally muddy paths were dry, but Sue and I still got sore ankles as we were both trying to walk in new boots.

On the site of the former Outwood Colliery, Ulrich Rückriem has created one of his largest stone settings to date. It is composed of ten large stone pieces set over a number of locations; one column marks each of the two main entrances, a group of seven tall slabs are installed on a flat plateau, and the largest slab, 25 feet (7.6 m) in height (below), marks the former railway track. These stones are split horizontally and/or vertically into several parts then reassembled into their original forms. 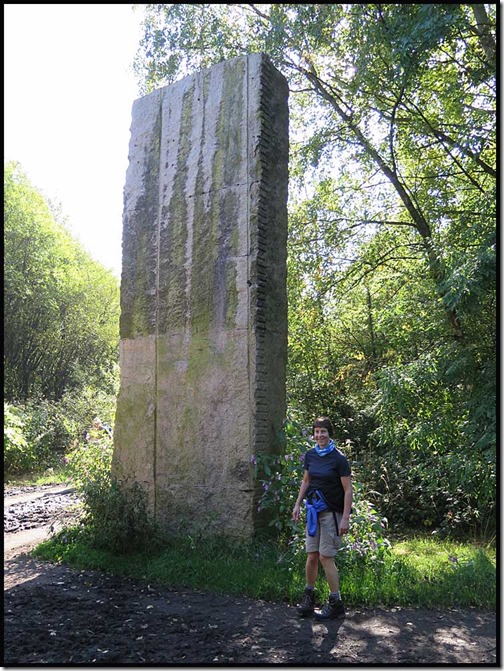 Before reaching Radcliffe, we left the disused railway to the cyclists, who were becoming a bit of a nuisance (why don’t people buy bells!), and joined the now defunct for the walk into Bury 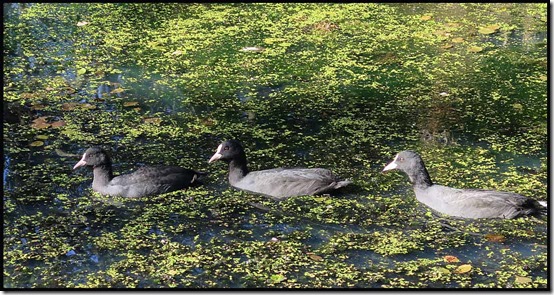 ... and a lone male Mandarin Duck (he should get together with Timperley's lone female). 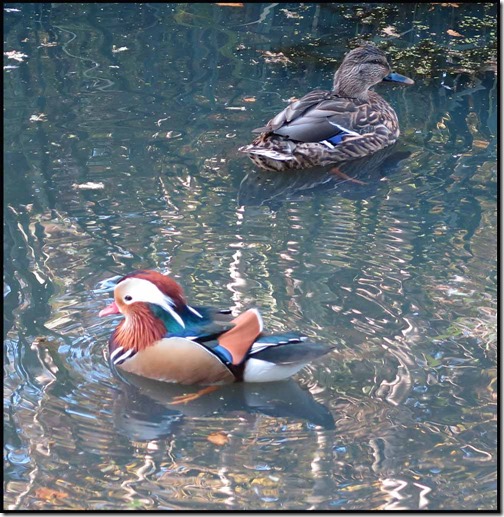 The lazy Mallards were failing spectacularly to clear the weed. Perhaps they were pondering the reflection of an old chimney. 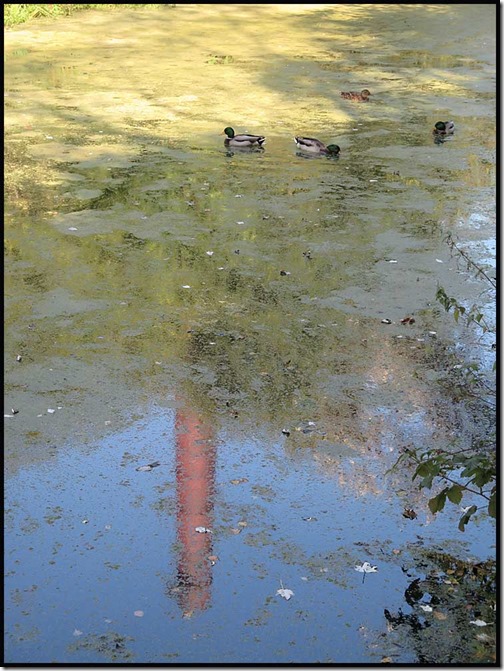 This wicker work is the centrepiece of a wonderful garden next to the canal in Radcliffe. 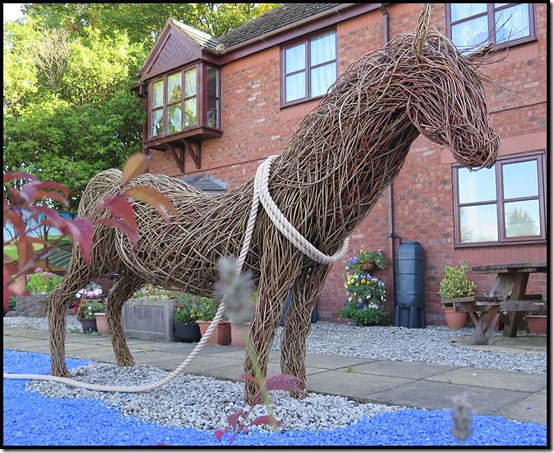 Another ‘sculpture’: 'Water Made It Wet' This text work by New York-based artist Lawrence Weiner is located on an over the Bolton Bury canal in Radcliffe and represents the artist's attempt to understand the nature of water itself.* 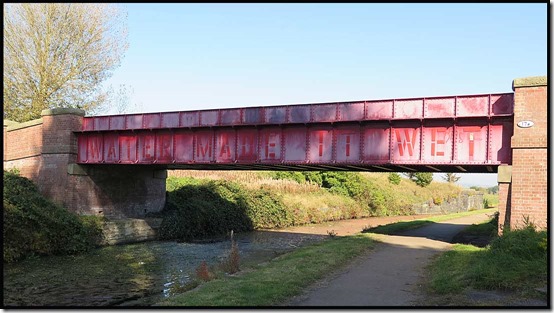 There were small and large fish, including a pike, in the canal. Here, on the last stretch to Bury, the team is tracking a pike. 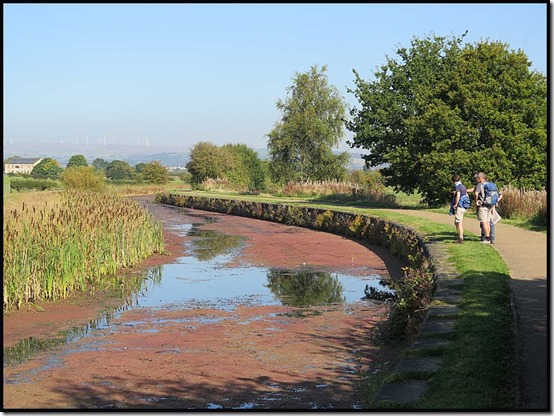 Even though the canal is disused, the towpath is in excellent condition, and it led us gently into Bury, past several churches and a fine library building. 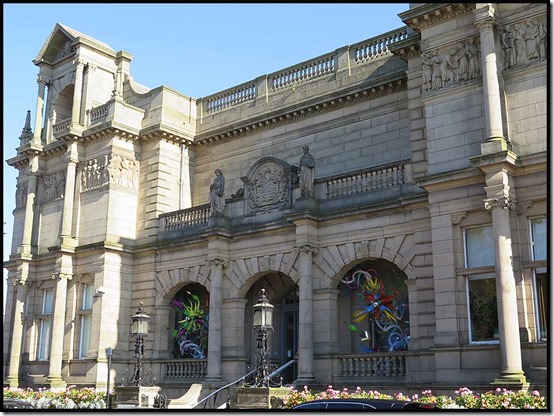 Lunch was taken at Katsouris – excellent value and a good substitute for the usual curry, then we went home. 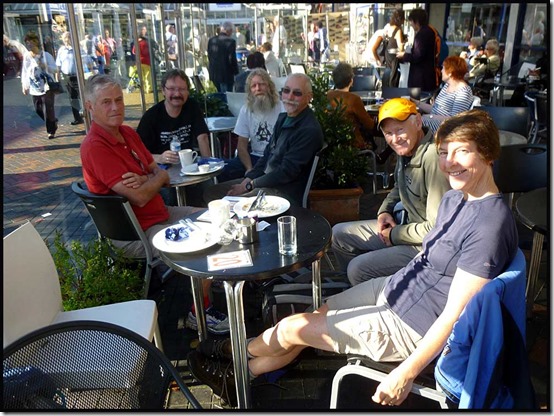 Here’s our route – 21 km, with 200 metres ascent, taking 4.75 hours, which is exactly what Naismith would have taken. 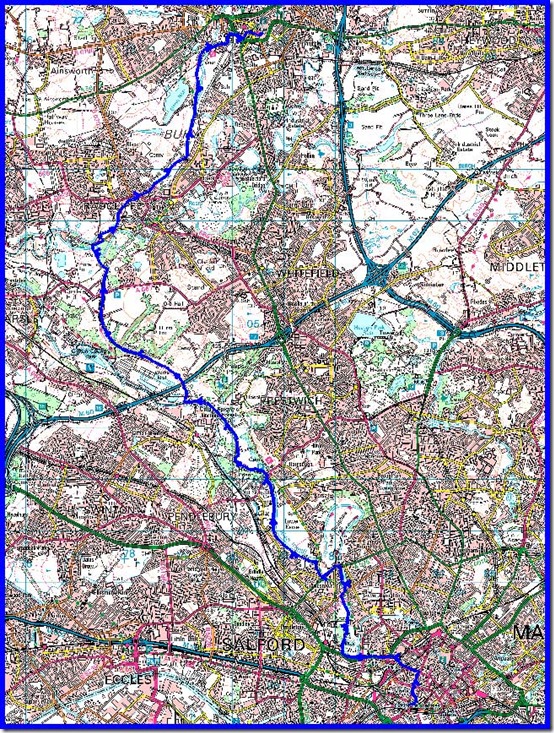 Sue and I both felt a little weary after this walk, despite eschewing a session at the pub. Something of a surprise to me then, when I managed the at a good pace the following morning! Under 22 minutes for the first time in over a year.