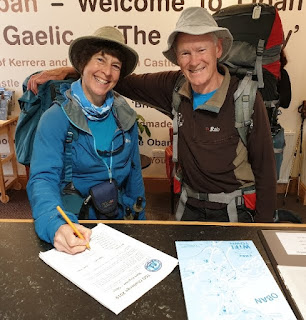 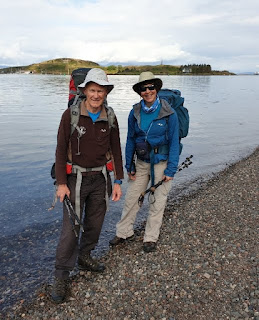 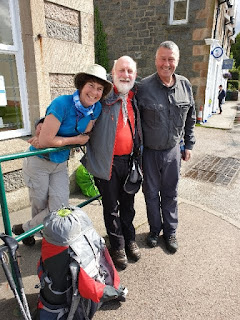 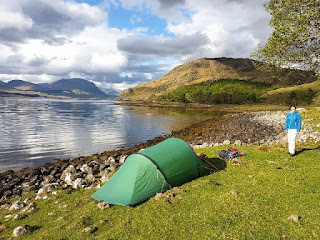 On a lovely sunny morning, we enjoyed a very good and sociable (other guests were fascinated by the TGO Challenge event) breakfast at Lagganbeg, then we strolled along to the youth hostel to sign out and meet with Markus. We walked with him all morning, until Sue and I paused for lunch in the shelter of an overhanging tree. Markus walked on to Taynuilt with Michael Colditz, whose route I vetted a couple of months ago. We didn't see them again.

Meanwhile, Richard and Rosie accompanied us to Taynuilt, where we spent a most relaxing hour and a half with them and Caburn in the warmth of the Robin's Nest Café. John (80) arrived as we were leaving. We do hope he has a successful Challenge this year after narrowly failing to finish last year.

By the time we left the café the sun was shining and all our waterproofs had dried. We strolled on easily to the shore of Loch Etive, where William had already set up camp. He encouraged us to join him. We found a perfect spot for our Hilleberg Nallo tent about 50 metres away from William.

Scott, a first timer who we'd encountered along the path, continued on past us, and Richard and Rosie did likewise. We can see their palace on a nearby headland. Peter and Rachel soon turned up and filled in a space next to William.

We thought this would be a very quiet place to camp, but a cuckoo has decided to broadcast next to our tent. Better than a black grouse leck I suppose.

Sue proceeded to cook an excellent dinner whilst I rested my back and composed this diary entry.

The day's walk was almost all on hard surfaces on narrow lanes. We have been blessed with a wonderful array of wild flowers in the hedgerows, and it took just an hour for the resident cuckoos to announce themselves.

Today's pictures:
Signing out
Dipping our feet in the sea at Oban
Sue, John and Richard outside the Robin's Nest Café
Day 1 camp beside Loch Etive
at 19:55 4 comments: Links to this post 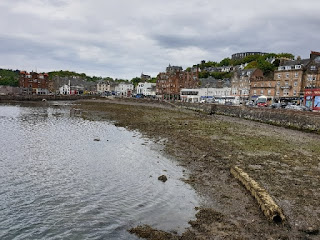 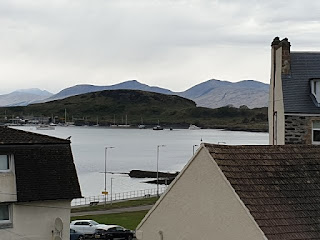 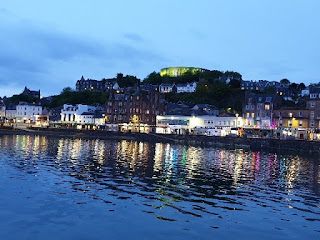 Breakfast at Tesco in Montrose, and a chat with JJ, who turns out to be on the campsite. We should have met up with him last night.

9.24 train on a cool, cloudy day (but thankfully yesterday's driving rain has gone away), to reach Glasgow at 11.15. Only two other TGO Challengers on the train - Graeme and Marion, with whom we had the good fortune to spend a very pleasant couple of hours.

An hour in Glasgow gave us plenty of time to encounter numerous Challengers, and Denis Pidgeon who was there to wave us off. He was looking well apart from a seriously painful knee.

We also managed a trip to Tiso's to get the mug that Sue had forgotten. We didn't attempt to buy a substitute for the Kindle reader left beside my bed in Timperley. Never mind, there's not much time for reading on these trips.

There followed a three hour scenic train ride to Oban in the company of Humphrey and numerous others, then a ten minute walk to Lagganbeg Guest House, where we had plenty of time to sort and re-pack whilst enjoying the view from our attic window (second picture; the first was taken from just outside the station).

A 6pm rendezvous with Markus and Alison J (on an evening visit from Ford) at the Markie Dans bar preceded a most enjoyable and tasty meal at the Waterfront Fishouse Restaurant, for which Humphrey (aka HMP3) also joined us.

Walked back to B&B in the last of the daylight - see bottom picture, and can you spot McCaig's folly in two of today's pictures?
at 22:16 No comments: Links to this post 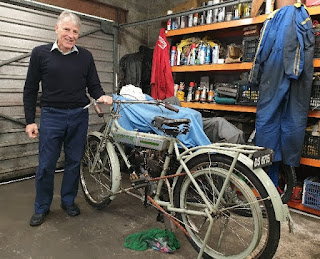 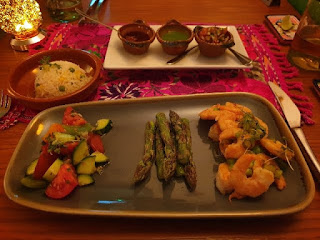 A wet day on the motorway was enlivened by a visit to my old school mate, John, whose passion is the restoration of motorised cycles. The top picture shows his immaculate Moto-reve. He has many more similar machines, and a Halfords hybrid.
Thanks go to Alison for letting us use her flat in Montrose. We are very comfy here after a fine meal at the El Tajin Authentic Mexican Restaurant. Great food. Highly recommended.
at 22:23 No comments: Links to this post

Monday 6 May 2019 – A Bike Ride to Bury, and the Dixie Beats at Eagley Jazz Club 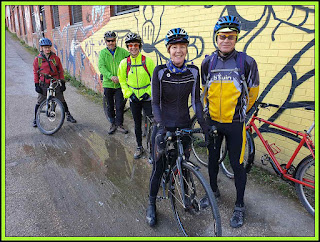 I’ve described this 70 km bike ride before. . Well, that was nearly six months ago. Doesn’t time just fly past at a terrifying velocity?

I was surprised to get a group of six of us on a Bank Holiday when I thought people would have other commitments. Some did have other commitments, hence Sue, Jeanette and Alastair turned round after the above photo was taken on the outskirts of Castlefield, leaving Richard, Paul and me to brave the predicted deluge.

The route passes as excitingly as it can muster through Salford, where this fine church is one of the landmarks along the way. 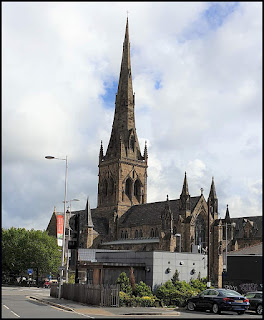 I got into a bit of a navigational muddle in the Irwell’s oxbows, but the gents seemed happy enough. 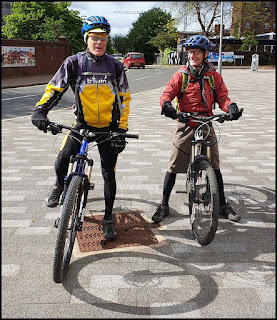 Before reaching the fleshpots of Bury (namely the excellent Dynamite Raw Café), we arrived at the now defunct Manchester, Bolton and Bury Canal, where a couple (not this couple) were trying to de-choke the weedy waterway. 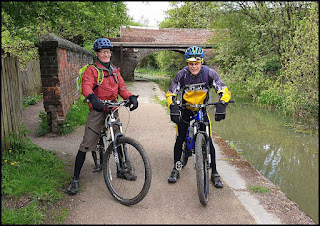 The ride then continued as planned, with a few short bursts of light rain, but nothing that enticed us to don waterproofs. There was an amusing incident at Gigg, where the bridge over the River Roch has been declared unsafe. It may be unsafe for heavy vehicles, but it was easy enough to lift our bikes over the barrier whilst a group of women debated whether or not it was wise to cross, possibly continuing that debate until long after we had gone.

The Rochdale Canal and the Bridgewater Canal have a thriving population of Canada geese. That population is expanding by the day. This chap looked as if he had just escaped from his shell. We saw several plump looking herons today, perhaps benefiting from this ready supply of food, whilst cormorants skimmed low over the canal in search of the fish that the herons would normally go for. 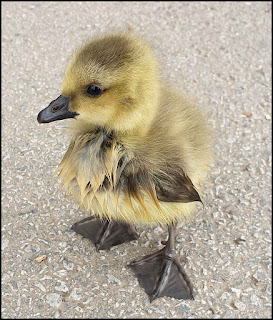 Meanwhile, we await the swifts that make their home under our eaves. They should arrive tomorrow.

Later, Bolton’s leading jazz band (Bolton’s only jazz band?), the Dixie Beats, gave a great performance at Eagley Jazz Club. They really were on top form in front of a record attendance of 83.

As usual, click on the pictures for better images. 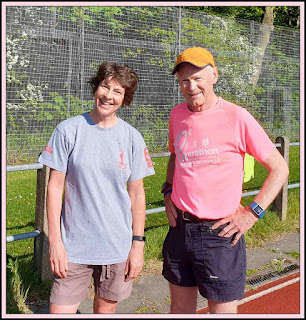 Sue joined me today for a regular Sunday morning 5km jog around Wythenshawe Park. I’ve been doing this recently, just to get a bit of early Sunday morning exercise on days that would otherwise be rather sedentary.

There’s a 2km run for juniors that takes place at the same time, starting and finishing on the running track. This clearly appeals to the little ones, and care is needed to avoid trampling them underfoot before they turn around after 1km.

We ran together, taking a leisurely 26,30 on Sue’s first and my sixth participation in this event, which is smaller than the Saturday parkrun, with just 68 taking part today, compared with 414 parkrunners on Saturday.

It takes place at Wythenshawe Park’s athletics track every Sunday morning at 9 o’clock. Details are and and . 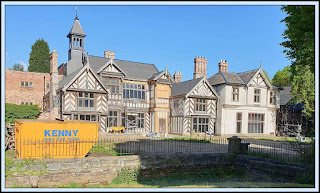 Back, briefly, to our Timperley routine. This means a visit to Wythenshawe park at 9 am on a Saturday morning.

It’s over three years since the Hall was damaged by fire. Work is progressing and much of the scaffolding has now gone. It’s a long job though. 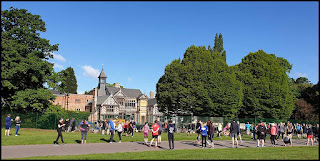 It wasn’t a hot day, but just about warm enough to mill around for a while and listen to Andy’s briefing. A record number of 414 runners and walkers turned out for today’s run, exactly 100 events after the previous record of 403. A large contingent from Glossop contributed to this record. 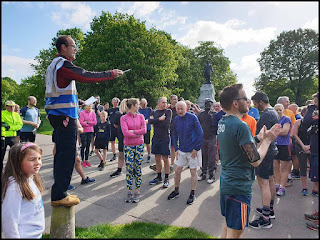 Sue and I ran the 5 km in acceptable times, given our recent lack of running. Sue actually came first out of 23 in her age category, so her time was perhaps better than ‘acceptable’. I went back along the course to meet ‘Team Owen’, featuring Jan and Ron and pictured below together with an item – a rather large post – that has appeared on the route – an obstacle that Andy, conscious always of the health and safety of the runners, was at pains to describe in his briefing. 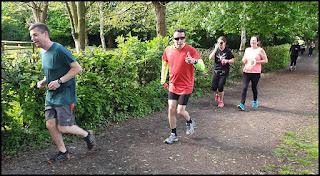 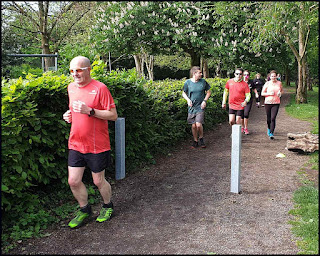 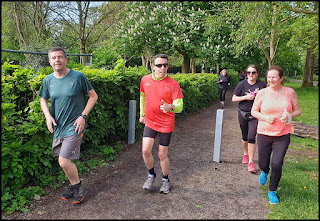 Warm (ish) and sunny weather offered a chance to enjoy our post run coffees outside the Courtyard Tea Room, on another very sociable occasion. 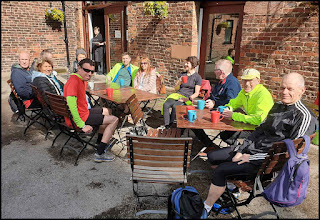