The BlackBerry Curve 8320 Smartphone – A Review 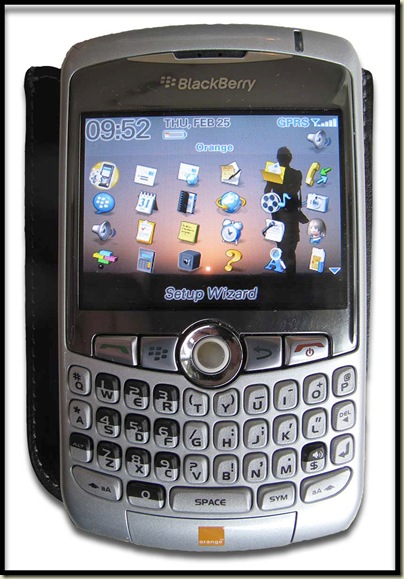 I have now been using this piece of kit for blogging whilst away on trips for nearly two years.  I reckon I’ve spent about four months of that time using it to send blog postings whilst on the move.

This won’t however be a comprehensive review, as I use the phone as a phone and blogging device.  That’s all.  It has lots of other features that I don’t use, but I do of course use its camera to remotely send ‘Postcards’.

I know that both Gayle and Jamie use a BlackBerry for blogging.  Gayle’s is the same model as mine.  Their comments on this posting would be appreciated as I’m sure they are both more technically minded than me.

The phone weighs 112gm, a spare battery is 41gm, the standard BlackBerry case is 32gm, and the charger is 123gm.  That makes a total of 308gm for a trip when you need to go 5 to 6 days between charges.  I suppose you could use a ziplock bag (or other more protective case) instead of the BlackBerry pouch if you are particularly sensitive to weight issues, and some may wish to carry a second spare battery.  The charger has European and North American adapters that slip in to replace the UK plug, so no separate adaptor is necessary.

Text messages and calls operate more or less as on any other mobile phone that I’ve used, so it’s fine for that purpose.

The camera is easy to use and produces adequate results.  I have mine set on the lowest resolution so that the images (approx 100Kb) transmit fairly easily.

I don’t use the phone for emails other than the blog postings, maintaining just one email address on the phone.  If I want to look at my emails whilst on the move I access them through webmail.  If people want to contact me they can send a text message (or use the designated email address if they know it).

The qwerty keyboard works fine.  It is firm and responsive.  It could be cumbersome for someone with fat fingers, but having said that, my hands aren’t small.  Obviously, try before you buy.

Emailing to our blog was simple and intuitive to set up.

With minimal use with the phone left on all the time, the battery keeps the phone powered for nearly a week.  If using the phone for a few calls and for blogging, I usually get about three days out of one charge, though Gayle reckons I could get more if I turned off the Wi-Fi setting, that I don’t think I’ve ever used!  Carrying a spare battery, I’ve never really had to worry about running out of power.

I haven’t linked the phone to a computer, other than to download a few images (not related to blogging) taken when I have forgotten my camera, and that was a very simple process.

There is a massive (293 page) on-line manual.  I’ve not looked at it.  There’s also a small ‘Getting Started Guide’ – a leaflet that I find useful for basic information and to remind me what the various icons mean.

I understand there are loads of ‘apps’, but I know nothing of these, or whether any of them may be of any real practical use.

I’m sure there’s more to add to all this, which seems rather superficial, but in truth I’ve found the phone basically works fine for mobile postings.  If you want to see how we have fared with it, you could scan through our ‘Italian Border Route’ postings made in the summer of 2008.  Most of those postings have been edited only for indexing purposes and to remove the innocuous ‘BlackBerry’ footer that appears with each mobile posting.  Also some larger images with black borders have been inserted in place of the original images.  The same applies to our 2009 Alpine trip, but in this case we were staying in apartments with good mobile phone reception, so blogging was a very easy task.

I think Gayle bought her phone second hand and is on a PAYG tariff.  Mine is on an Orange ‘Dolphin 20’ contract.  This costs £17 for 75 minutes talk and 200 text messages, plus a BlackBerry charge of £6 a month for internet usage of 6Mb.  (Gayle pays £5 a month for this.)  I have rarely exceeded the 6Mb.  My normal UK bill is £25 to £30 a month.  This obviously increases when abroad, not least because of the ‘text’ charge for each posting, but it isn’t a huge cost.  For example, the additional cost I incurred during our two month Alpine trip in 2008, covering daily blog postings, regular viewing of webmail, and almost daily viewing of weather forecasting sites, was about £60 – say £1 a day.  Well worth it, I think.

Obviously there are many other phone options, and I can’t make comparisons, but I for one have found the BlackBerry Curve 8320 Smartphone a most acceptable piece of kit for posting blog entries whilst on the move.  Mine is now out of its 18 month contract, so I could have a free replacement, but I’m holding off doing that for the time being whilst everything is working fine (for my admittedly limited demands).

I hope this helps.  Feel free to comment, add your own pros and cons, or raise queries.