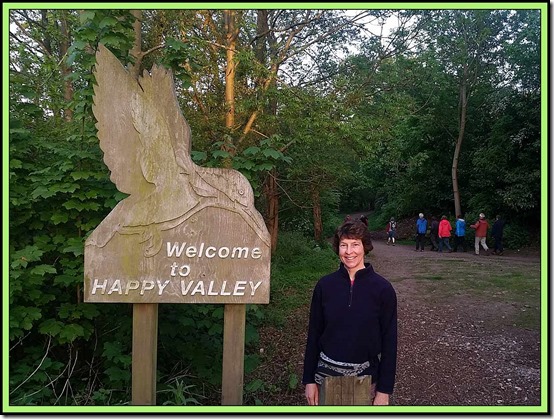 On such a nice evening Sue and I felt obliged to attend Stockport Walking & Outdoors Group’s (SWOG) evening walk to Happy Valley, which we visited on 11 April with Paul and Jeanette. It was a lot greener and completely mud free on this occasion. 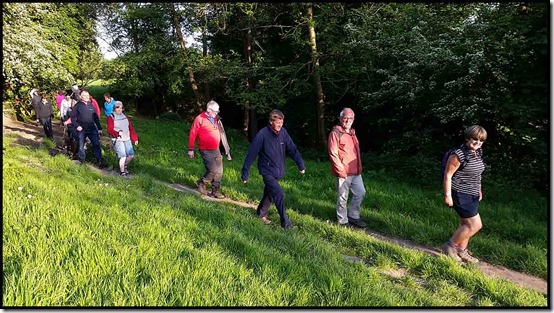 A steep path past Norbury House Farm led very quickly to the well manicured footpaths of Happy Valley Nature Reserve. Lady Brook was benign and shaded in the evening light. 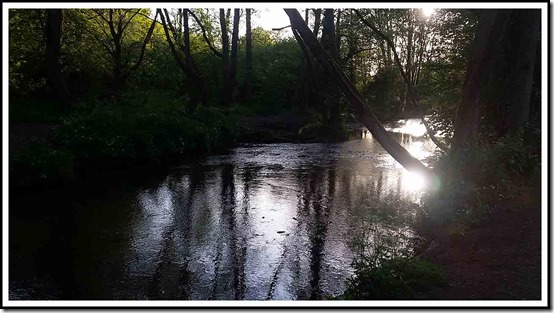 Thanks to a virtual absence of stiles, the group made good progress, though the stalwart vanguard pictured below did have to pause occasionally to allow re-grouping. It’s difficult to get 23 people to walk at the same pace; Louise did well to keep them together. 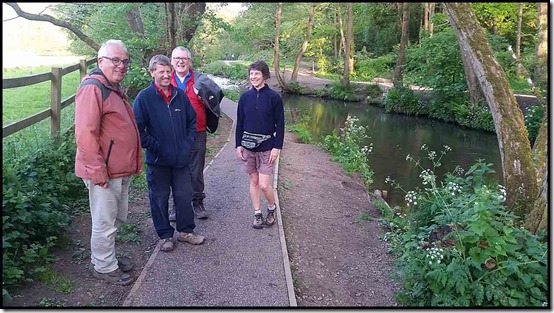 We stopped at SJ 900 859, where our path started the top of the clockwise ‘lollipop’ route (see map below). 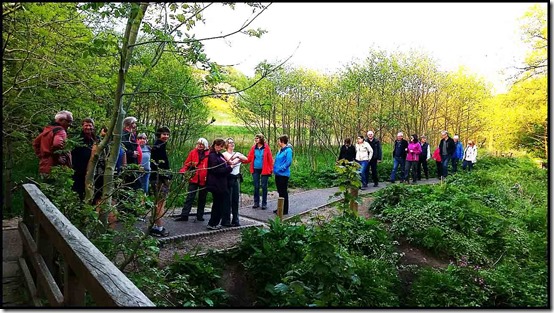 There’s a choice of several paths to Bramhall Park, tonight’s being the direct one, whereas you could choose an alternative to the south. There were some lovely Copper Beeches in the park next to the golf course. 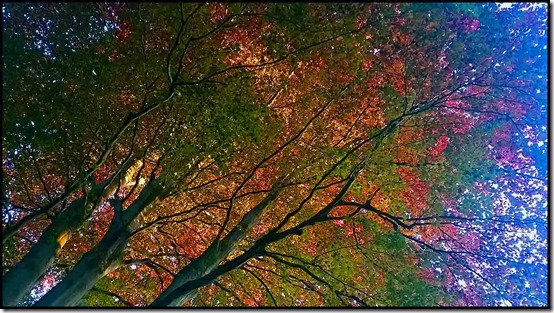 After passing an active running club training in the grounds of Bramhall Hall, we endured a short section of busy roads before re-entering the Nature Reserve at the point where Sue is shown at the head of this posting. Then past mallards and small weirs as we proceeded alongside Lady Brook, with magnificent residencies to our left, before crossing the brook at the bridge at the base of our ‘lollipop’. 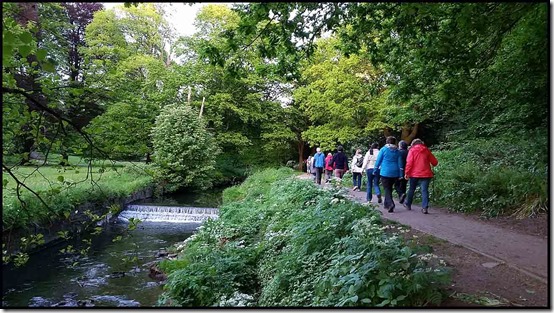 Returning along the excellent path we’d come down earlier, there were many glances back to the sunset, and up to the tree tops to vociferous thrushes. 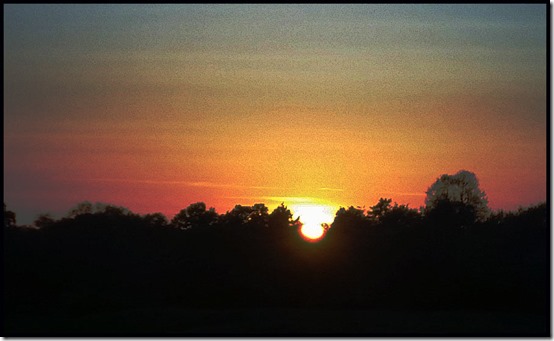 Here’s our route – 6 km with about 40 metres ascent, taking a leisurely hour and a half. 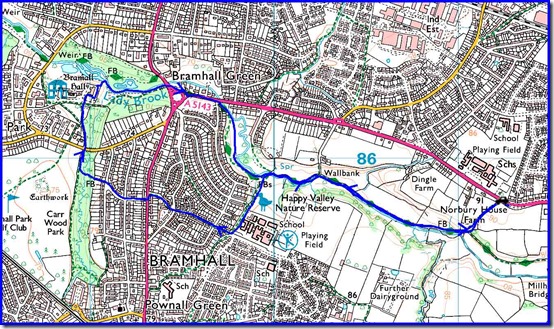 A lovely outing on excellent paths. 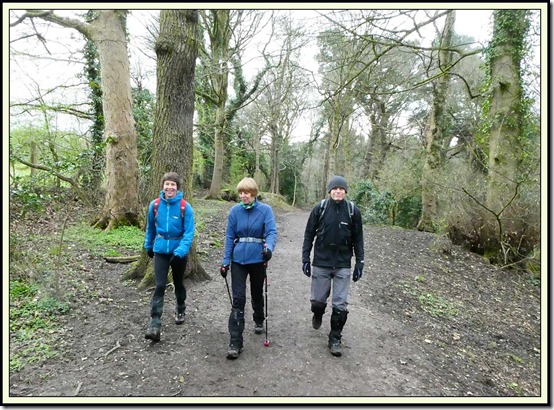 After our Cheadle circuit last November, Paul and Jeanette suggested that we should continue on the same theme with a circuit from Bramhall to Poynton and back. So I slotted this slightly longer than usual ‘Short Morning Walk’ into the programme.

A long list of excuses – family matters, dentist, Etihad blues, LEJOG (2), etc left us with a select group of four for this pleasant stroll in rather cooler weather than we would have preferred. At least there was no rain, but compared with the bright autumn colours of our November excursion, today’s light was very flat on a cool grey day.

After striding off through Bramhall Park, next to the golf club (top picture), we fumbled our way down a muddy path and along a muddy non-path. After correcting the navigation error we admired the daffodils and a nuthatch in a sumptuous garden and eventually emerged at some tarmac. The next attempt to leave the tarmac was foiled by locked gates at both ends of a ginnel between Plymouth Drive and Seal Road.

More tarmac led eventually to a farm near Dairyground, where nervous horses were housed in fields of mud, and a couple of displaying turkeys wandered up to us for a chat. 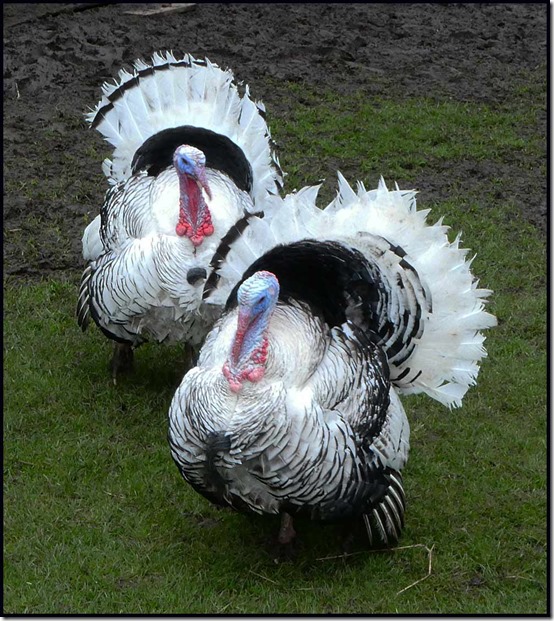 Shortly before we reached the kennels at Birch Hall the clock struck 11 and we stopped for drinks and a selection of cakes. Here we are before pressing on down the lane. 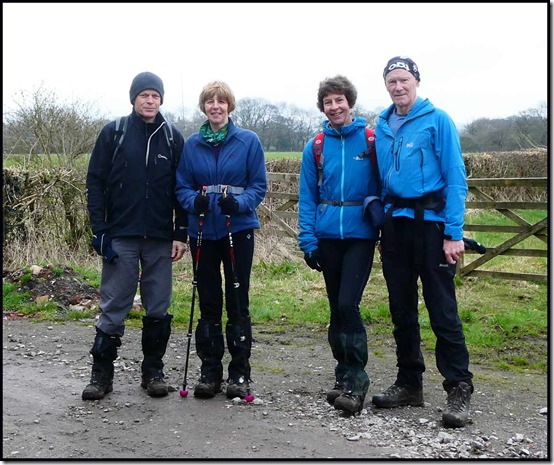 From the same spot, the Peak District looked as if it was shrouded in smog.

Soon we came upon a significant obstacle. A new road was being built. Our onward path had been obliterated. Anyway, an alternative route proved satisfactory and we soon re-joined my planned entry to Poynton along the narrow traffic free lane that is Lower Park Road.

Time constraints prevented us from pushing on into the fleshpots of Poynton, so after just a few metres along the busy A523 road, we turned left alongside the southern end of Poynton Lake. Numerous Canada Geese were in residence, alongside a variety of other water fowl. 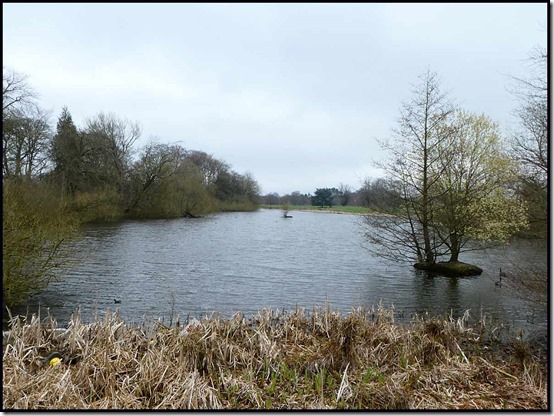 We weren’t able to take a route through Poynton Park, as the mansions of Anglesey Drive back on to the lake, blocking any exit from the park. So we wandered down this exclusive road before re-crossing the A523 and heading cross country back towards Bramhall.

Shortly before an interesting lane from the housing point of view, in Mill Hill Hollow before Millhill Bridge, we returned to the new road that had interrupted our earlier progress. Here, a pedestrian route was obvious. The current OS map shows the road as ‘Due to open Late 2017’. 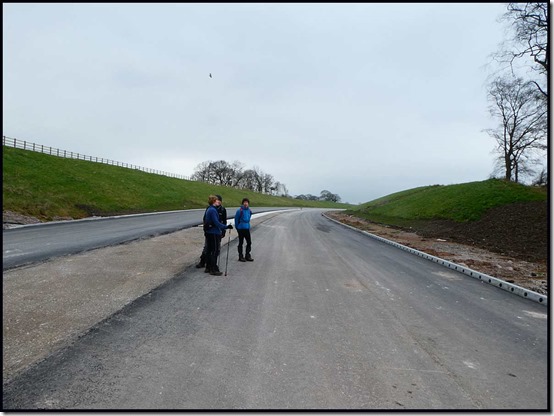 Apart from a couple of minor mud challenges, the riverside path by Lady Brook from Millhill Bridge back to Bramhall was a delight, eventually reaching the manicured surfaces of Happy Valley Nature Reserve and a bevy of dog walkers.

A second break to justify carrying provisions this far was taken shortly before we passed a series of benches.

Then we carried on through the Nature Reserve. 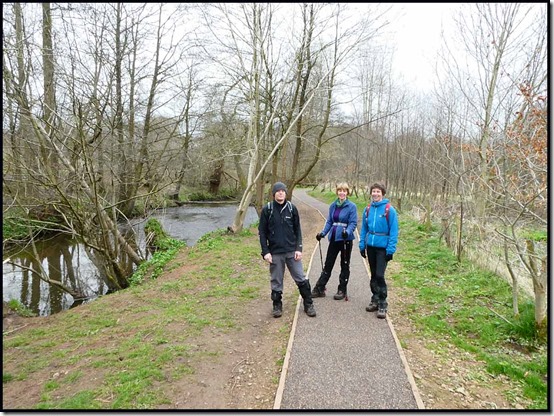 An information board disclosed that the reserve was opened in 1999 and is a haven for many types of flora and fauna. There wasn’t a lot of that on offer today, but the Lesser Celandine and Wood Anemone are both starting to come into flower. As soon as we get some warmer weather the place will rapidly become more colourful.

On exiting the Nature Reserve, we crossed a main road and entered the grounds of Bramhall Hall – Bramhall Park.

Everything here is even more manicured. 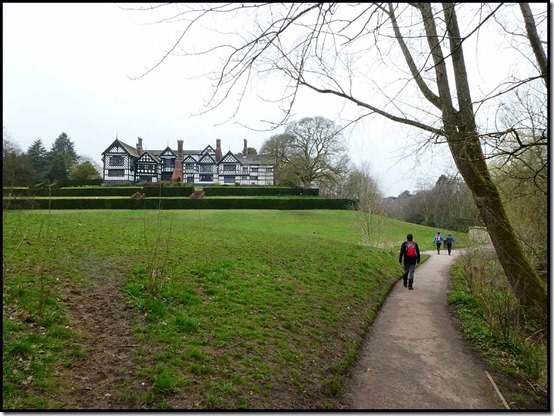 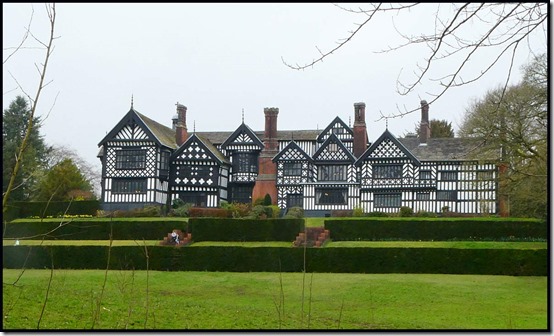 It was one o’clock, the 13.2 km stroll with minimal (about 100 metres) ascent had taken us about three hours. An excellent little outing.

Here’s the route on my old Anquet OMN Classic software. 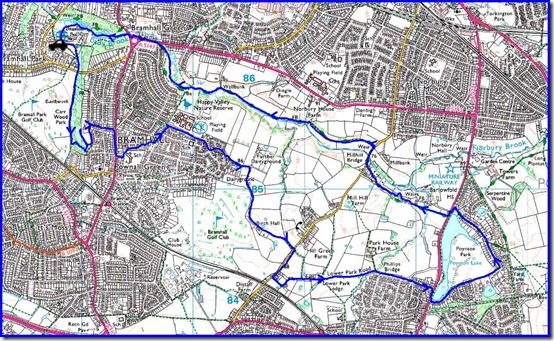 Here’s the same .GPX file using the newer OMN software that I have yet to get to grips with. The map is certainly more up to date, as the route of the new road is shown. I’m struggling with the settings options and waymarks. I think insertion of the Car Park icon has added to the length of the route for some reason. 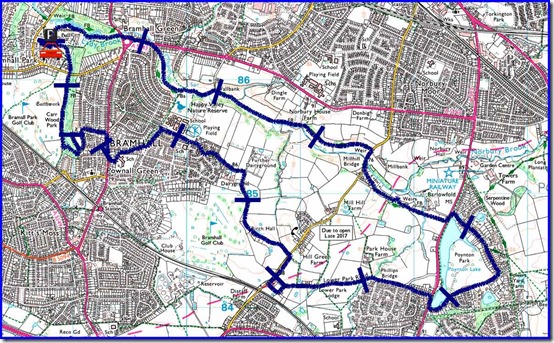