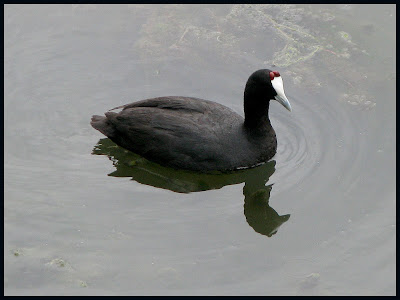 Apparently Pliny wrote about the Night Herons we saw here today being sent to Rome as a gastronomic delicacy.

These days it is such species as the Crested Coot (pictured - very similar to a common Coot, but with two red headlamps and a bluish beak) that are sent here from places like South America to set up breeding colonies in a bid to avoid extinction.

The wetlands were drained for agriculture in C19. What land was left has now been restored and turned into the Mediterranean's largest wetlands nature reserve.

Apart from the Night Herons and Crested Coots we saw quite a few of the remaining 301 different species to be found here. Presently there are numerous egrets and other herons, lots of ducks and grebes, many small waders, and small birds like the Sardinian Warbler.

Fish jump in the rivers and lakes. Ospreys and other birds of prey soar high above, no doubt awaiting suitable opportunities.

It's flat. We stayed at sea level today. For the heat...

Sent using BlackBerry® from Orange
at 17:19 No comments: Links to this post