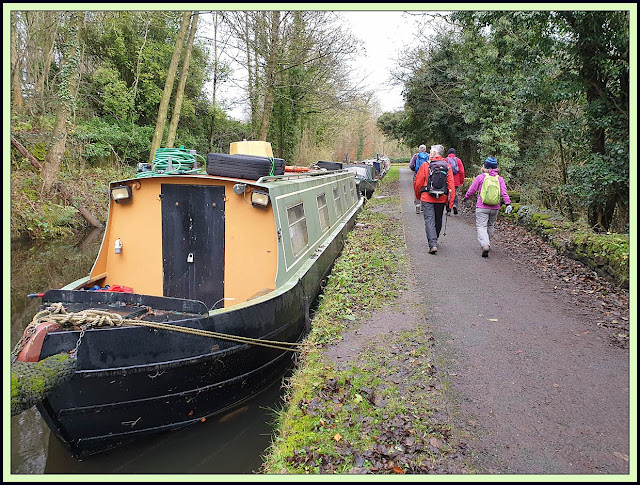 Friday morning walks returned with this outing from Whaley Bridge on a dull day, but at least the rain held off until we reached a café at the end of the walk.
I thought we'd walked this route one evening some years ago. We may have done, but I've also recorded it on 1 October 2008, .
We started along the towpath, passing Tesco before turning right over the footbridge from which the next picture was taken. 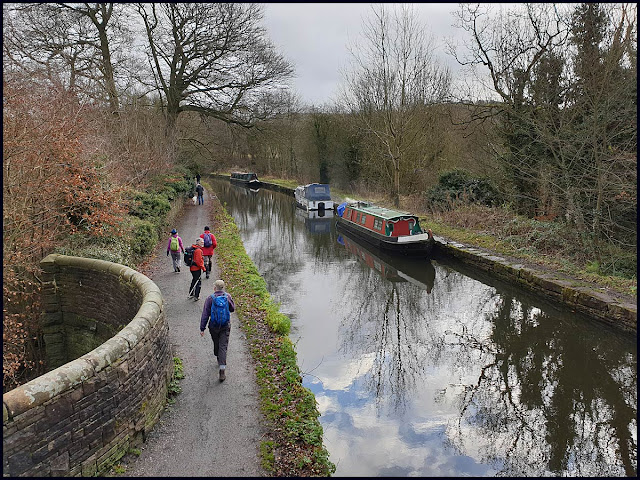 Buxworth Basin has become an industrial archaeology site, as shown by the following images. (Click on any image for a better version.) 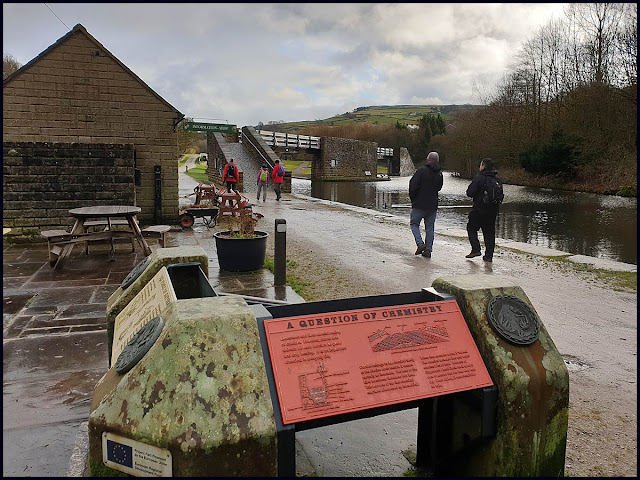 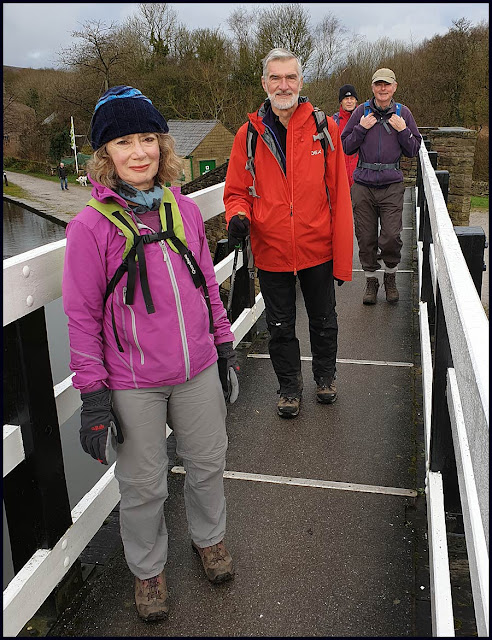 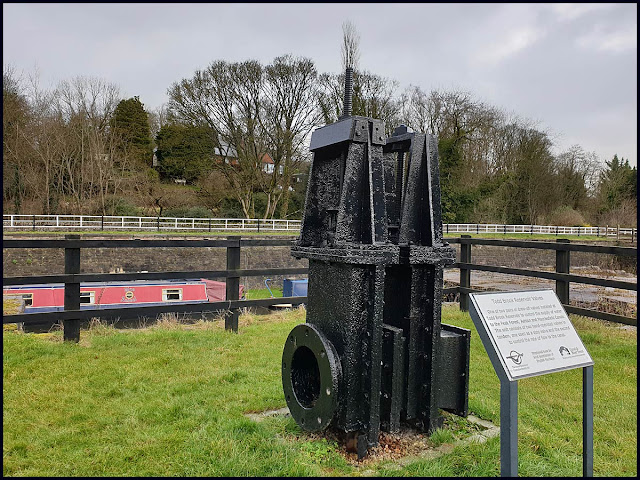 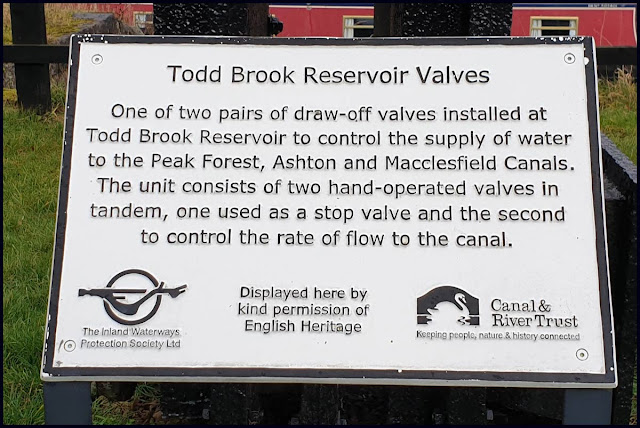 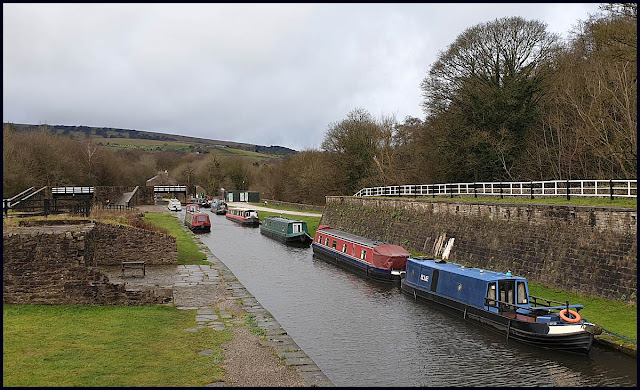 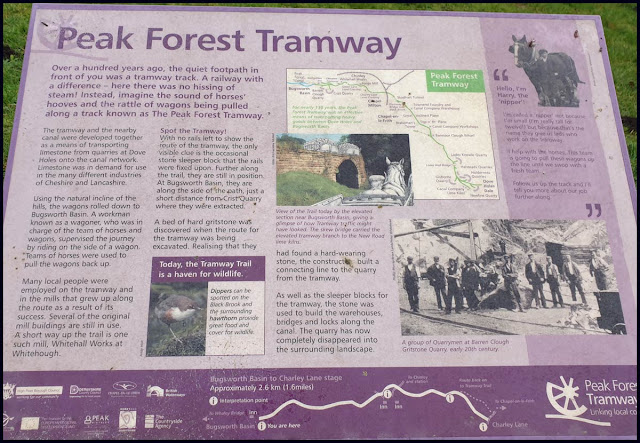 After crossing the busy bypass by a footbridge, we took one of a number of possible paths up Eccles Pike, with a pleasant view back towards Whaley Bridge.

There are good views from the summit. 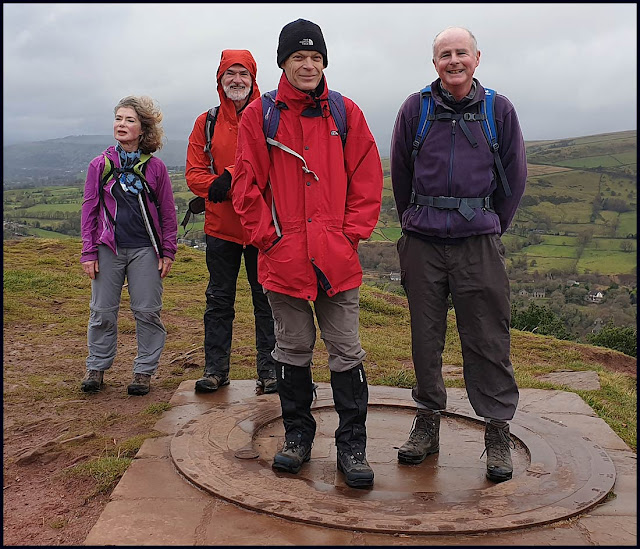 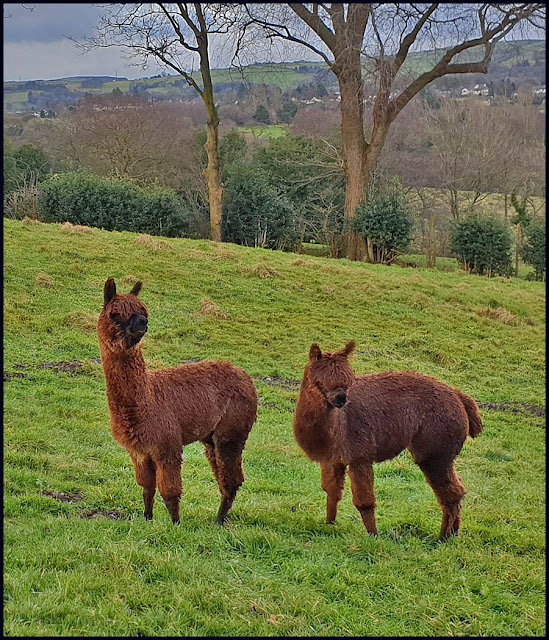 The reservoir is full, and luckily it doesn't suffer from the same problem as nearby Toddbrook Reservoir, which is currently empty due to its defective dam. 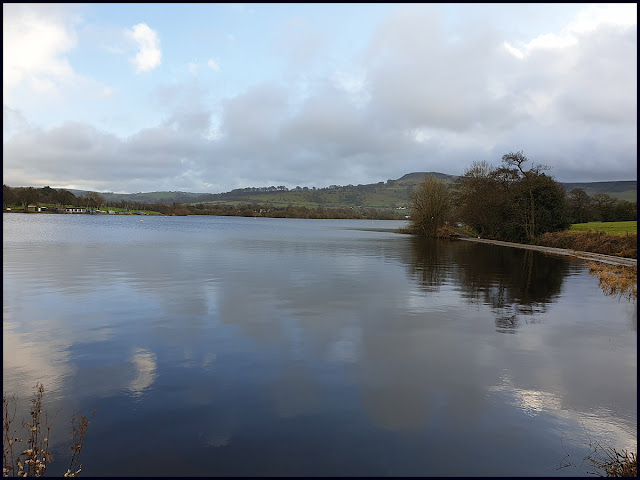 The rain held off, but judging by the nearby rainbows, it wasn't far away...

There are some lovely footpath signs around here, like this Peak & Northern Footpaths Society sign number 424 near Cadster. 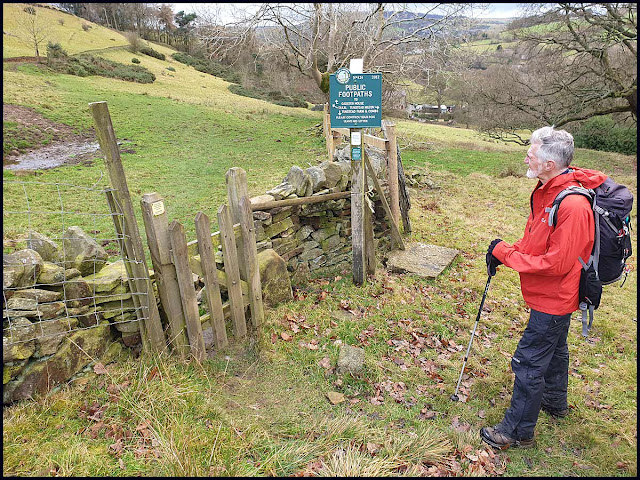 Whaley Bridge is the home of some classic cars, including a Rolls Royce on sale for £50,000. The car shown below may well have been 'luxury' in its day - as indicated by the sunroof - but it may not have been as well maintained as the Rolls. 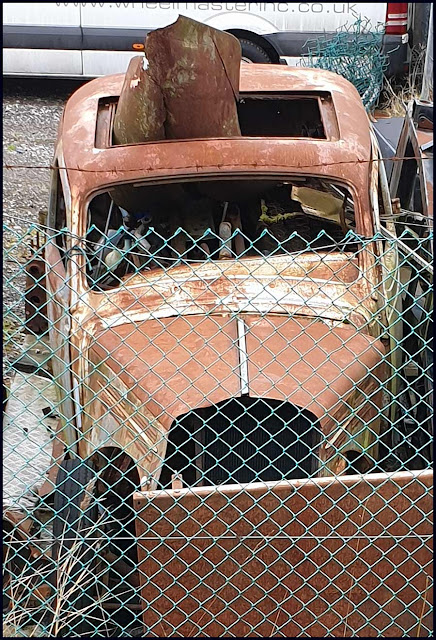 The last section of this walk follows the disused track of the Cromford and High Peak Railway Company, for whom there's a plaque that celebrates its incorporation in 1825. 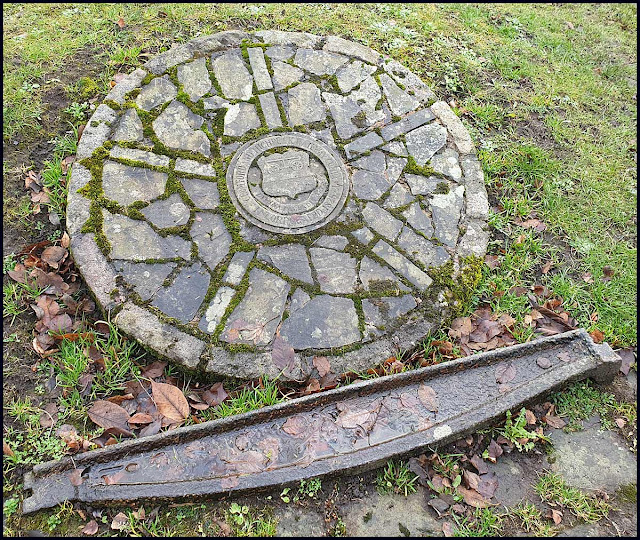 Back near Whaley Bridge station, we sat outside a café under a heated canopy, savouring coffees and some excellent mince pies, before heading off home whilst the roadside puddles were replenished from the sky.
Here's the route - 10km with about 300 metres ascent - it's easy to follow and took us two and a half hours - it's described by David Frith in his 'One Hundred Walks Around Manchester' - Route number 63. 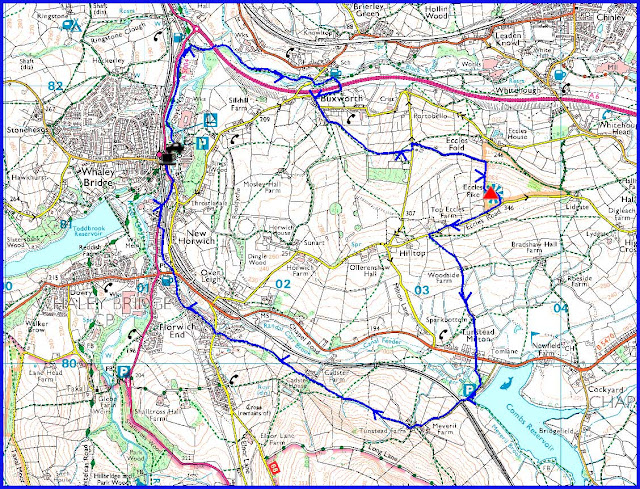 Click on any image for a higher resolution version and access to a slideshow.
Next week, all are welcome to join me on:
A 13 km walk from Heaton Park Metrolink station to Manchester, via the Irk Valley, starting at 10.45 am to allow for OAP free passes! Lunch options in Manchester, and optional walk home along the Bridgewater Canal towpath.
at 15:19 No comments: Links to this post 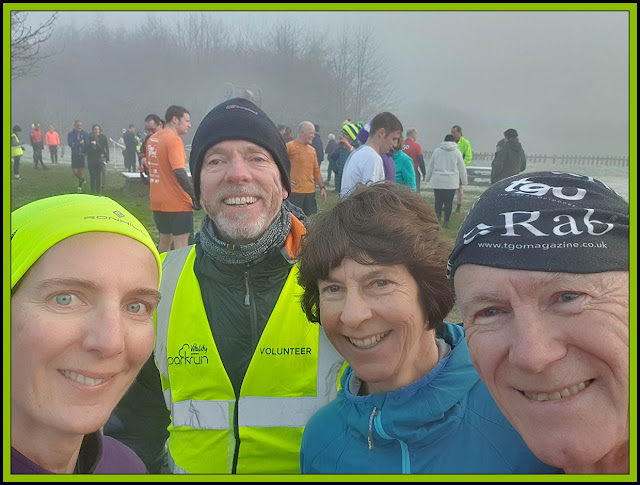 It was a lovely sunrise in Manchester, but foggy in Staffordshire and Derbyshire.
Despite a 20 minute alarm error, which left us just ten minutes to get out of the house after waking up (we managed it in 20 minutes), Sue and I got to Rosliston soon after 8.30.
This is one of Mick and Gayle's local parkrun venues, and we soon met up. They were also early, as Mick was volunteering and the Health and Safety regime here has a volunteers' briefing at 8.30.
Gayle is a 'selfie' expert, and took the above picture after the run, and after we had collected Mick from his marshalling corner just before their very own Deep Muddy Passage. Luckily, as the course is a convoluted one of just one lap, you only have to go through this once, though there are several other less muddy sections.
Today it was also icy in places. Sue and I took trainers; trail shoes like my Salomon Speed Cross shoes would have been better.
Whilst I diced with a South Derbyshire Road Runner, Gayle and Sue had a chatty time, with Gayle just moving ahead in the final sprint to the finish. 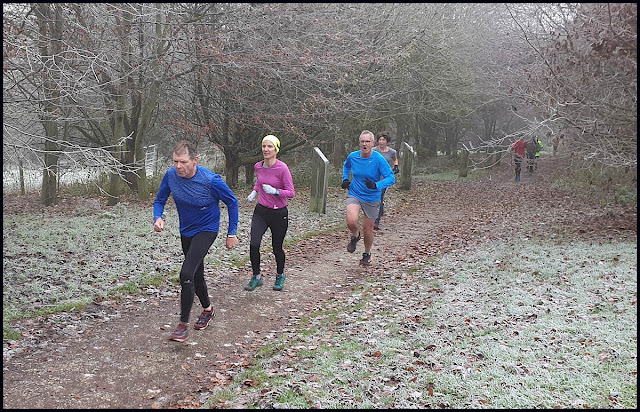 The 'sprint' is uphill, so today's picture of Sue near the finish wasn't as blurred as usual! 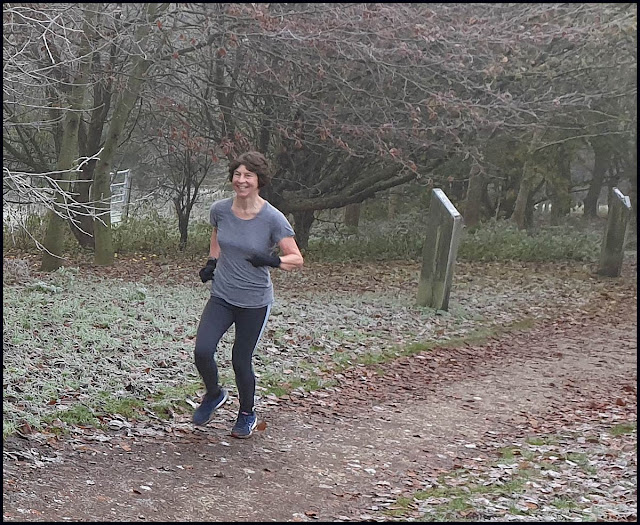 They weren't actually that slow, both coming in third in their respective age groups.
Unlike last week's café at Alexandra Park, which steadfastly stayed closed until 10 am, The Hub Café here was open for coffee and cake and was warm and comfy inside. A good venue. 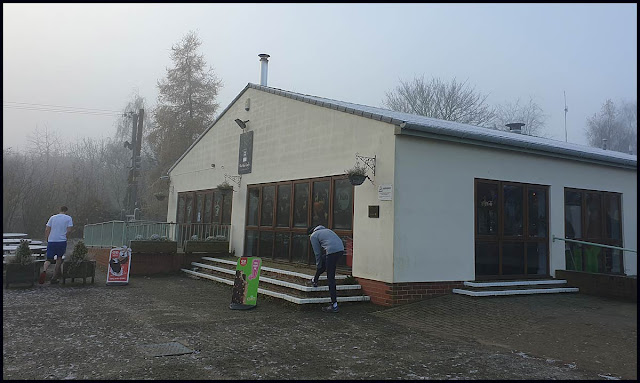 Looking out from the café, runners were still arriving home on the frosty morning, albeit completely windless, so not feeling too cold. 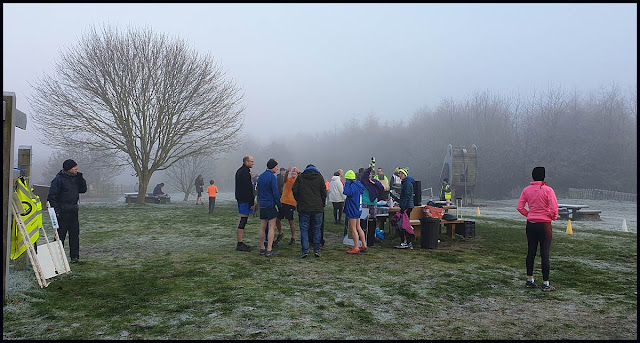 After a pleasant hour in the café catching up with Gayle and Mick, Sue and I continued to a family gathering in Hinckley, where a furry friend, Jasper, joined the party - seen below, replete from scouring the room for accidental droppings from our lavish lunch. Many thanks to the cook(s), it was a lovely meal. 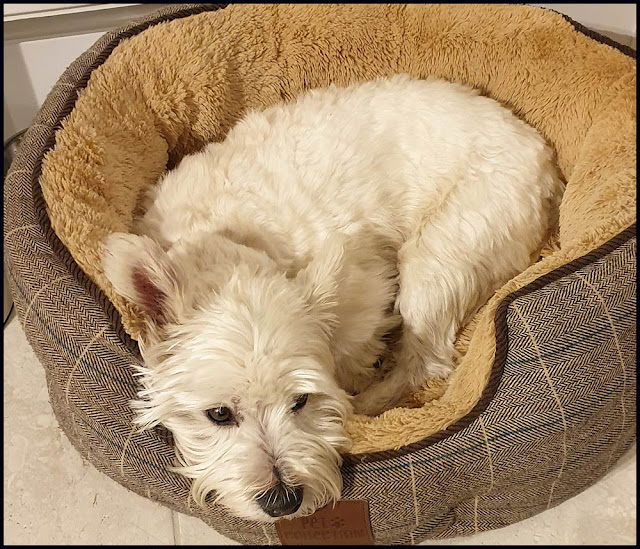