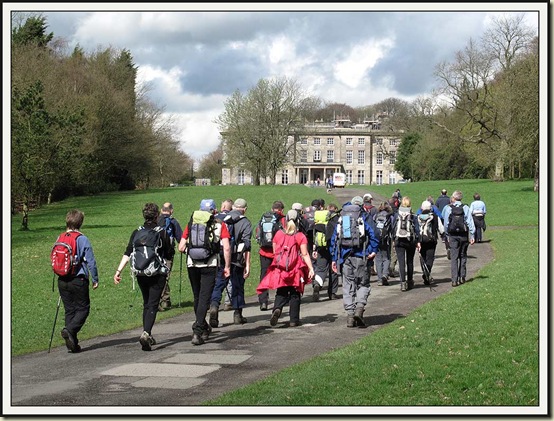 This walk appeared to be taking place one day earlier than it actually took place, according to the LDWA publicity machine, but somebody got confused and some folk thought it was today.  So they arranged a walk on both days.

To further confuse the punters, a 10 o’ clock start was brought forward to 9.30, but only half those who had shown interest were told!

The moral of this story is that you should perhaps endeavour to arrive either a day late or 30 minutes early, for an LDWA walk!  In this case both.

After much milling around in the car park at Haigh Hall, an officious looking chap calling himself ‘R Norman’ gave a quick lecture to which nobody paid any attention, then scurried off in the direction of the Leeds & Liverpool Canal.

He failed to escape, and 28 innocent souls followed him along the towpath then up past Winstanleys to the lavish estate of Bawk House. 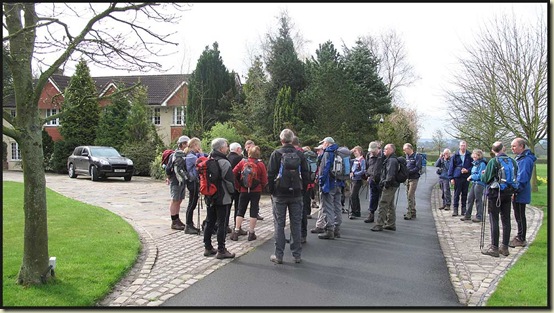 “You’ll need over £3 million for this” announced our leader, giving the impression that he was a salesman from Savills.

Back on the towpath, there were some great reflections to admire on the glassy surface of the canal, despite the overcast day. 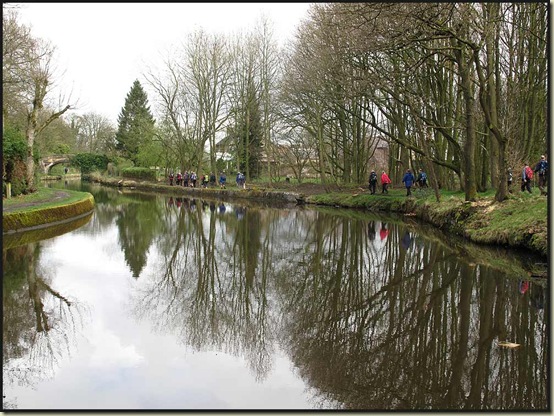 Wigan Golf Club, with its ancient Club House, was soon behind us, and after dodging through a slippery woodland dell we emerged at the end of a lake.  R Norman (55) announced that we were at ‘Worthington Lakes’, though only one lake seemed to be visible, and he went on to explain about the history of the place.  I suspect this was the home of a giant waterwheel. 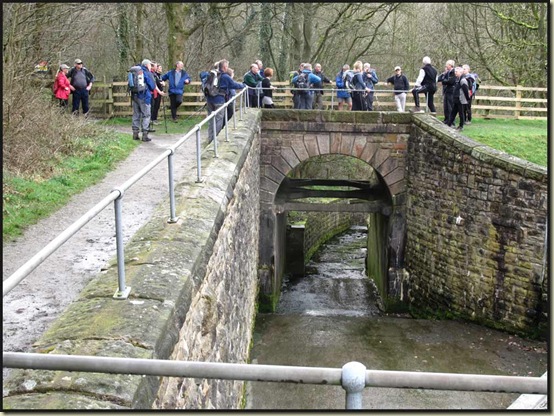 We proceeded along the side of the main lake, which is actually a reservoir built following the unlikely but true event of a population explosion in Wigan in the mid 1800s!

Wisely deciding to by-pass the fleshpots of Standish, Norman’s route led us back past a pause for elevenses (with extras) to the canal towpath for a chatty section with few photos, before crossing bridge number 60 to regain the confines of Haigh Country Park.

There was a burst of pace (see header image) which I thought was a rush for the ice cream van, but I was duly reprimanded for buying an ice cream and delaying progress towards the much needed Public Conveniences.

Haigh Hall is impressive.  Previously the home of the Earls of Crawford and Balcarres, it’s a listed building dating back to 1850. 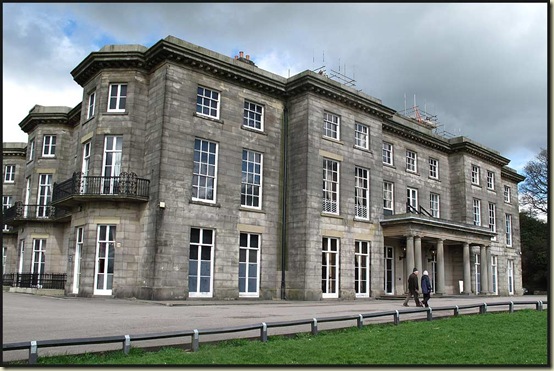 We headed past budding trees and rampant daffodils to the ‘servants quarters’, a rather pleasant stables courtyard equipped with luncheon benches. 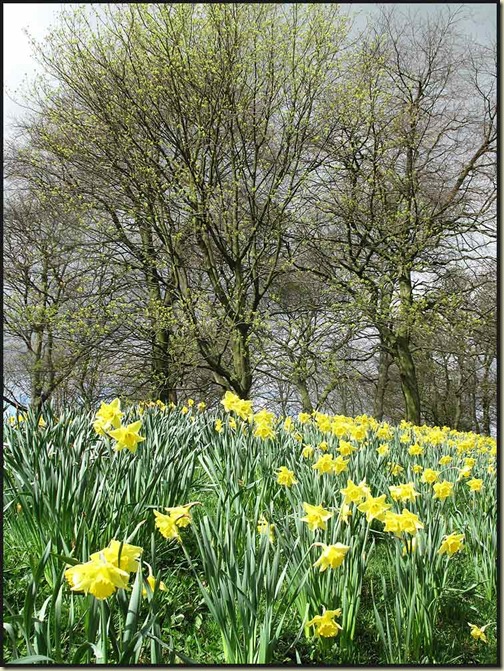 “Can I serve you, Ladies and Gentleman” announced the waiter, none other than the ubiquitous ‘R Norman’. 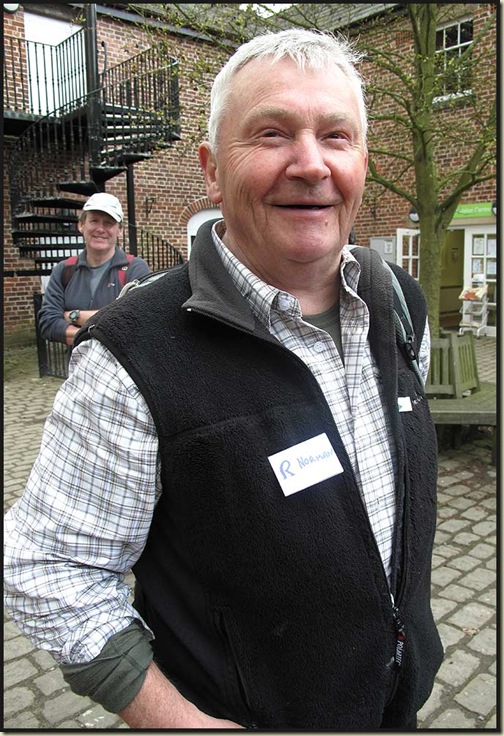 Sadly, the flesh may have been willing, but his tray was empty, so we made do with cheese sandwiches and JJ’s excellent cake, produced exclusively for the strong contingent of Timperley Trotters & Tipplers who attended this event.

A light shower dampened the early afternoon, when we set off again, past a sign indicating that only ‘AA’ members were permitted entry, to have a look at Haigh Windmill.  It’s currently (fairly obviously, I know!) being restored, having been built in 1845 to pump water from two ponds to the reservoir at Haigh Brewery, higher up the hill. 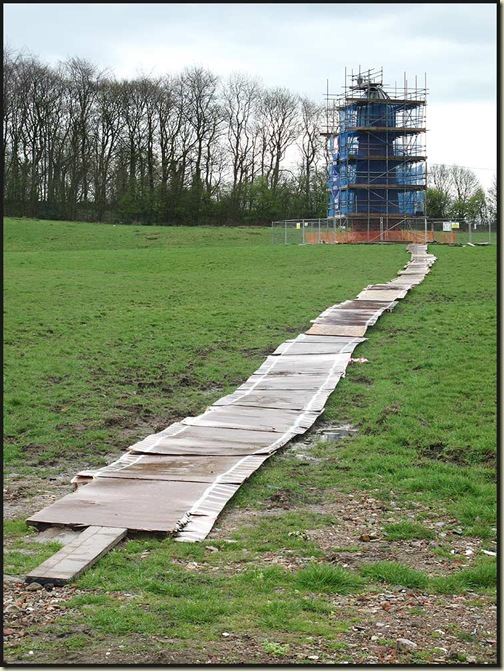 The brewery was a large one, in extensive grounds behind the Balcarres Arms.  It’s gone now.  A potted history of Haigh can be found here.

R Norman nipped in for a quick one whilst waiting for stragglers.  “I’ve been talking too much” he was heard to explain, “I need to lubricate my voice.” 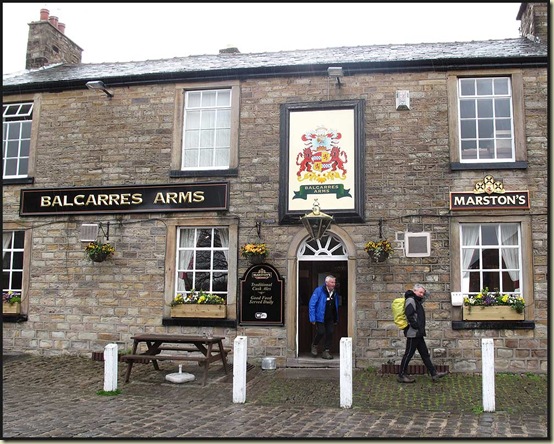 Beyond the village of Haigh, our path led through pleasant countryside and farmland, eventually arriving at the long dismantled trackbed of a railway that linked the Bolton to Preston line with that between Manchester and Wigan.  On the way we passed a chicken farm, where apparently some 26,000 chickens roam around to their hearts content.  I don’t envy the auditor who has to do a stock check!  Some llamas, bred here for their wool, were in evidence at the same farm.

Norman has (apparently) walked this route before, but he was aided on this occasion by temporary signs placed in honour of his bad record for remembering routes (or so I was told). 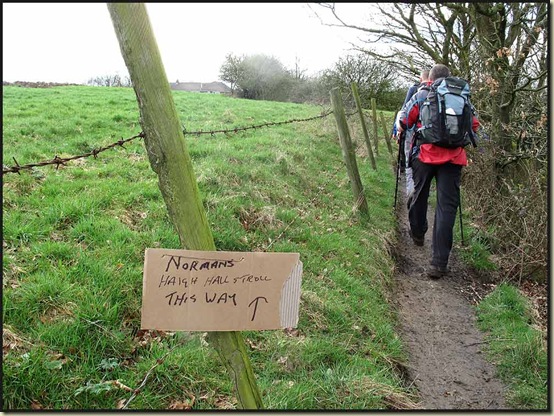 The path through Borsdane Wood was delightful.  It was just like being in Cheshire and caused several of the Timperley Trotters and Tipplers to be overcome by a bout of homesickness. 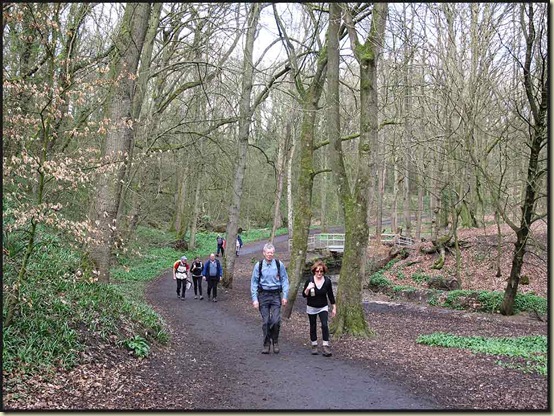 These woods are a haven for Bluebells in a month or two, but at present they are garlanded with swathes of Wood Anemone (Anemone nemorosa). 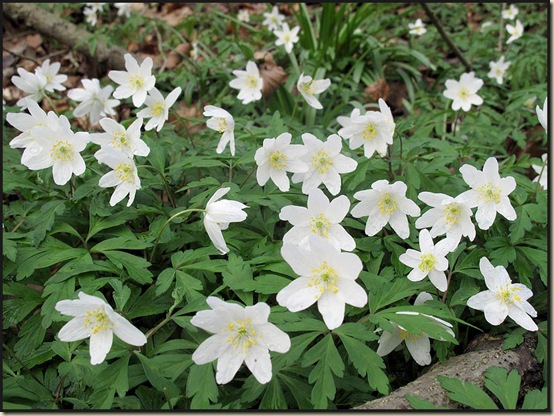 Beyond the woods another golf course was encountered at Hindley Hall, and we managed to find a bench long enough for almost the entire party to sit side by side. From this final ‘brew stop’ (my flask was already empty, unfortunately – I’m not used to so many rest stops on an LDWA walk!) it was an easy stroll back to Haigh Hall.

A sign was passed, by a locked gate, stating:

LOCK THE GATE
IF YOU CAN’T BE ARSED
DON’T WORRY
AN EIGHTY YEAR OLD
MAN WILL WALK
DOWN TO DO IT FOR
YOU!

Nothing about getting his wife to do it, then?

There seems to be a penchant for miniature horses around here.  Some of them were quite cute. 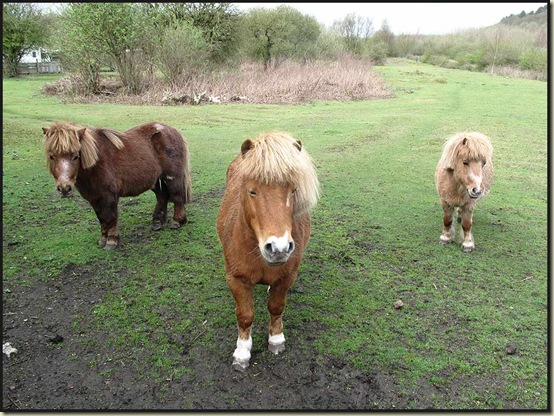 Eventually we returned to the confines of Haigh Country Park, where R Norman held a final audience, pointing out the site of the glass houses he used to visit as a child in the 1960s.  They’ve long gone, and to see where they once stood you’ll have to view the slide show for today’s ramble – 50 images – here.

Just as we got back to the hall, after a day of sunshine and showers, with a bit of overcastness, the sky briefly cleared and the sun came out. 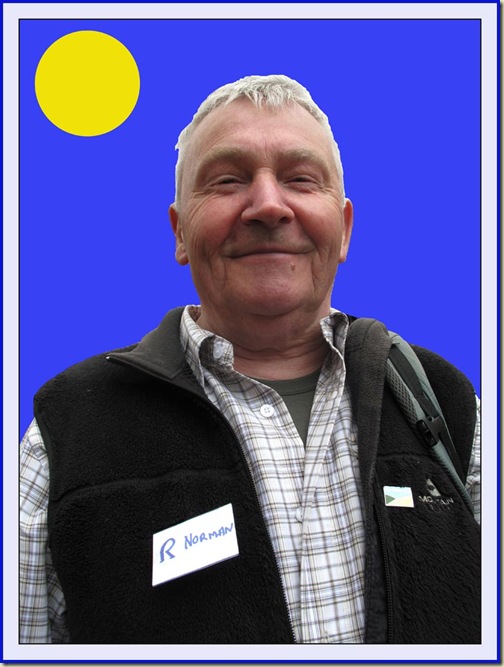 Here’s our route for the day - the northern circuit in the morning and the southern circuit after lunch - 24 km, 350 metres ascent, taking around 6 hours including breaks. 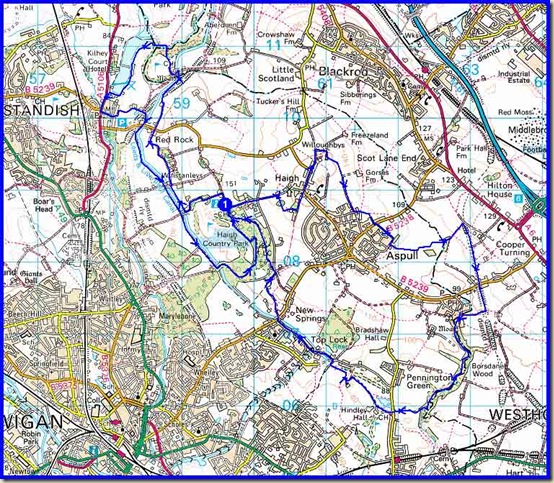 All very enjoyable.  Thank you Norman, other members of East Lancs LDWA, Bury Ramblers, Timperley Tipplers, etc, for a lovely day out, and please accept my apologies in advance for any minor factual inaccuracies that may have slipped in to the above posting.

The ‘official report’ on this walk is here.  (The second entry down the page.)