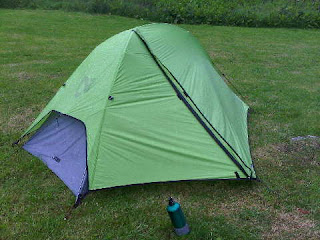 After a still night, light rain started shortly before the tent came down. It rained all day, so the phone was stashed after snapping Obi (above - pitched better than it looks!).

Thanks for your comments, Alan and Gibson. The media card is working again - I must have knocked it when changing the battery. Good to hear from you Norma, and Gibson - you will be pleased that we've seen off some of this summer's wet weather before you venture in this direction.

After seeing a dozen or so folk on the fells on Tuesday, and a crocodile of over a hundred on the C2C path yesterday, I saw just two other walkers today, ascending steeply into the mist on my last hill of the day, Great Howe. Before that I'd spent some time extricating myself from the environs of Shap, which is a very long village surrounded by an intricate network of footpaths.

Wet Sleddale had lived up to its name as I rose up to the (sadly locked) Lunch House, where signs indicated that I was welcome so long as I used the footpaths. There were no footpaths so far as I could see. Which was only a few metres, so the footpath police would have struggled to see me breaking the rules. At least the sign wasn't as threatening as the one in Patterdale threatening to shoot dogs, and do untold damage to cyclists bold enough to venture onto a particular footpath. Not all farmers are uncaring though - on yesterday's approach to Shap we found a bucket of cold drinks and a large slab of ice, courtesy of the local friendly farmer. Good value for a pound, but where were the ice creams?

Anyway, today's soaking wet walk involved intricate navigation through deep bogs and over peat hags, eventually reaching the stupendous summit of Sleddale Pike. Well, it may have been stupendous if you could have seen much. I was soon on a roll and the mighty peaks of Wasdale Pike, Great Saddle Crag, Harrop Pike and Grey Crag all saw my soggy boot prints before the final descent from Great Howe and the long but satisfying walk along footpaths and bridleways to Burneside from Sadgill.

A quick train journey to Silverdale followed, for the next action packed episode, for which you'll have to wait as there's not time at present to do stuff and write very much.

Hiya Gayle - good to hear from you, and yes the cuckoos have been in good voice in the Lakes this week. 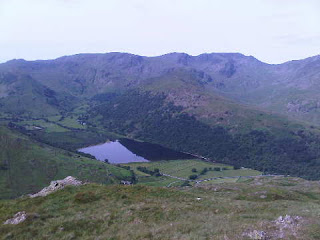 Another fine day's walk in lovely sunny weather, over Angletarn Pikes, Brock Crags, Rest Dodd, The Knott, Rampsgill Head and Kidsty Pike, some of which Andrew and Gary (aka Cramp + Blister - and that's just Andrew) also ventured up.

I rejoined their less vertiginous route after this little bout of summiteering, for lunch in the sun by Haweswater, which appeared to have been invaded by Canada geese.

A gentle walk to Shap followed. I'm camping at A+G's B+B, which happens to be at the opposite end of town to our chosen eatery, the Greyhound. There we encountered John K - a TGO Challenger who is leading a HF (Holiday Fellowship) group along the C2C route. If his better half, Norma, is watching - 'Hello, we hope you are continuing to recover from your back op'.

Sadly the phone's media card seems to have suffered a 'fatal error' so today's image is one of Brothers Water from Brock Crags, saved to the phone by some fluke this morning.
.
Sent using BlackBerry® from Orange
at 23:01 3 comments: Links to this post 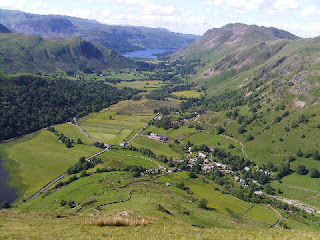 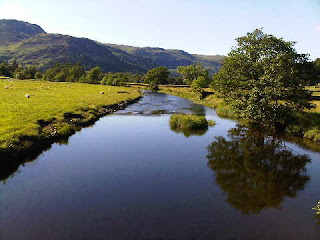 At last, a 'proper' backpack, but as Sue is at work I've been on my own today.

The Trans-Pennine Express and a local train delivered me efficiently to Staveley by 9.30, from where I enjoyed a delightful stroll north to Patterdale, via Sallows, Yoke, Ill Bell, Froswick, Thornthwaite Beacon, Stony Cove Pike, John Bell's Banner, and Hartsop Dodd.

I'd planned a wild camp, but the attraction of a beer in the White Lion and a flat 'pitch' on a lawn won the day.

Whilst there was evidence of showery weather as I travelled north, the sun shone as I set off from Staveley on the gentle - until the final kilometre - ascent of Sallows, the first of today's eight 'high points according to Bill' (Birkett).

My walk continued fairly joyously in lovely weather, despite a heavier pack than that to which I have softened to in recent weeks. I passed above a major traffic accident in the Kirkstone area, and heard lots of cuckoos as I wandered over the remaining lumps and bumps and down to Hartsop and the fleshpots of Patterdale, for Mike and Marian's warm welcome and freshly mown lawn.

Obi 1P was soon up - not too midgy - and after dinner a stroll to the White Lion revealed my companions for tomorrow, Andrew and Gary, who are on the 'Coast to Coast' (C2C) route.

Whilst I saw a smattering of folk, they weren't close enough to act as photographic foregrounds, so today's snaps comprise mountain scenery. Each picture is different. To the connoisseur! Those chosen for this posting are the view of Hartsop and beyond from the descent of Hartsop Dodd, and Patterdale from a bridge over the river that runs past the village.

Sent using BlackBerry® from Orange
at 09:22 4 comments: Links to this post