Peebles to Moffat – it’s all over now, and Good News on the Hand front 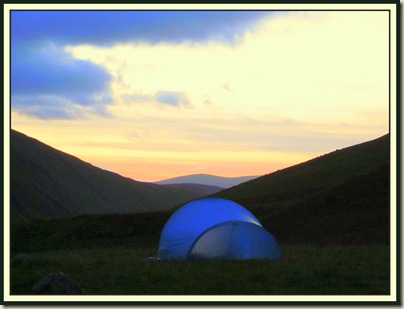 Alan’s hand will be OK.  See here for news from Peewiglet (Shirley) on that front.  You’ll need to click on the individual headings.

There’s little to add to my own entries, except that most people did about 56km (35 miles) and 2200 metres of ascent over the course of the two and a half day trip.

To view my postings click here and scroll to the bottom of the postings to start at the earliest entries….but first:

Some code names have been used that may puzzle those unfamiliar with W E Bowman’s account of ‘The Ascent of Rum Doodle’ – a fictional account of the ascent of a mountain higher than Everest.

‘Binder’ – already used by Alan Sloman over on his blog, is the leader (a figure of fun)
’Jungle’ – Peewiglet already has this nickname – is the route finder (who is always lost)
’Prone’ is the doctor (who is always ill)
’Burley’ is the crack mountaineer and strong man (who always suffers from Lassitude)
’Medical Supplies’ = champagne

A slide show of my pictures and a few of JJ’s is here.  There are none of the gory hand as photography wasn’t appropriate at the time of the accident – Shirley’s blog contains a gruesome image taken later.

I think that’s all, for now.  I’m off to replenish my first aid kit, which was totally inadequate for Alan’s injury.  Luckily, others were better equipped. 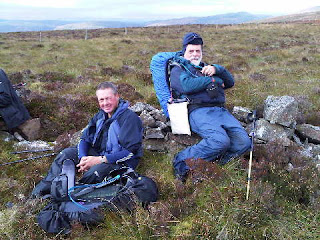 We made it to Moffat.

But not without a serious mishap.

Binder, aka Alan Sloman, unfortunately slit his hand on a handrail below Greygill Head, about 200 metres from an easy track to Moffat.

A team effort got him down as quickly as possible, and as I write (quite late) he is hopefully being attended to by experts in Carlisle.

Meanwhile, the remnants of the Pie Man's ever diminishing team enjoyed some nourishment at the Black Bull together with a Proud Scotsman. But sadly it was not the 'minor celebration' we had hoped for.

Our thoughts were with Alan, who seems to have a rather nasty injury. We hope he makes a speedy recovery.

With all except our leader, the Pope, and myself having decided against returning by foot to Peebles over the next three days, and with 'Heavy Rain' forecast for much of that time, a decision to postpone the return leg, possibly until April 2011, has been made.

The picture shows JJ and the Pie Man luxuriating in the sunshine after emerging from the cloud before the fateful descent of Greygill Head.

Our thoughts are with you, Alan.

Sent using BlackBerry® from Orange
at 00:13 13 comments: Links to this post 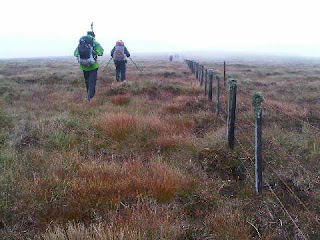 Today was spent mostly above 600 metres and as already intimated was described by our esteemed leader as 'handrailing'.

"It's an easy way of navigating, you just have to follow the wall or fence marked on the 1:25,000 map", he remarked, "the worst that can happen is that you could get impaled on the handrail."

Here, Binder is shown to be dangerously close to the handrail in a view that is typical of today's scenery.

Sent using BlackBerry® from Orange
at 23:43 No comments: Links to this post 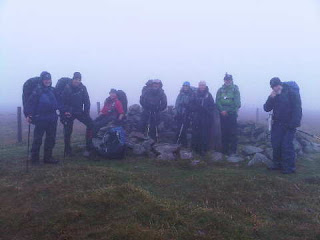 Asthma antidotes (Jungle needs Prone), and other incentives were required.

But we made it up here soon after 2pm.

Summit Lassitude has been overcome by the desire to reach Border Control at Moffat. 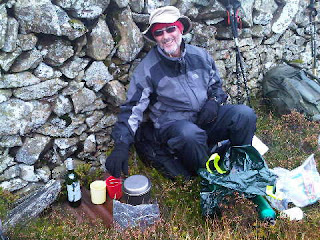 No, we are not at Alan's rear end, although that is suffering from Plumber's Lassitude.

Mr Grumpy has kindly turned up with tea and Medical Provisions.

Tormentil, scabious, bell heather, wire fences and stone walls (known to our leader as 'handrails'), luscious bogs, peat hags and occasional rocky outcrops. But only within a 50 metre circumference of our jolly band of wayfarers. That's a summary of today's view.

And doing this isn't very easy in the moist conditions. Next report will be later. Perhaps much later.

Sent using BlackBerry® from Orange
at 12:28 No comments: Links to this post 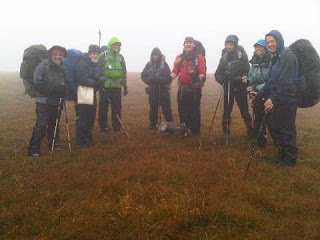 Firthhope Rig. We made it!

Sent using BlackBerry® from Orange
at 12:27 No comments: Links to this post 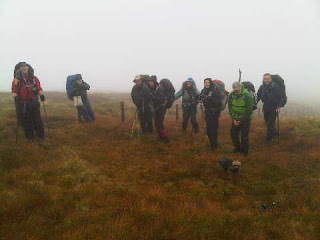 Burley (aka JJ Mk2) is to blame. And HMP3. Burley claimed a sleepless night due to much cheese and McEwans Export.

Others have their own problems.

Sent using BlackBerry® from Orange
at 09:59 No comments: Links to this post 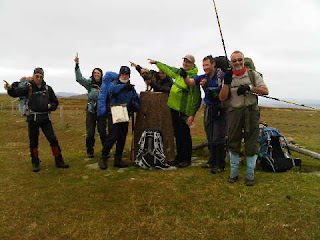 Today we tramped around 22 km (a bit more for some) in lovely late September weather, with around 900 metres of ascent, over various summits, most notably Broad Law, a Corbett (on which some junior members of the party, confused as to the direction in which we should be heading, are pictured above), to reach a cache of 'Medical Supplies', kindly provided by our inspirational leader, who goes by the name of 'Pie Man', but would more appropriately be named 'Binder-Jungle-Pong, however we already have characters with those names, and also one called 'The Pope', who admitted that his most recent backpacking trip had been in 1972.

The morning was spent on tussocks. Excepting the periods spent in bogs and the short diversion to Dun Rig taken by Jungle and Callum Hord. Our leader insisted that the way ahead would soon be paved with short grass. It wasn't. Lunch was taken in the sun. Four trail bikers briefly relieved the tension of resting in the sunshine pondering why anyone should be wishing it to rain on us. Here, JJ Mk2 was unable to contain his joy at finding a path. He set off purposefully down it, towards Tibbie Shiels Inn, in search of 'Medical Supplies'. He has a 'Bad Knee' (yes, another one).

After 9.5 hours of marching under a hot sun, including a surprisingly grassy if disconcertingly undulating afternoon, we found ourselves at NT 147 200, a less lumpy oasis well endowed with sheep s**t near the Megget Stone, which nobody visited, as fresh Medical Supplies were close at hand.

Those supplies, and hors d'oevres provided by HMP3 and Jungle were soon applied to ease the aches and pains of the day. JJ Mk2 had reappeared at said map reference and greedily tucked into the fresh supplies and a pan of 'Beef Smash'.

Then everyone had a Love In and went to sleep.

Sent using BlackBerry® from Orange
at 09:10 2 comments: Links to this post

Peebles to Moffat - Lunch in the Sun 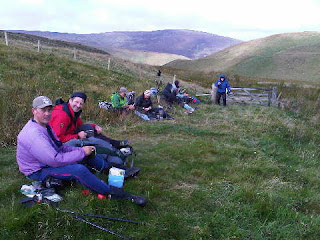 Some will be pleased to hear that it's a lovely day here in Sunny Scotland.

We've had a Wry Smile about that!

Thanks for your comments....

Sent using BlackBerry® from Orange
at 16:17 3 comments: Links to this post

Peebles to Moffat - Setting Off 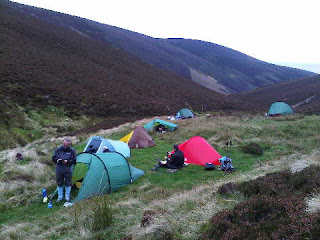 We arrived shortly before 6pm, here at NT 247 318, a small grassy oasis at 520 metres surrounded by heathery lumps. A burbling stream breaks the silence, at least when the faint sound of chatter and the breaking of wind from nearby tents subsides.

We had assembled in Moffat, and again at the Bridge Inn in Peebles. Some had arrived nearly a day early! Others were late.

Baguette heaven offered sustenance for two, before our 2pm departure.

HMP3, veteran of nine TGO Challenges, was there to wave us off, before having to return to edit his love child, Big Jugs Weekly.

A vicar turned up to bless the congregation and pour consoles over various ailing knees. This fine fellow even joined us for an hour before hugging everyone and skipping off like Eric Morecambe.

We covered around 11km in 4 hours and rose a good 450 metres before reaching this spot, where our seven tents seem to fit quite cosily on the slope. There were a few minor obstacles en route, namely the repeated crossing of the same stream. Jungle and Piglet eventually got the hang of it!

My wild camping is usually solo or with Sue, so it was strange to be in such a big group.

We all enjoyed large meals of dried provisions and medicine. Then it went dark so we settled down for a long night on the heathery lumps of Glensax.

Ho ho. What fun! There are five UK outdoors blogger amongst us - I wonder what the others are saying...

Sent using BlackBerry® from Orange
at 08:54 3 comments: Links to this post

It has been a busy week.

A South West Coast Path summary will follow in October, but in the meantime feel free to peruse a slide show.  The short one is here, but if you are called Andrew, or have more time, you may choose this one. 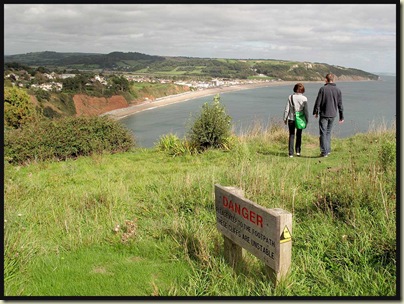 A report on the walk that Sue and I enjoyed around Woolston on 18 September will have to wait, or forever be forgotten. 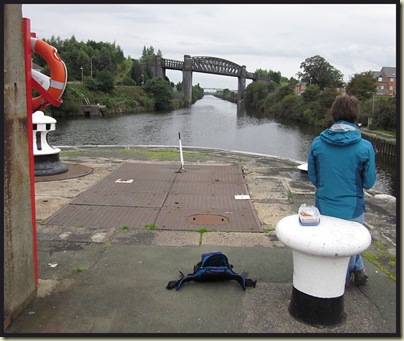 Here’s part of the reason for the busy week – repatriation of a container load (we filled the ‘van’) of possessions after around eight years – it’s like a treasure trove – but where to put them all. 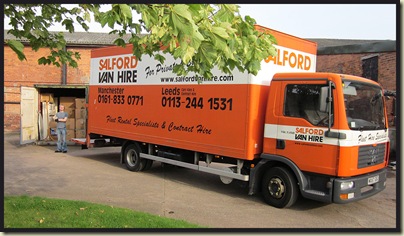 The evening walks have now become ‘night’ walks, although we were blessed with a full moon during our short perambulation around Little Budworth on 23 September. 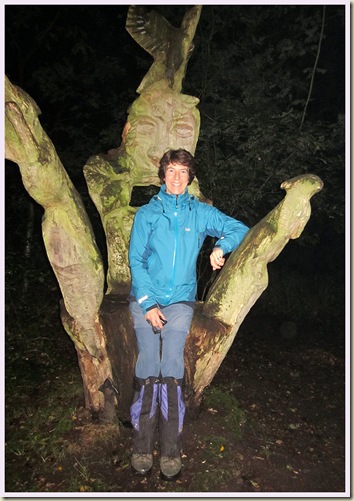 On Saturday morning (later today) a trip to Moffat/Peebles will be undertaken, and during the next six days a 130 km circular route will be attempted.  Some friends failed last time.  One of them is a fellow blogger.  ‘Earwiggo Again’ he reports, having scoured the land for reinforcements for this second attempt.  Curious as to what happened last time?  It’s described here.  And the picture below (courtesy of the Pie Man) provides a clue as to the reason for failure. 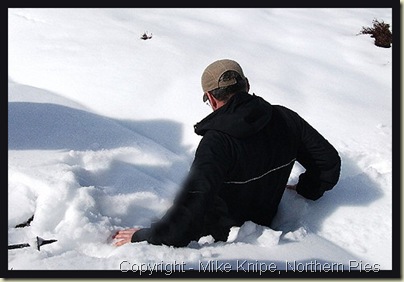