A Postcard From Rome 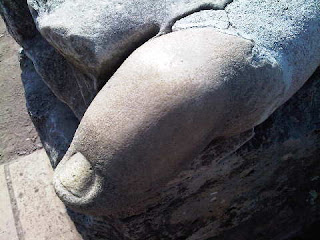 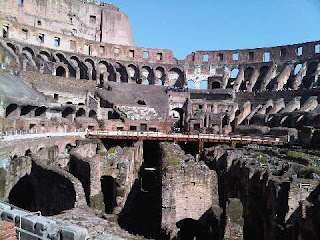 Went to a big stadium to see some racing. The red chariot won.

Then Sue decided she wanted a reminder of her sore foot, so she got an old boy to copy her big toe in stone.

Then we went to watch some more sport. The amphitheatre fitted 75,000 people. The gladiator in green and the griffon vultures won. The Bull lost, we think because it was tired from pulling the red chariot earlier.

This afternoon's earthquake was a bit of a shock. It seriously damaged the Colosseum (pictured below Sue's toe). Several tourists and around 20,000 children had to make a quick exit. The streets were full of them.

Last night we popped into Monte Carlo for a pizza, but tonight we are eating in. Beer (as you can perhaps tell) is on the menu, together with Bull fritters.

Sent using BlackBerry® from Orange
at 17:02 No comments: Links to this post 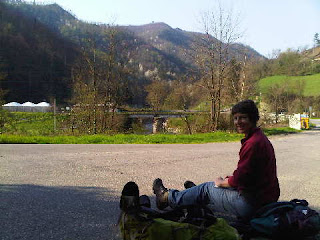 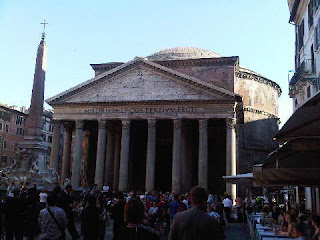 As ever, last night's hospitality was superb. At Agriturismo Ponte alla Villa, Marco and his wife Sonia, and her sister Erica, fed us with tasty home-made traditional dishes, and Marco was delighted to be able to test Sue's command of the Italian language to its limits.

It was a pleasure to see Martins and Swallows hoovering up insects outside our room, and to hear the familiar screech of a flock of Swifts for the first time this year.

Marco is a mountain biking guide and was expounding on the high quality of MTB routes in this area. He also confirmed that there should be no evidence of trial bikes on the GEA after Montepiano. Their very existence on paths anywhere seemed rightly to upset him.

Regarding paths generally. Although we were on the GEA and 00 paths, it was clear that the area has an extensive and well waymarked footpath/bridleway/MTB route network. Perhaps it is well populated with all of those later in the season. We saw an average of one walker each day, and no horses or mountain bikers at all, despite some perfect weather.

Marco confirmed that this is the first week of good weather after a prolonged wet and windy spell, as evidenced by landslips and the many branches we have seen on the trail, in bud despite being detached from their hosts.

The arrangement at the Agriturismo was typical of half board accommodation in the area - €50 per person 'all inclusive' - including wine and beer. Some places charge a bit less and you pay for beer and wine separately. A couple of large beers and a bottle of wine will usually set you back less than €10.

We often order a half litre of wine with our dinner. Hereabouts, this still results in a bottle being brought to you. You are then charged for what you drink - usually the whole bottle, the 'house' wine is very good. To our taste, anyway.

This morning's bus ride to Prato (Sue is pictured waiting at the bus stop) was simple enough, excepting the fact that we didn't have tickets, which are supposed to be bought in advance and validated on the bus. Where would we have bought a ticket though? In Montepiano? Anyway, when the buses changed over in Vernio the driver helpfully sold us tickets to Prato.

Prato is a city with an interesting centre that we explored only briefly, in between topping up with coffee and cash, and looking in vain for a shop from which to purchase the four maps needed to complete our GEA traverse at a later date.

After an hour or so on the Trieste to Rome train, we called at Arezzo, the starting point for many a GEA adventure. All that effort for an hour's journey!

The scenery that was a uniform brown when we arrived is now many shades of green. The season has completely changed in ten days.

It's lovely and sunny in Rome, where we have a homely apartment just around the corner from an architectural masterpiece (pictured) from Emperor Hadrian's era - it was finished in 125 AD.

After being on our own for so long, Rome is a complete contrast - we have to be careful not to get separated in the crowds. 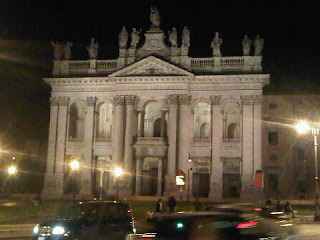 After an energetic Parkrun, and thanks to Mike's Taxi, Jet2's Boeing 737-300 and a Terravision bus, we made it in good time to Hotel Washington, near Rome's railway terminus.

A short stroll then brought us to the church of San Giovanni in Laterano (pictured), around the corner from which a cheap pizzeria was selling large bottles of beer for €3, neither of which offers we could refuse...

Sent using BlackBerry® from Orange
at 22:03 No comments: Links to this post