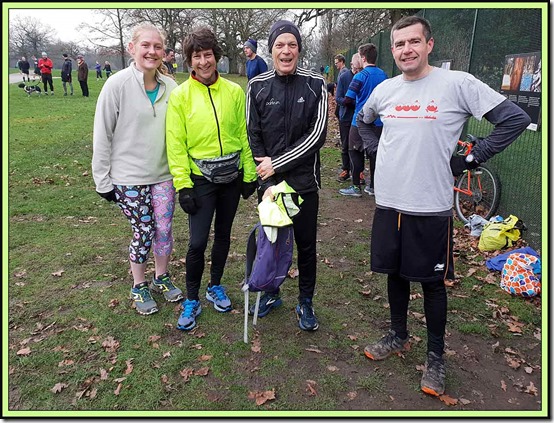 On a bitterly cold morning , just 184 runners and walkers turned up for event number 369. Jan, pictured above standing to the left of Rebekah, Sue and Paul, has participated in some 239 of those events, and today was his 250th parkrun at all venues.

Well done Jan, and well done run director Tris for reeling off a whole catalogue of Jan’s statistics. Impressively, he ran a personal best time in September, some three years after his previous PB, and on his 229th run around the Wythenshawe course.

Today a lot of us were taking it easy after Friday evening indulgencies – Sue and mine having been at our Quizzers’ Christmas Meal at Thyme and Plaice in Chorley. It was very good. Sue drove; I had the headache.

That meant Sue was raring to go in her brand new Saucony Peregrin shoes. 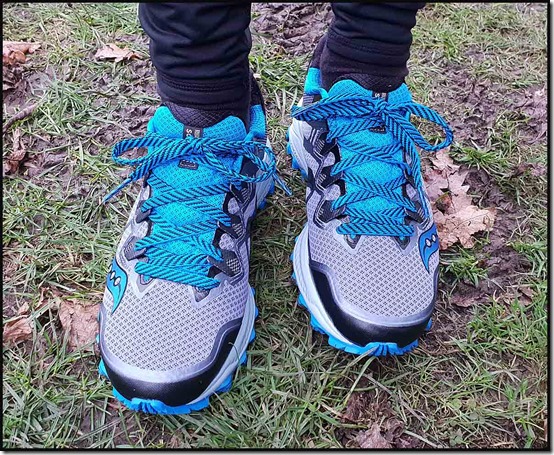 She won’t be slithering through the wet grass any more with those soles. Conditions today were dry and fast, hampered only by the cold weather and a cold wind, so Sue was pleased to run her fastest time this year. 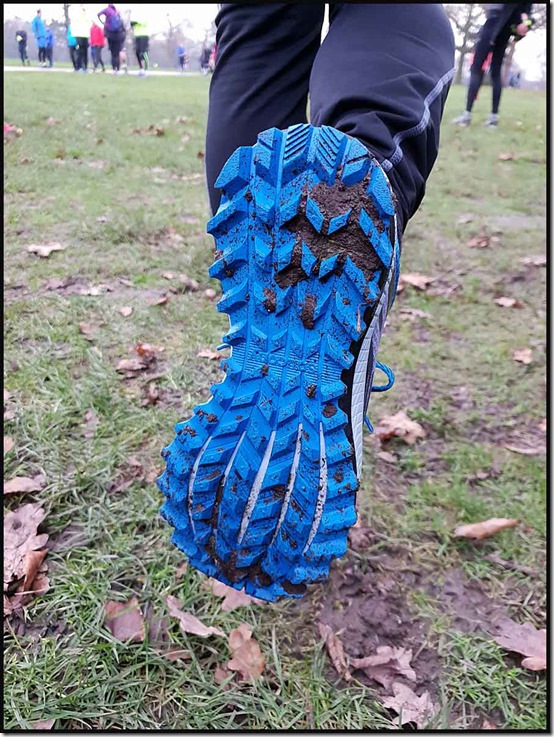 The fire damaged hall is slowly returning to life. A lot of the scaffolding has been removed. Here’s today’s view, shortly before the rain arrived. 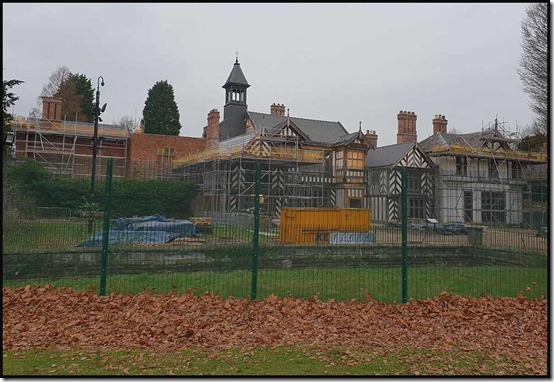 PS Thanks go to Syd for the doughnuts. Yum! 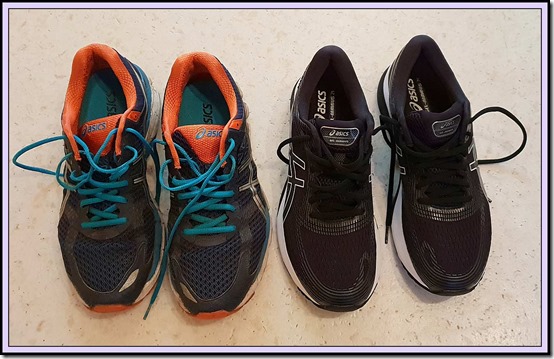 Yesterday I took the opportunity to pop in to Running Bear in Alderley Edge, thanks to their 20% off voucher in the Tatton Yule Yomp goodie bag.

My old Asics trainers have lasted well and haven't come adrift in the usual places such as the heel fabric. The soles are somewhat lacking in tread though. The shoes were duly declared ‘dead’ and have been relegated to a dark corner. My records indicate that they have done around 1100 miles, which I believe is pretty good for this type of shoe. Their predecessors lasted  to about the same mileage. So the obvious choice of replacement was a third pair of Asics shoes, this time their ‘Nimbus 9’ offering. The design does appear to have changed in the 2-3 years since my last ones were bought.

Whilst the uppers and heel and internal fabric of the old shoes are still in excellent condition, the soles have become rather worn, despite being exposed mainly to the grass of Wythenshawe Park. 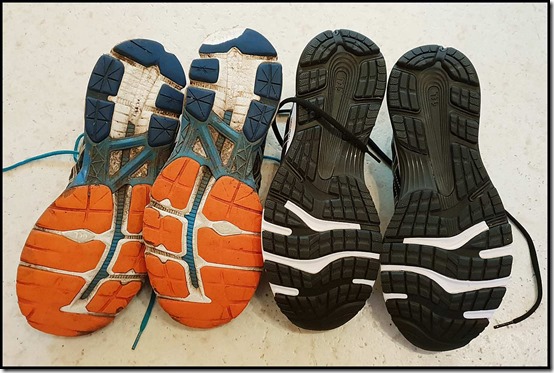 I hope the new Nimbus 9 shoes match up to their predecessors. 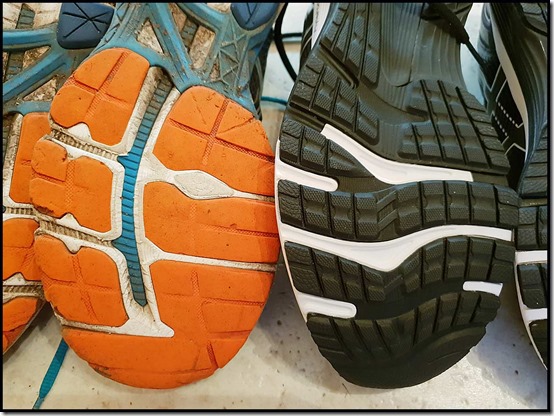 Whilst I was at it I got Sue some Saucony Peregrin shoes that have big lumps (lugs?) on the soles so that she can speed through the slippery grass of the park. I’ll picture them when she uses them – maybe on Saturday.

Out with the Old, In with the New 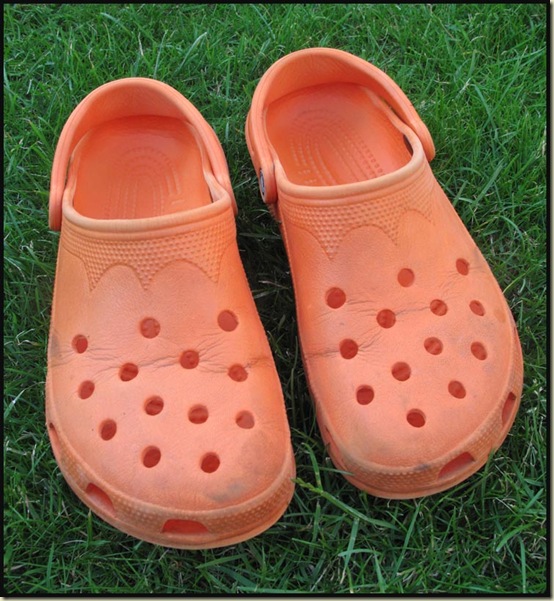 Do all good things come to an end, or does life simply move on?

Both, I suspect.  My trusty old Crocs were purchased 4½ years ago at Ottawa airport for the purpose of river crossings and evening wear whilst backpacking.  Since then they have been on five TGO Challenges and numerous other backpacking trips and holidays of all descriptions, as well as accompanying me on wet day walks when it has been handy to have spare footwear for the pub.  At 285gm they are really no trouble to carry around.

I’ve also backpacked for around 100 miles in the Crocs, an activity for which they are not ideal, especially when the sole wears down to a smooth piece of plastic (or is it rubber?).  Anyway, they slip easily in the wet, and aren’t all that secure when being used for river crossings.

So, I’ve been keeping my eyes open for a successor to the Crocs, not really expecting to find anything as light as they are.

Then Alan Rayner discovered the Hattori running shoe, from Saucony.  I investigated this minimalist piece of kit and am now the owner of a pair of running shoes that weigh just 245gm, 40gm lighter than my Crocs!

I can run in them!  They have (a bit of) cushioning, and a grippy sole, and they will be great for river crossings, evening wear and for backpacking generally, when the boots become tiresome on hot dry sections.  And I can use them for running – not that I do much of that.

I took this picture earlier and should have taken one of the grippy sole as well. 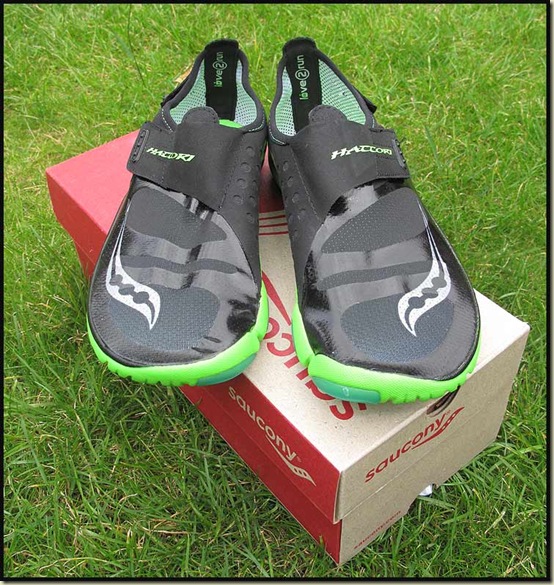 I’ll have to add the sole picture later, as the shoes are now stuffed deep inside my bag for our next trip, which starts shortly.

Meanwhile, the Crocs are not dead, they are very useful for trips into the back garden, and they do slip on rather more easily than these Hattori shoes…

Finally, I notice from Alan’s blog that Inov-8 have some lightweight shoes – 190gm is quoted – that’s excellent if it’s for a pair, but I suspect it’s per shoe, as in the case of the Hattori’s quoted 125gm.

PS You’ll note that I’ve changed the header, footer and background images to some taken on the TGO Challenge.  Poor Michael now features on the header, at a spot that many Challengers will recognise.  Not so many will be able to identify the Munro from where the footer image was taken, probably because they have never been there.  Even fewer will recognise the Munro from whose trig point the background image was taken, and in truth, it could be anywhere.  It just happens to be Meall Chuaich, early on 20 May, before the snow melted.  I hope that those of you who have your computers set to bring the background image to the foreground on your screens will appreciate my effort to provide you with a clear background/foreground for a few weeks.  If anyone is aware of this problem and knows how to sort it out, I know a couple of readers who would appreciate the sharing of your knowledge!