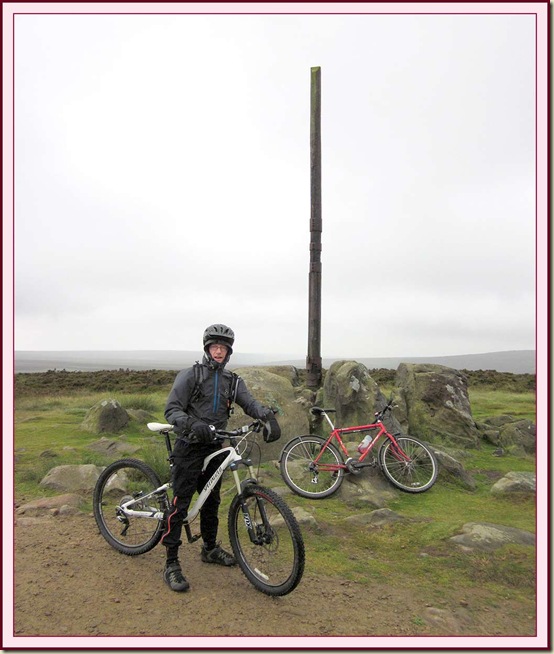 No, I’m not entered for the Cairngorm Challenge. But Richard is entered for the 100km Gold Route, and is trying to build up his fitness for the event on 10 September.  Given the forecast for rough weather, I’d suggested he got some miles into his legs by doing a 65km circuit from home using the canal towpaths and the Trans Pennine Trail, but he insisted on a Peak District rendezvous.

So, we assembled at a picnic spot near Robin Hood’s Cave, below Stanage, on the outskirts of Sheffield.

To our surprise, it wasn’t raining, but the light was flat and very few photos were taken.  Amazingly, Richard’s route was fairly dry, despite yesterday’s rain, although about half of it was along quiet tarmac lanes.  The off-road sections were superb, and no uphill pushes were needed, though he did choose an exceedingly technical descent back to the cars from Stanedge Pole (see points 5 to 1 below).  Richard’s full suspension coped better than my rickety old machine, from which I had to dismount for safety a few times on the rocky sections with drop offs.  Next time I’ll take the easier track below Stanage Edge to join the road at point 327.  Nevertheless, it was good fun.

By the time we reached Stanedge Pole (pictured) on our figure of eight loop, it was indeed raining.

Just as well then, that we chose a relatively short outing taking only just over 2½ hours, as the rain got heavier whilst we luxuriated after the ride in Outside’s café in Hathersage.

Here’s the Anquet ‘take’ on our route – 25km with 666 metres ascent.  I reckon it could easily be done in two hours if you didn’t keep stopping like we did. 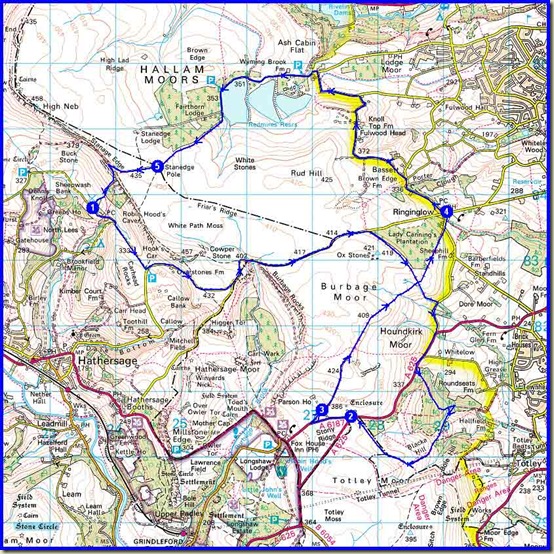 I used my ‘Garmin Gadget’ on this occasion, and it produced the following result:

Click on ‘View Details’ if you want to see the full works, and if you roll your cursor over the map you can change the scale.