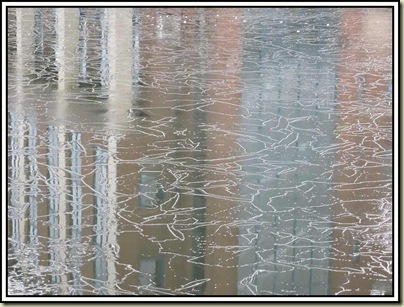 Over on Gayle’s blog are some impressive graphs concerning her activities during 2010.

So I thought I’d work out some statistics for my own 2010 activities.

But the statistic I like best is the number of days I managed to get out – excluding walks under 5km, bike rides and most of the jogging – it comes to about 150 days, from which I conclude that I’m well and truly retired!  Perhaps even a bit tired!

It’s cooling down again here in Timperley.  The slight thaw produced a little surface water on the frozen canal, which has re-frozen to form an attractive ‘shattered glass’ effect.  It’s now about 3 inches thick, so is fine to walk on, apart for a few thin patches and the fact that it’s incredibly slippery.

Plans for 2011 are on the drawing board, but some of the above statistics will take some beating…