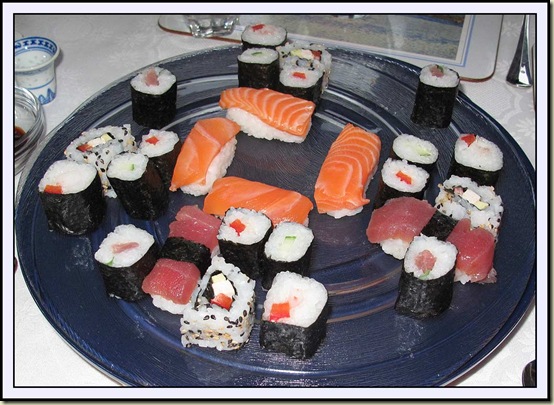 Bank Holiday weekends:  we usually are either abroad or we stay at home and avoid the crowds.  This weekend, at home preparing for the next trip, we enjoyed a few rather enjoyable interludes, and we did avoid the crowds.

Friday night saw our house minders, Andrea and Thomas, here for a meal.  They even brought the starter, pictured above, with them.  It was delicious, and we suspect it took them longer to prepare the sushi than it took us to cook the rest of the meal. 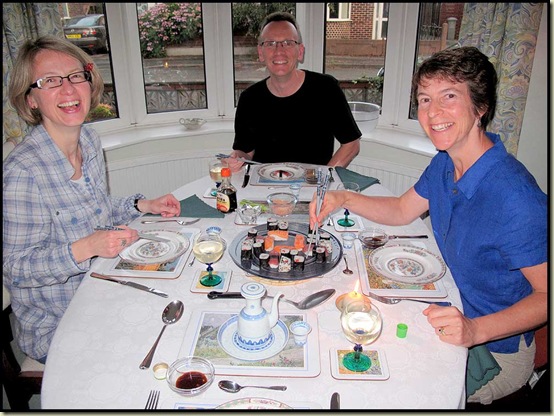 Saturday brought a visit from Kate and Jake, now 18 weeks old.  Holiday weekends draw lots of railway enthusiasts to the track around Walton Park, which is a short stroll up the canal from home.

I suspect young Jake will enjoy a few visits to this spot in days to come. 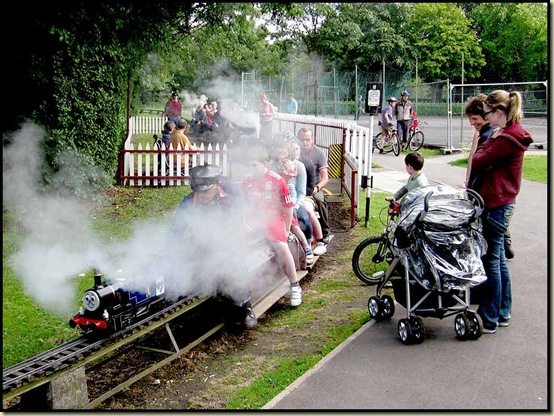 The gardens at Walton Park are in good form, there’s plenty of space for games, and there are some new climbing frames for young and older children.  A fine amenity. 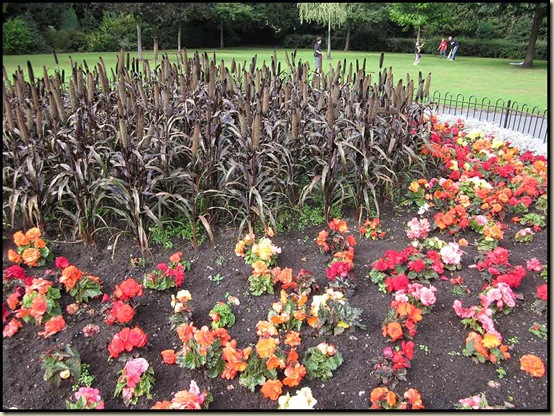 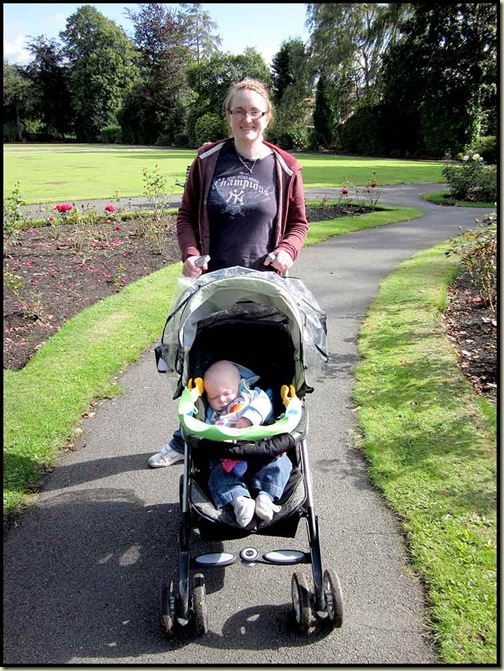 Saturday afternoon saw me heading off to Monsal Head, where Terry had arranged a ‘meet’ for bloggers and others, also attended by some outdoors suppliers such as RAB and Terra Nova, and by Gareth from Webtogs, who supply several of us with outdoor gear for testing and review.

After a beer with Mick and Gayle (they needed one after discovering Monk’s Dale earlier in the afternoon), we joined a throng at the nearby campsite.  It drizzled.  Mick was testing a rather gaudy yellow ‘weather resistant top’. 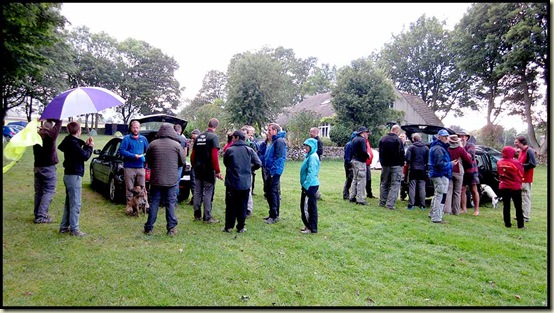 Gareth demonstrated several ‘Nemo’ tents from Webtogs’ lightweight tent range.  This one weighs under two kilos and has inflatable poles. 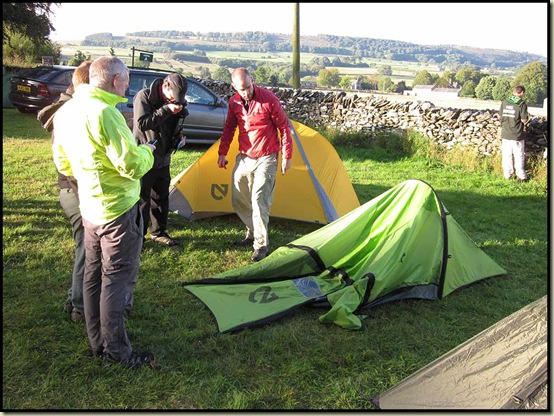 Mick and Gayle tried out the 1.4kg Nemo Obi 2P tent and thought it may be a little tight for them.  These are interesting tents from the USA.  I’m curious to find out what the professional reviewers think of them, and I’m looking forward to borrowing the Obi 1P Elite from Webtogs to test and review, hopefully in the Autumn. 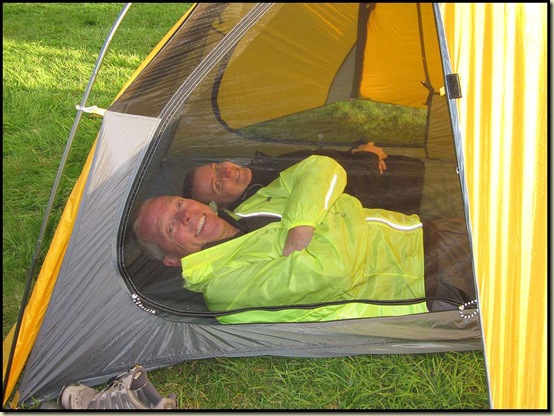 Mick continued to test the top to which he has become seriously attached.  Gareth wondered whether it doubled as pyjamas…

Meanwhile, a rainbow appeared through the drizzle. 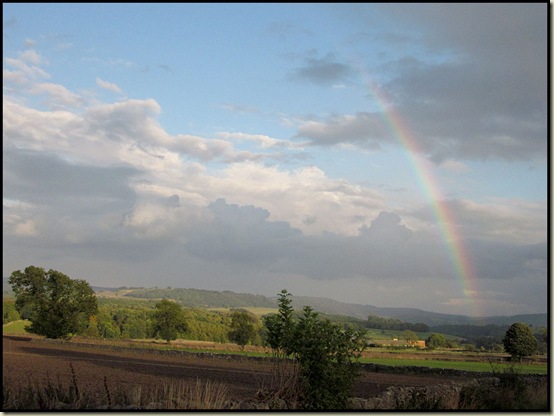 The viaduct at Monsal Head has appeared before on these pages.  It was a rather dull sunset on this occasion, principally because the sun had gone down before Jamie and I reached the viewpoint. 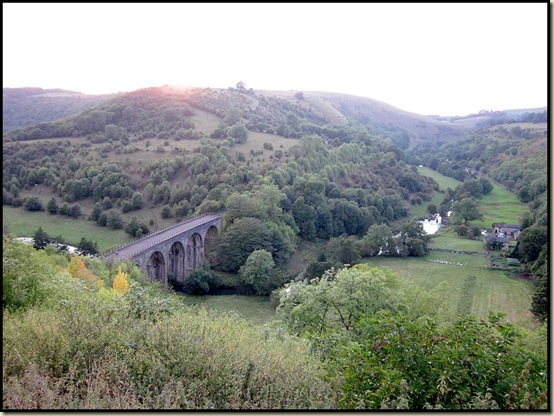 It was good to meet Jamie, another blogger, for a little longer than our previous encounter in Sainsbury’s, and to discover that I know several of his work colleagues.

It was also good to meet fellow Webtogs tester James and his dog Reuben, and various others who were enjoying the meet.

Sunday afternoon saw Sue and me back in the company of A + T, this time at Altrincham Beer Festival. 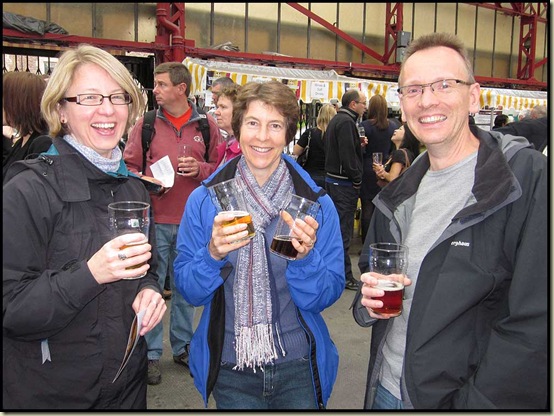 There was a fine array of beers, and some Spanish and Indian food.

A young train driver entertained us with some ‘tales from the driving seat’.  He was (refreshingly) breathtakingly enthusiastic about his job.

“Do you want my old bike” texted Dave on Sunday afternoon.  He’s gone through a rough time recently with his elderly dad, and deserves a treat – in Dave’s case, a new bike.  So Dave’s five year old Specialized Stumpjumper FSR Comp was up for grabs.

I’ve been pondering about getting a new bike for a while, and only the enthusiasm at my local bike shop for my old steel bike stopped me from getting a new one late last year.

I couldn’t resist the temptation, so Monday morning saw me meeting Dave and exchanging a piece of paper for ‘Stumpy’, my new full suspension bike.  I’ll be keeping the old Shogun Trailbreaker for the flatter local rides, but Stumpy, with its full suspension, should be great for the ‘rougher’ stuff. 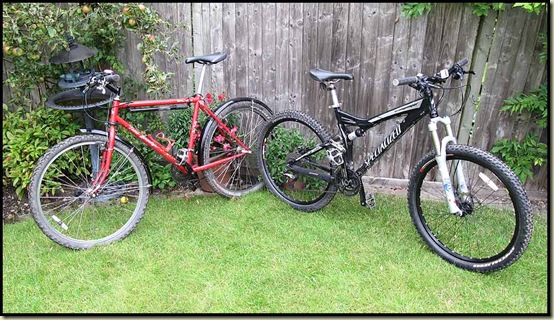 I’ll be getting a few extra bits, like mudguards, so the appearance may change a bit, but I’m looking forward to using this new ‘steed’.

All in all, a very pleasant Bank Holiday.